An extra walk for me having been invited by John Lockey to join the Gosforth Green walkers for a day on Hadrian's Wall. How could I resist, always enjoy the wall walks. A group of ten, mixed but mostly mature, we met at the car park at Housesteads, probably the most popular place to visit on the wall as it has a shop, a museum and a fort.

Reached by going west on the A69 turning north just beyond Hexham and going through Acomb and Wall to Chollerford. Continue for some miles on the B6138 (Military Road) to the car park on the right at Housesteads. Run by the National Trust the car park relies on number plate recognition to charge visitors. Pay as you leave, more about that later.

The map for the walk is OS OL 43 Hadrian's Wall but is not essential. 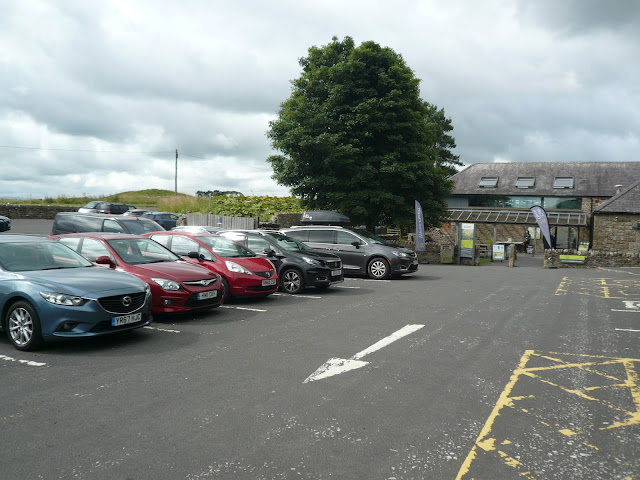 We started the walk from the car park, going between the shop and the toilets, past the slide and on to the gravelled path that climbs uphill to the museum, the fort and the wall itself. Not having a ticket for either we passed the museum and the fort entrance to a gate that took us to the Hadrian's Wall Path which at this point is also part of the Pennine Journey, a long distance walk not to be confused with the famous Pennine Way. We headed east alongside the fort which the Romans called Vercovicium. 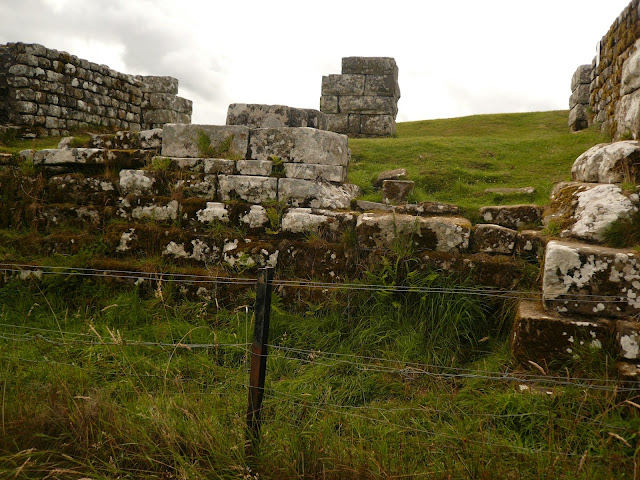 The footpath crosses the wall itself as the route climbs up and down, carefully designed to keep those legionnaires fit and healthy. It passes one milecastle and several turrets before reaching Sewingshields. 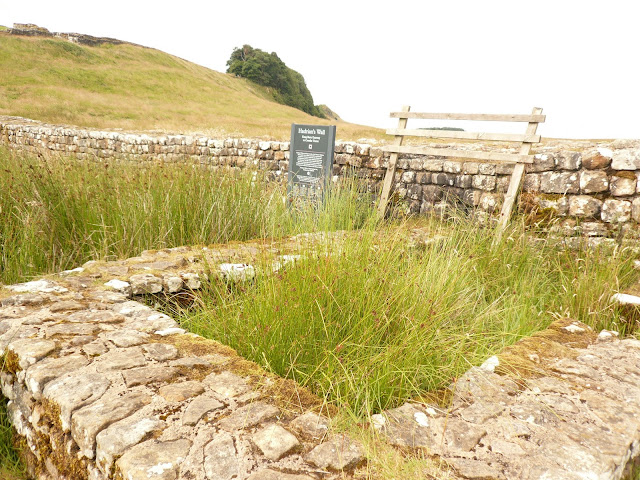 Wall and turret number 35B. (Milecastles and turrets are numbered from east to west)
Sewingshields has nothing to do with clothing, it comes from Old English "Sigewine's Shiels". A shield being a little hut. At the farm we took the gravelled road downhill. On the right, looking carefully it is possible on a good day to see the outlines of Medieval Fish Ponds. Today we saw a large bull in one field and a small collection of trucks, trailers and sheep in another. It was thought there was going to be a sheep dog trial but there was no sight nor sound of dogs. 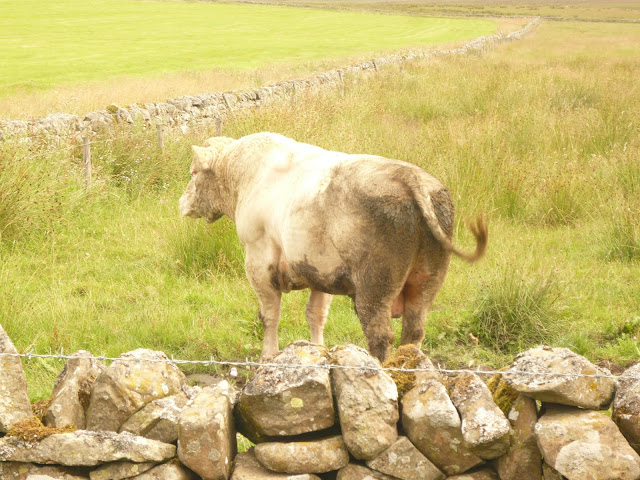 He would not pose for a photo
Someway beyond the last field, and a bit hard to spot, we took a path on the left that crosses open country below the Sewingshield Crags, Kings Crags and Queens Crags. 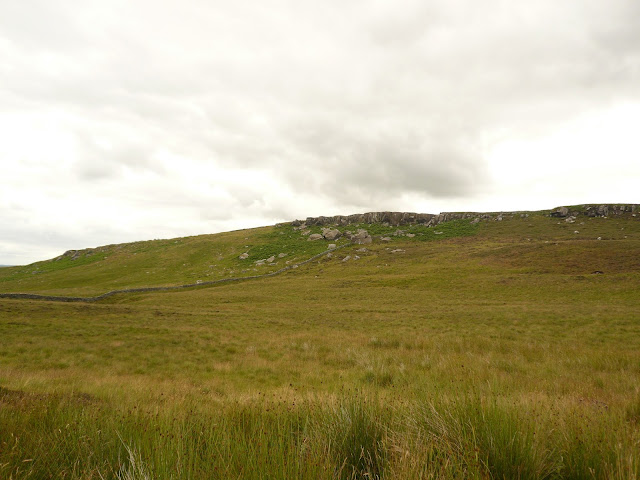 Sewingshield crags. The wall is on the edge of them.
Finding a group of rocks we halted for lunch, the Greens not being familiar with holding a Herbie there was no sharing. Probably as well as there were ten of us. 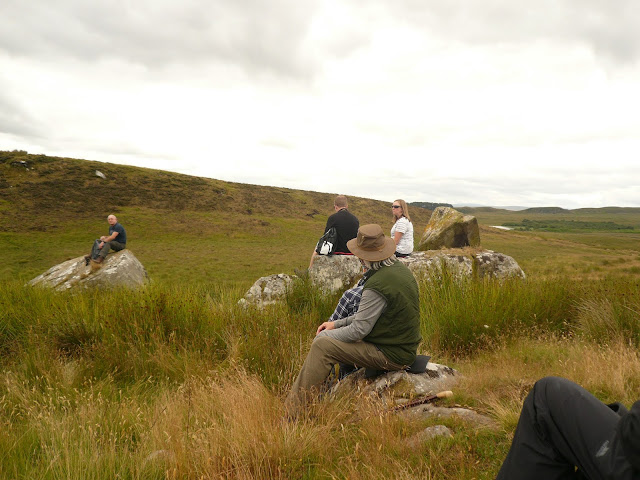 Lunchtime with the Greens.
Moving on after lunch we followed the path which goes between Broomlee Lough and Greenlee Lough until we met the Pennine Way, the longest of Britain's long distance footpaths. 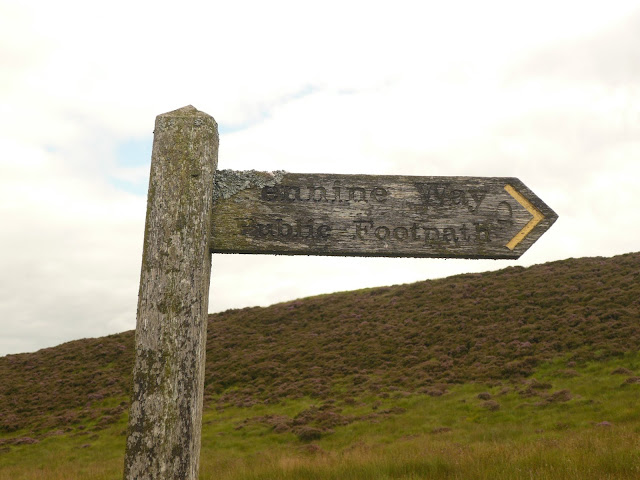 Self explanatory.
The Pennine Way path climbed fairly gently up to the wall. On reaching Hadrian's monument we turned left and headed east up and down a few slopes back to Housesteads. 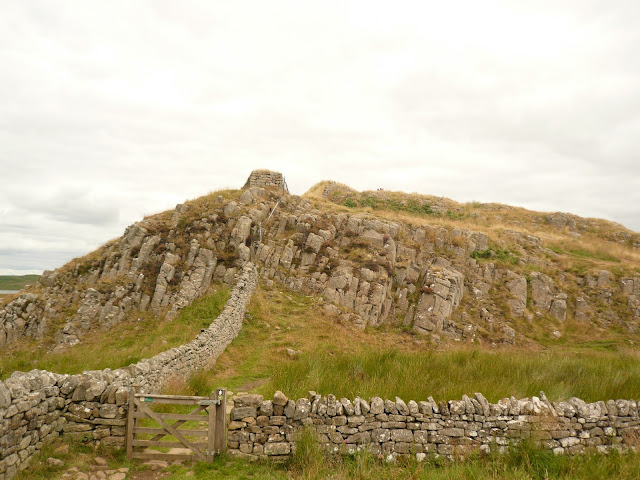 Back on the Wall Path. The dry stone wall on the left is of much later construction and marks the division between fields not territory. 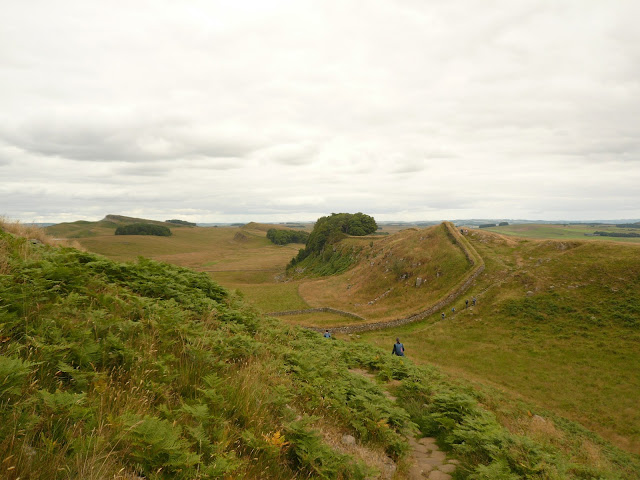 Looking towards Housesteads. That is the wall this time. 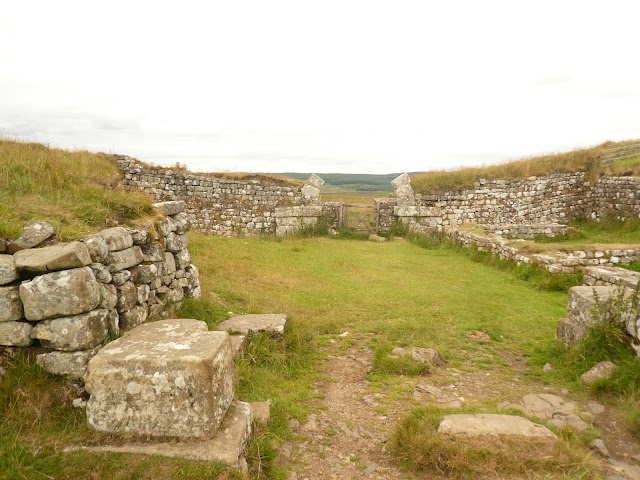 Milecastle 37, showing the northern gate which led into the land of the barbarians, or Scots. 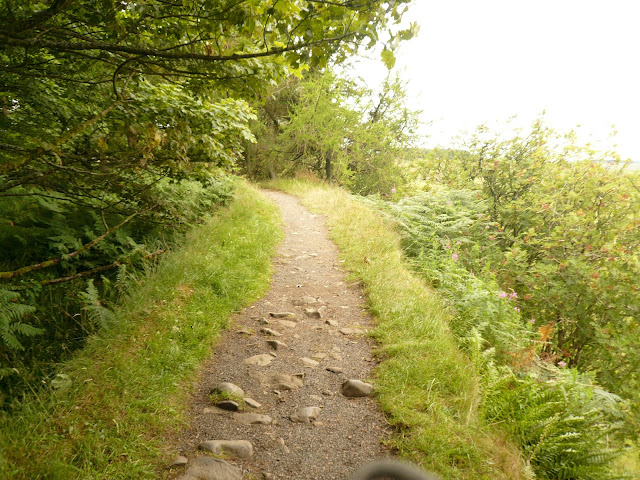 One of the few places where you can actually walk on the remains of the wall, approaching Housesteads.
Back at the car park we tackled the National Trust park and pay machine. We were required to punch in our car registration number. The machine then showed the amount we needed to pay. Payment by card only, no coins. For five hours parking John and I paid £7, a couple who had arrived ten minutes before us were charged a disgraceful £9. The lady who had a personalised number plate (Like M 1 KEY) confused the machine and she had to negotiate an agreed time. Considering the number of cars in the park the National Trust must have taken a small fortune. And it's a charity.
We called in at the Errington Coffee Shop on the way home. It used to be a pub and restaurant but now serves teas and bottled beer. Very nice too and it's built on top of a gateway in the wall. 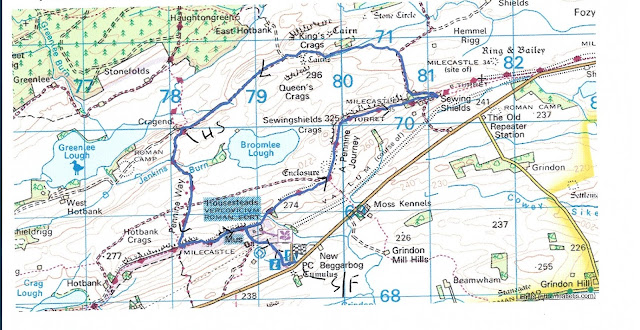 Contains OS data, copyright. Crown copyright and database right 2021.
The walk is about 7 miles with some short steep climbs and plenty of people. 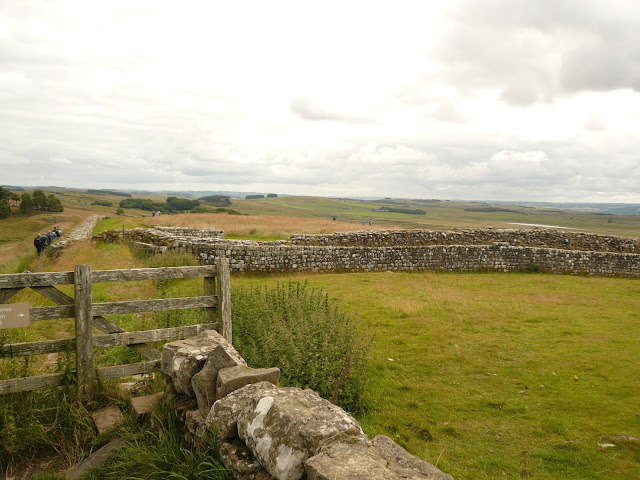 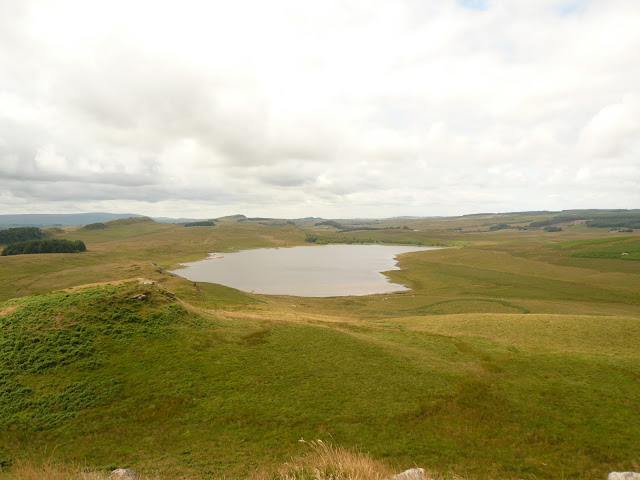 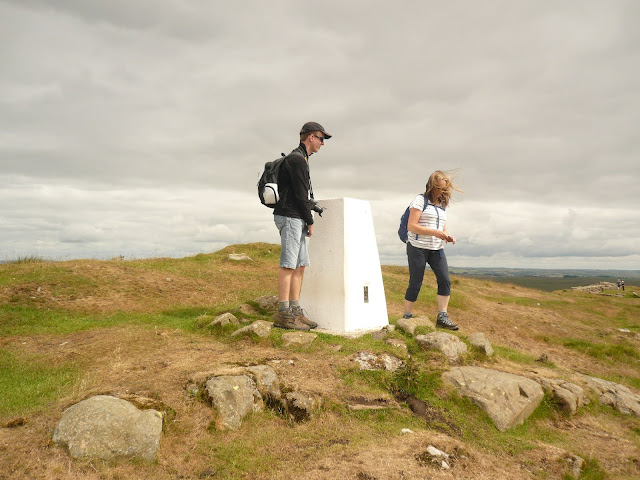 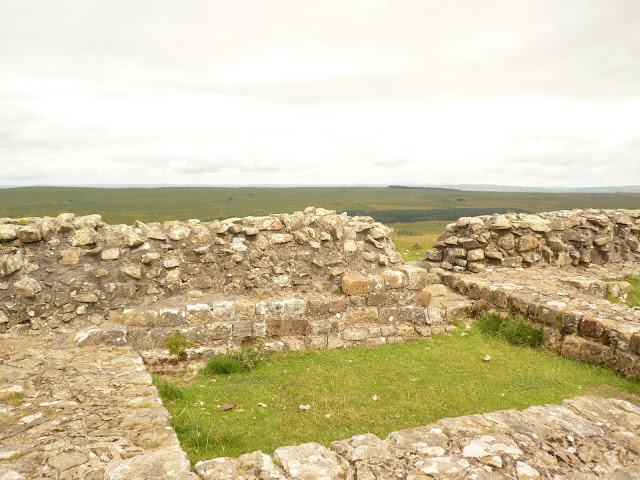 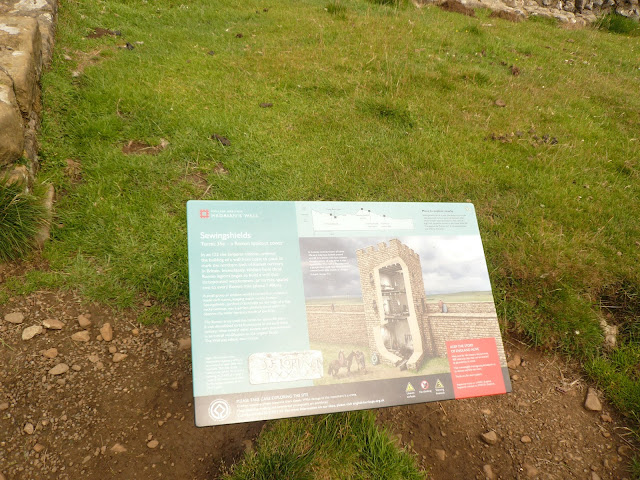 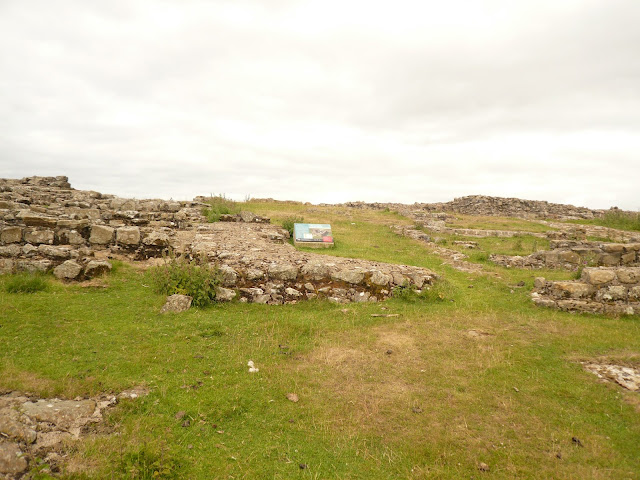 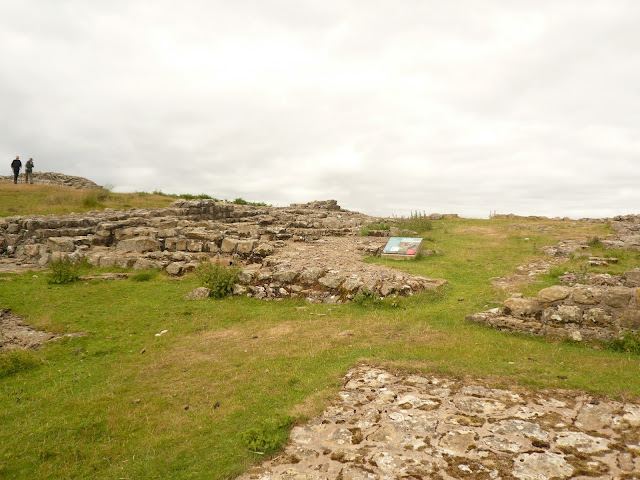 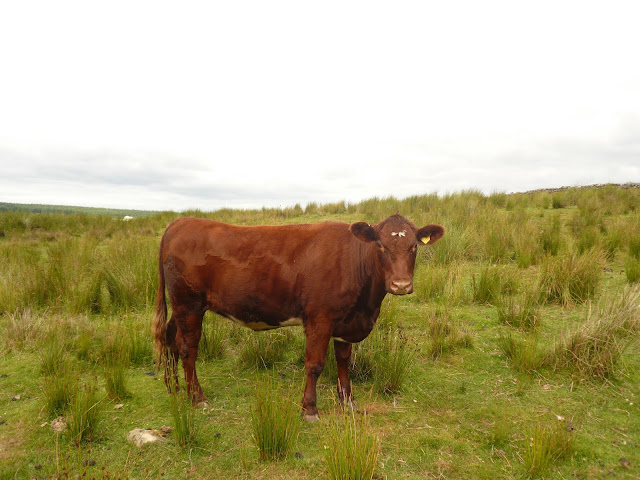 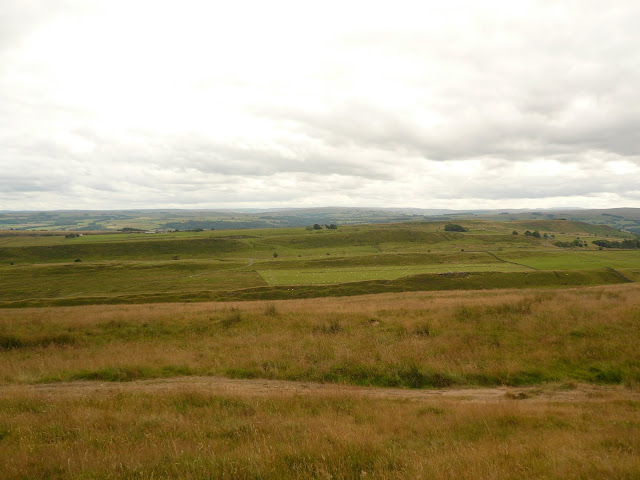 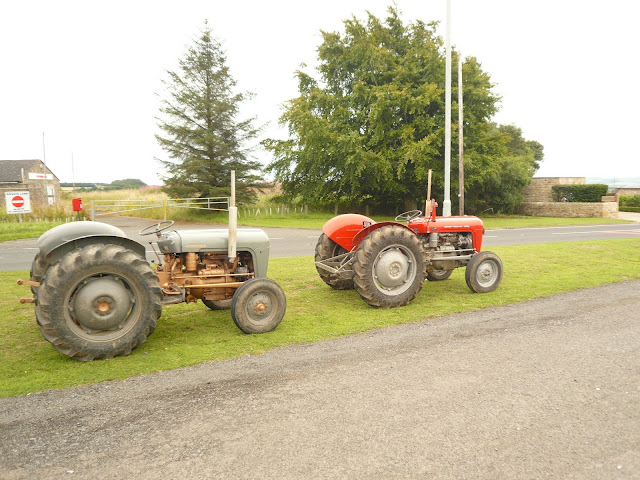 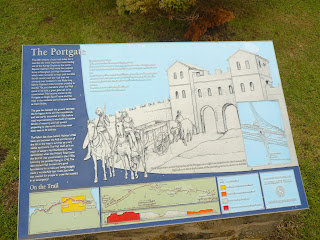