Back to the coast. (Northumberland) August 27th

After the long country walk the gadgies are back at the coast, repeating a favourite walk from Seahouses Farm near Howick. (Not to be confused with the town of Seahouses.)

Six in the team; Brian, Margaret, Harry, John Ha., John L and me.

The walk is covered by OS  Explorer 332 Alnwick and Amble.

To get to the farm A1 north, turn east north of Alnwick, through Denwick, through Longhoughton, past the car park for Howick Hall and down to the sea. There is limited off road parking. 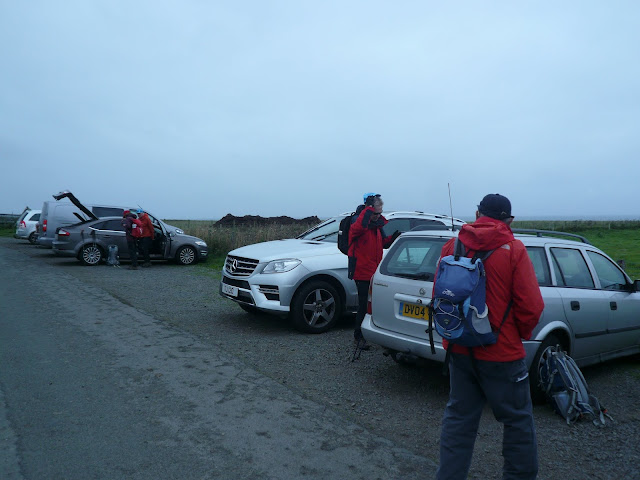 Car park at Seahouses Farm on a gloomy morning.

From the cars we headed south along a track to Iron Scars, turned through almost 360 degrees and headed north on the recently refurbished footpath/cycle path to Craster. 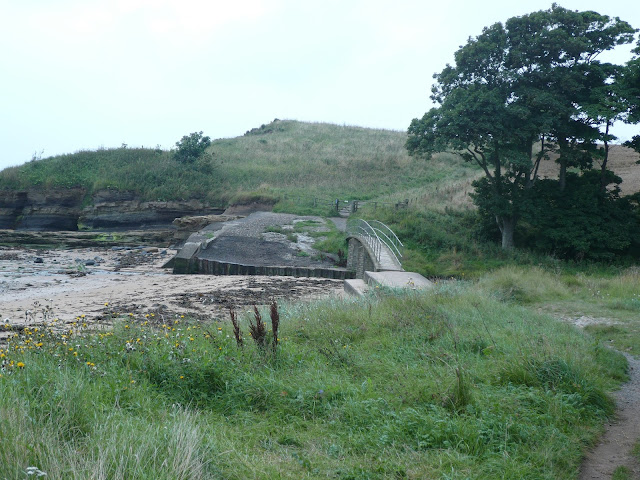 Iron Scars.
On the way we passed the bathing house originally built for the ladies of nearby Howick Hall. There are steps down to the water too. Now it is a holiday let. 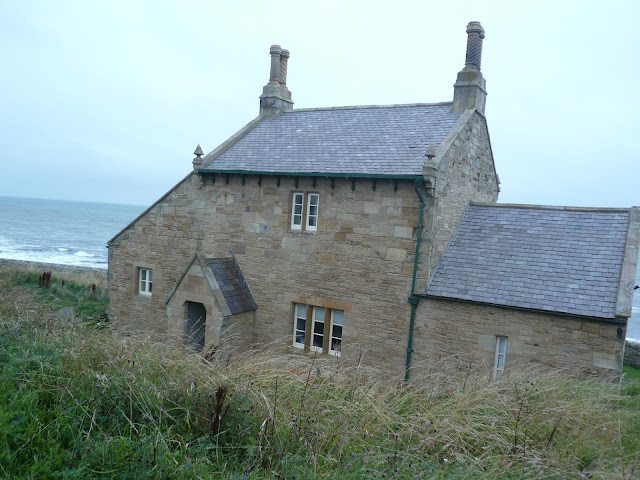 Bathing House near Howick Hall.
Our usual coffee shop in Craster, the Shorline, was crowded so we carried on, passing the Jolly Fisherman and the harbour. 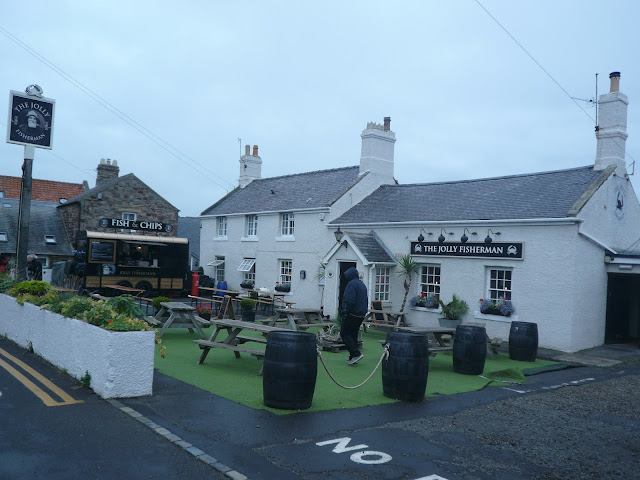 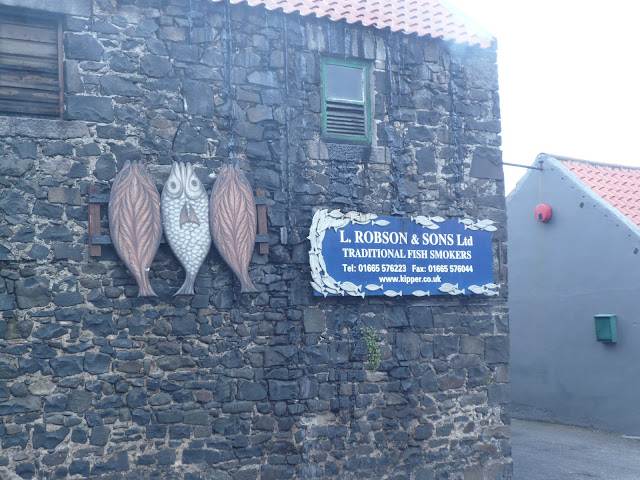 We're having kippers for tea 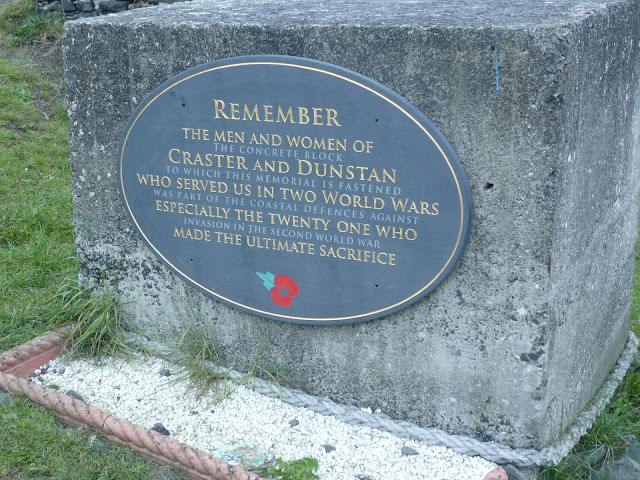 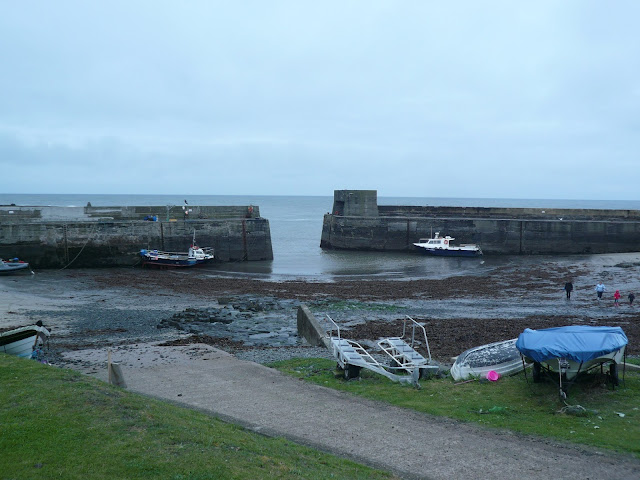 Craster harbour.
From Craster we followed the crowds towards the ruin of Dunstanburgh Castle, built by the Duke of Lancaster. 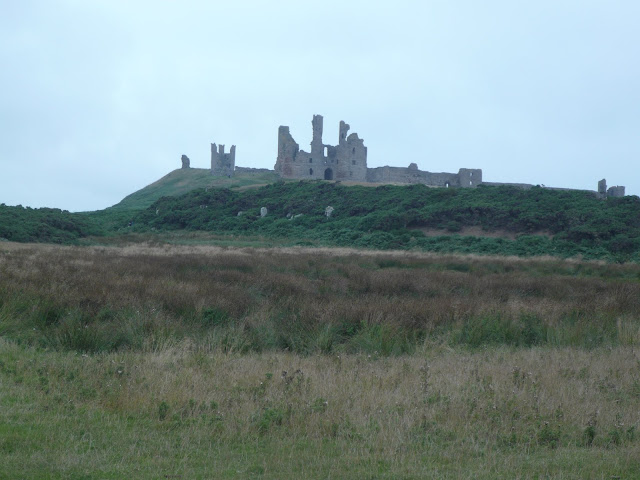 Dunstanburgh.
We took the footpath to the side of the castle and eventually walked down to the beach, leaving the Northumberland Coast Path/ St Oswald's Way to continue our journey on the sand. The sand was wet but firm and the walking was fairly easy with a bit of shallow plodging.
At Low Newton by the Sea we stopped for a Herbie. 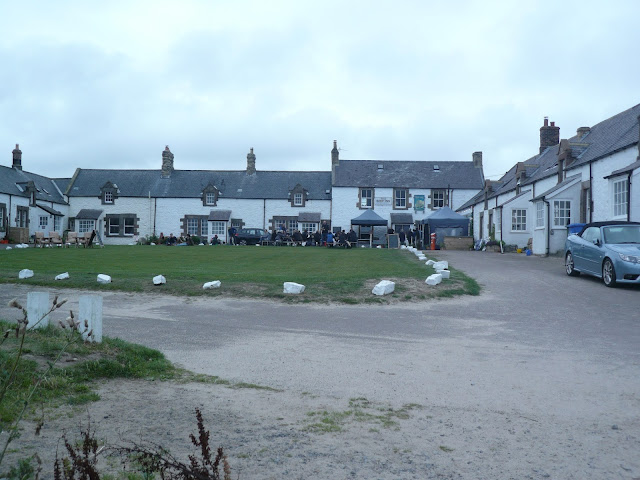 The square and pub (The Ship) at Low Newton. We shared apple pies, savoury flapjacks and lemon cake from Mrs A, marmalade cake and chocolate biscuits.
At this point my camera gave up for some reason so no more pictures today.
Lunch over we went behind the square and took the path towards the bird hide at the nature reserve but didn't stop . The path continues through the golf course and a collection of weekend cottages to the parking area close to Dunstan Steads. Up the road and left at the farm walking along the concrete strip that is supposedly a tank path from WW2, until we reached Dunstan Square. Turning right along the road we soon reached Proctors Stead and the village of Dunstan.
Turning left at the end of the village we past Craster Tower and reached Craster South Farm. From here we crossed fields to the car park at Howick Hall and turned left to walk the road back to Seahouses Farm.
On the way home we re-hydrated at the Ridley Arms in Stannington. Farne Island Blonde went down well. 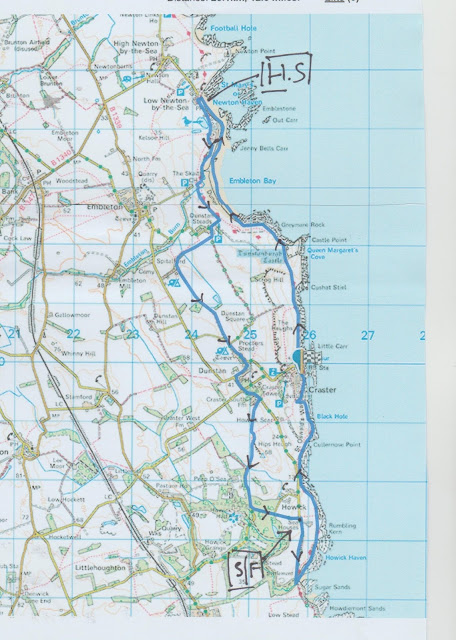