Troublesome wind   August  26th
Take a head torch, who knows.
For this walk we were joined by Brian. Strictly speaking he is not a Gadgie until January 2012 when he gets his bus pass but is welcome, if only for his dreadful puns.
The walk is from Hepburn Wood by way of Ros Castle, Cateran Hill, Harehope, Blawearie and back to the wood.
From Newcastle take the A1, go through Alnwick, turn left at the castle entrance, saying "Hello Hogwarts " or "Hello Blackadder" and follow the B6346 through Eglingham and Old Bewick.  About one mile after Old Bewick take the right fork and after two more miles a signpost points to Hepburn Wood on the right. There is a carpark with a noticeboard, useful to sit on when changing into your boots.  (On OS Landranger 75 the carpark is at 071 247)
From the carpark a forest track leads into Hansel and Gretel land but to avoid being captured by an ugly witch take the path which is a few yards down the track on the left. This steep path leads up  through the wood and after a bit of a scramble there is a hill fort.*
As I said, Dave is an archaeologist and can explain stones and things. "That's your fort for the day," quipped Brian.
A path leads through the heather and crosses a minor road and continues up to Ros Castle. There is a viewpoint with four plaques pointing in the directions of all the things you can see if it is a clear day. You can also look down on the famous White Cattle in Chillingham Castle, probably the safest place to view them as, apparently, they have never been tamed and domesticated. Personally I think this is put about to get people to visit the castle. You can probably buy wild cattle cheese and icecream in there too.
From Ros Castle a hardly existing path leads almost directly eastwards  through the heather between two plantations. At the  far corner of the northern plantation turn roughly South East and cross the fields to a minor road. Hit the right gate and on the opposite side of the road is a sign post pointing in the direction of Cateran Hill. Follow it and after about a mile turn left on the track that leads up to the cairn. This, as young lady columnists would write, IS WHERE IT GETS INTERESTING. ( Have you ever noticed that young lady columnists tend to have at least a couple of young kids so that they can discuss the school run, mock their helicopter parent friends yet secretly send their own brats off on spelling bees and walks in the country like this)  I digress.
Near the top of Cateran Hill, off to the left of the path by about 100 yards is the Cateran hole. This natural fissure is quite difficult to find but is worth the effort. It appears to be a hole in the ground but hidden by bracken are a few steps that take you down into the narrow cavern some 200 yards long.  It is damp and mossy but worth a visit. At the entrance when we went today there was a plastic folder containing a poem written about the hole and by the local McConagal.  It is also a good Herbie spot.
Cateran comes from the Gaelic and means "hairy Scottish Highlander Warrior".  They probably hid here in the days of border wars, stashing their whisky and sporrans for a good party after a bit of local rape and pillage.
Back to the path and follow it over the hill. As you approach a farm track there is on the right a lonely looking Rowan tree Next to it is a small enclosure with a memorial to a young man who died at the age of 28 and a stone to "Doogie" who lived for 5 years, perhaps he was the young man's shepherd dog. On to the track and turn right, just before it becomes a tarmacced road turn right through a small wood and wander the path to Harehope. a farm and small collection of cottages. Turn right through through a couple of gates and take a meandering path past another fort for the day until you arrive at    Blawearie.**
This tumbledown farm has not been occupied since the 1940s. Harry says he has a picture of it that he took about 30 years ago and it had a roof then, now it has walls, the remains of a netty and a couple of swings put into the trees. They look quite new.  Stan Beckensall wrote books on Northumberland place names but seems to have been beaten by Blawearie. Godfrey Watson reckons on "Troublesome Wind" and it is a rather bleak and isolated place so hats off to you Godfrey.
Behind the remains of the house atrack leads North East, follow it but take the first track on the left and wander across a heather moor to Hepburn Woods. Keep close to the edge of the wood and back at the first fort follow the rough path back to the carpark. 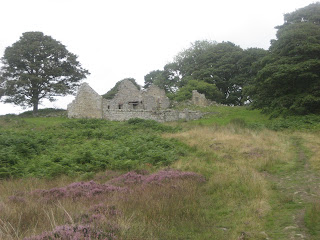 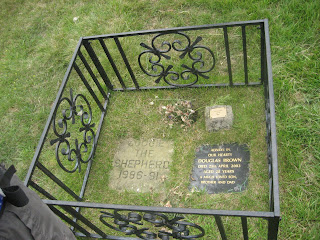 The memorial to Doglas Brown and "Doogie" the Shepherd.

On the way back to Newcastle the Tankerville Arms in Eglingham is worth a visit. Food, real ale and friendly staff. Sadly I was driving.
Some of us wear pedometers on our walks, it is quite legal.
They vary considerably and result in much discussion. Mine said the walk was 8.188 miles but I thought it was a good 10. I measured it on the map with a precision built German map measurer as 9.3 miles so I reckon with a bit of wandering 10 is fair enough. Anyway it felt like 10 .

*There are many hillforts in Northumberland. English Heritage has published Hillforts; Prehistoric strongholds of Northumberland National Park by Al Oswald et alia.
** Google it, get all the details. I think that the farmer had three young daughters, Under different circumstances we could have had Blawearie Heights; The Tenant of Harehope Hall or Jane Armstrong.  Thosands of Japanese tourists would have thronged to Northumberland instead of Haworth and" Pig o'le door" would have a different name.
Enough

To be a gadgie you need the following:
a bus pass
a pair of walking boots.

Other things are useful too, waterproof clothing sometimes, a rucsac, maps and a
laminator.

This is one of my favourite "easy walks" in the Cheviots.  To get to the start from Newcastle take the A697 and turn off at the sign for North and South Middleton. Follow the minor road past North Middleton  farm, through a ford and turn left at the signpost for Langleeford.  Follow this even minor road through the delightfully named Skirl Naked* down a steep hill to a small grassed parking area on the right just before Carey Bridge. (GR 977250 on OL 16)

On August 19th this year there are only three gadgies out walking, me, Harry and Dave.
Harry is a retired engineer and is terribly practical and a good photographer, Dave is a retired archaeologist and knows a lot about piles of stones and birds, and I know little about lots but drift along quite happily. Sathnam Sanghera, Times columnist, told me  once that I wrote well  but didn't publish my views on living with a vegetarian which was a shame really because it is one area in which I am an expert.

But Hey, as young lady columnists like Carol Midgely say when they want to make a point, WHAT ABOUT THE WALK.

On the carpark side of the Carey Bridge there is a stile and a signpost. Cross the stile and follow the burn. This path is not marked on OS maps but is very easy to follow and presumably has become official by popular use. After crossing a field the path sticks close to the burn in a narrow gorge, more like the Lake District than the Cheviots. As you approach a wood watch out for adders, particularly on warm days. We  found a couple  closely entwined one warm April day and thought the adders were multiplying but later discovered they were two males having a supremacy struggle. If Dave had known more about snakes and less about birds he could have told us this.
Stay alongside the stream to a footbridge and cross it, pausing to look down the burn, it is beautiful and you might see a dipper.
I asked Harry to throw my ashes in the stream here if I finally hung my boots up before him and would he please play "Kathy's Song " by Simon and Garfunkel as I floated away. 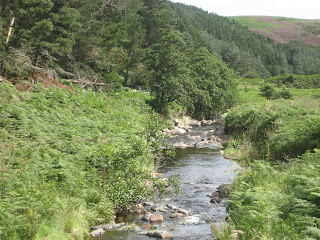 Looking down the Carey Burn from the footbridge.

Having crossed the bridge follow the path across open land until Broadstruther comes into view.  This old farm was in a poor state for years until somebody acquired it, rebuilt it and made it into a lodge for grouse shooting parties. On August  19th it was locked and deserted. No grouse ?No shooters ? The cuts ?
It is a good place  for a Herbie stop however. (Gadgie slang for lunch, used to be a "Mike and Harry's" but time moves on. 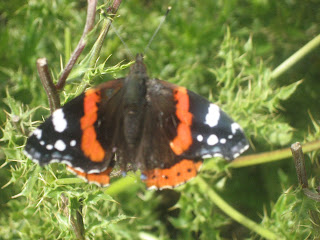 I was going to insert a picture of a Red Admiral butterfly by Harry here but had difficulty getting it out of its little file so this is one by me.


Leave Broadstruther and follow the path that runs roughly south until you approach a fence and stile. Decision time. Turn left and follow the fence line up Cold Law or continue across the stile and stay on the path which comes down Hawson Burn into the Harthope Valley near a grassed parking area, which is what we chose to do.  Turn left and stay on the road for about a quarter of a mile before turning up Cockstraw Syke. This path leads at a steady gradient to the summit of Cold Law. Look west at the Cheviot plateau, south to Hedgehope and on a clear day the distant Northumberland coastline, Farne Islands, castles and fleets of invading Vikings. The view is worth the climb even when the peace is shattered by an RAF Tornado.
Follow the fence line in a North East direction until you come to a small wood with a bird trap in it. These traps are designed to capture members of the crow family which supposedly feed off the young grouse. They have been known to catch birds of prey. We found one once with a dead Short Eared Owl in the doorway. Out of season the door should be closed and the entrance on the top closed by boards but this seldom seems to happen. Turn East and follow the path which will lead you back to Carey Bridge.
At a little over 8 miles this is a good gadgie walk, not too demanding and very scenic.

* There are several books on Northumbrian place names Godfrey Watson in Northumberland Place Names, Goodwife Hot and others suggests Skirl Naked comes from its exposed position, Stark Naked.   I had fondly imagined some addle brained Scot played the pipes there wearing nothing but a grin.