After last week's walk in the Lake District we have opted for an easier local walk today. There are six of us out today, John, Harry, Ben, Brian, Dave and me. The walk is a variation of "Belford" from about two years ago and not surprisingly it starts in the small Northumbrian town of Belford which is easy to find. From Newcastle head north on the A1 until, beyond Alnwick, home of the Duke of Northumberland, and turn left at the signpost for Belford. There is a small café, The Well House, which serves a first class bacon sandwich in a choice of bun, with brown sauce if requested, and tea served in a willow pattern teapot and drunk from delicate cups with the same design. Everybody's granny had willow pattern tea sets!.
We left the cars outside the Belford Community Club at  GR NU 106338. The walk is covered by OS Outdoor Leisure Map 340, Alnwick. 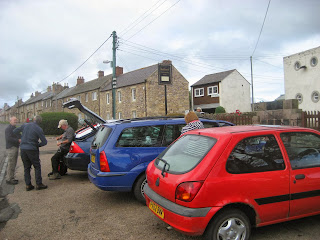 Preparing in the park.
We took the lane on the left hand side of the club and walked towards Craggy Hall. This time of the year the hedgerows are full of blackberries, it is a good year for them , wet and warm. On the right hand side of the lane near Craggy Hall are some quite impressive crags, hence presumably, the name. Ben, who has an interest in geology, explained their formation and later even produced a geological map of the area. I should listen more carefully, then I could explain these extrusions. (1 mile)
After walking through a wooded area we came to a junction and realised Brian was no longer in sight, he had walked ahead from the start. Having done this walk before we knew he would have turned left and so did we, following the lane until we came to the farm at Swinhoe. 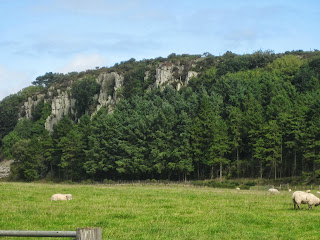 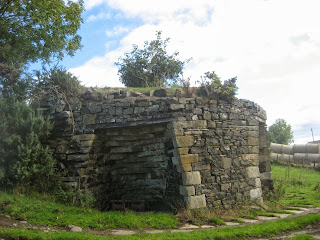 And a lime kiln.
At Swinhoe we turned right and headed north west along  the lane towards Swinhoe Lake. (2m) 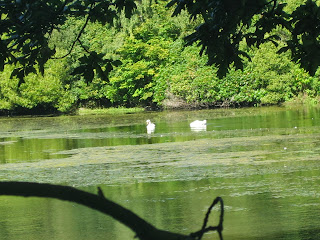 The swans of Swinhoe. Swinhoe means "swine hill" Belford,
surprisingly, may come from Bel-Haga Old English for
forest glade or dry land in a swamp. 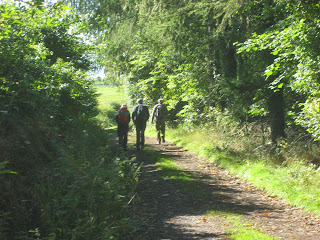 Gadgies in a glade. England in Autumn!
Leaving the woods around the lake we came across open ground  (3m) which afforded a superb view towards the sea and Holy Island. 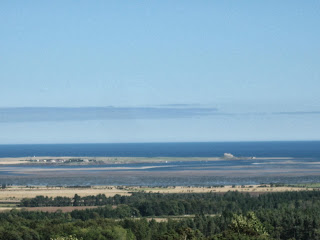 My pocket camera is not good enough
for seascapes but this is Holy Island!
Soon we were back in woods again, Shiellow Wood to be precise  but when we emerged into open land at Ravens Crag which gave us a panoramic view of the Cheviots we made a Herbie Stop (5m)although there was still no sign of Brian. A couple who were also having lunch said they had seen a man fitting his description striding out, sounded like Brian.
Fortunately I had remembered chocolate this week and we had Ben's superb home made ginger biscuits too.  Lunch over we continued on our way over the grassy moorland. Should you follow this walk take the right fork near Holburn Moss, a small lake teeming with teal, and climb up to the ridge. A trig point (6m) tells you you are heading on the right direction. 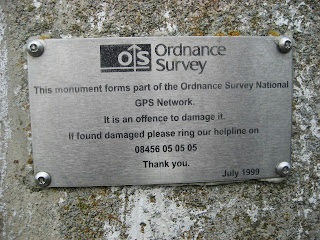 But do stop to admire the Cheviots. 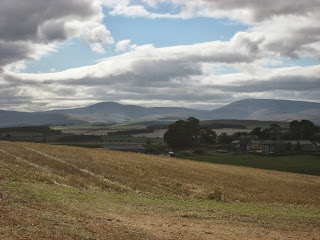 Not so distant Cheviots 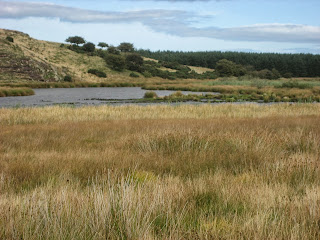 Holburn Moss.
Not far from the trig. point we crossed a style, climbed the short distance to a cairn and followed a path across fields until we hit the woodland near Swinhoe Lake again. We retraced our steps to the farm (8m). At the farm we followed the sign post that led us past the riding school, across fields and back to Belford, the path being well marked with 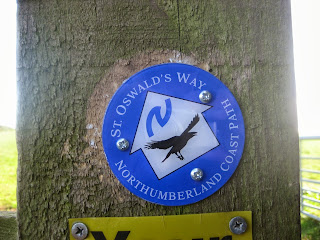 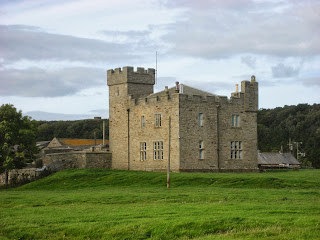 Westhall, possibly a peel tower.
When we arrived back in Belford we noticed Brian's car had gone. And at that moment my phone informed me I had an email. It was from Brian, he had completed the walk by 2.30 and gone home as he had an evening appointment in a pub. He had however left us some of Mrs As home made chocolate digestives tucked into the door handle of Harry's car.
To finish the day we called in at The Salmon Inn in Belford which served Hadrian Brewery Coast to Coast.   Four barrels because it was the only real ale, although it was in good nick!

Bird of the blog
Has to be the teal, there were so many, although we also saw swallows, martins buzzards, pied wagtails swans and mallards. 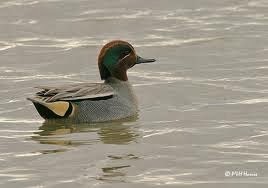 Beast of the blog, reported by Brian, a slow worm or legless lizard, and we've all been there. 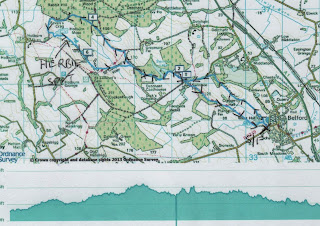 
Friday September 6th was so wet we cancelled the gadgie walk. This would never  have happened when we were younger, but when you are pushing seventy a wet day on the hills, or anywhere else is not so inviting.


There are five of us out today, Brian, Harry, Dave, John and me. A quintet of gadgies.


Friday the thirteenth of September would, according to our local jock weatherman, be cloudy but dry, and not too cold so we opted for the Lake District, planning to walk up Glaramara by way of Bessyboot. The walk starts at Seatoller which is a hamlet in Borrowdale, just before the road begins to climb up to Honister Pass.  Directions from Newcastle are simple: A69, M6 south, A66 to Keswick and follow the road signs to Borrowdale on the B5289. Membership of the National Trust is an advantage at Seatoller as parking is free with your NT card, otherwise it costs £6.50 for the day.


Of course we stopped at The Coffee Lounge in Keswick (First car park you come to in the town.) for breakfast, it still deserves five flitches for its bacon sandwich.


The Lake District has had a bit of a bad press this week. A man called George Mobius (or something) has said sheep farming should be banned on the fells as the sweet little Herdwicks overgraze and the area should be left to return to its natural state. I am told he writes for The Guardian, which explains a lot. With a name like Mobius he should be banned! (Mathematical joke).


Jeremy Clarkson, who writes for The Sunday Times maintains the Lake District is inhabited by bearded vegans who live in tents. There are two of us with beards, none of us are vegan although Ray is a vegetarian and we have camped in the Lake District so maybe he has a point. The Sunday Times used to be a good newspaper but has become obsessed with celebrity and money, filling many of its pages with tales of show business folk and rich Russians buying up London.


Moaning over, the walk: OS map OL4 The English Lakes North West Area covers the whole walk and the car park is at  NY 245137 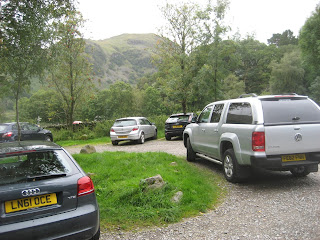 We left the car park and headed back towards Keswick, passing Glaramara hotel/outdoor centre on the left and the short row of whitewashed houses at Mountain View. Beyond them, on the right hand side of the road, near the campsite we took the footpath across the field that brought us out through a farmyard and close to the Stonethwaite church, St. Andrew’s. We turned right and walked past the school. 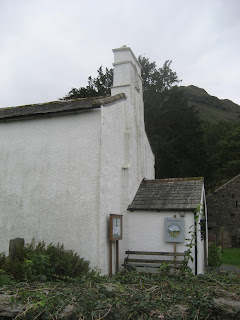 New Feature; this is the first mile of the walk. (Thanks to OUTDOOR GPS) and so far it has been level.


We passed the Stonethwaite Country Hotel and bar and close to the campsite, on the right, found the gate that would lead us up to Bessyboot. The gate is not signposted but it led us to a very steep path up the Little Stanger Gill on the north west side of Bull Crag. If you follow this walk be warned, the path has been beautifully “stepped” but is very steep and seems to go on for ever and there is a little exposure in some parts. (2 miles) We followed the path, crossing the gill quite high up and eventually emerged on the west side of Bessyboot. After a bit of dithering we scrambled to the peak. (3 miles) 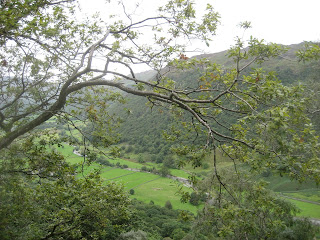 Looking down on to Stonethwaite Beck.
Note how well framed the fields are by the overhanging
branch! Could make the BBC Look North Calendar!
On the top was a young man (relatively young)) with a large pole attached to his rucksack and what was obviously a radio aerial, plus a walkie talkie set. Naturally we asked what he was doing. He was a member of a group called Wainwrights on Air or something similar. His job was to intercept messages from fellow members who were on the peaks of any of the hills mentioned in the great man’s books as verification of their ascent. Walking with a wireless! Sounds fun. 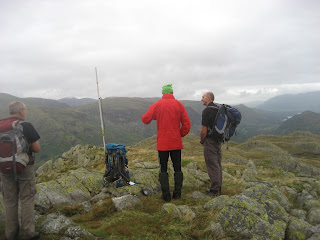 He worked at Heathrow but, not surprisingly, loved to get away to the Lake District. He promised to keep telling his friends in the south that the north of England was a land ruined by wet weather and a countryside besmirched by coal mines and shipyards, not to be visited. What a nice young man.


Having made all the jokes we could about Bessyboots, all clean and mainly involving Bessy Braddock, one time feisty MP, and Bessy Boothroyd, Blue Bell dancer and colourful Speaker of the House of Commons we continued on our way south across, or round, Rosthwaite Fell before heading south west towards Glaramara. (4 miles) We passed the Tarn of Leaves, which unfortunately gave me an Uhrworm for the day: The Talking Leaves, from Johnny Cash’s Album Bitter Tears, songs of the American Indian. Johnny was proud of his Cherokee blood he stated on the album, only to later admit that the claim was made to help sales.  At some point we  thought we heard a cry from Herbie so stopped for lunch which consisted of the usual, but I forgot the chocolate and Mrs A had not sent biscuits, Dave had not brought flapjacks either. The paths here are indistinct, if they exist, until we found the main one that leads up from Thornythwaite. 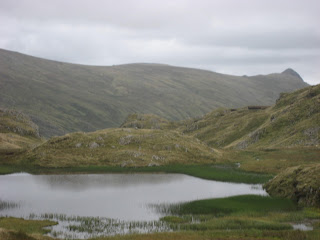 Approaching the summit of  Glaramara is a rock step some twenty feet high which provides a nice little scramble. There is a way round it to the right.


Once on the summit we looked around: Glaramara (5 miles) is not one of the highest peaks but gives exceptional views of many of the Lake District hills, making the effort worthwhile. And it has a beautiful name, like many of Cumbria’s bumps. I always think it sound Irish and conjures up an image of a little grey haired lady sitting by the peat fire in her house, reading a letter from her son in Boston who wishes he was back home in Glaramara eating praities and courting the dark haired  but rosy cheeked Mary.  Or Eileen. 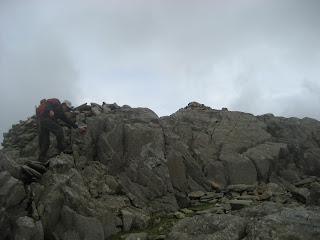 We had started the walk quite late and decided that rather go on to Allen Crags and back down Grains Gill to Seathwaite we should take the route directly back to Seatoller. To avoid scrambling down the step we walked a few yards west and then turned north, following the well worn footpath down the east side of Thornythwaite Fell (6 miles) until we met the farm track that is part of the Allerdale Ramble. (7 miles) Turning right we walked the short distance to the road, turned left and were soon back in Seatoller. (nearly 8 miles) 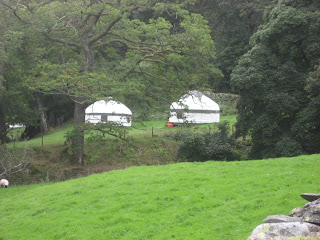 On the way home we stopped for refreshment at the Salutation in Threlkeld which had several hand pulled ales on offer but I was driving.

Bird of the blog:


Not a lot of feathered friends out today, several Ravens but they were done last time. 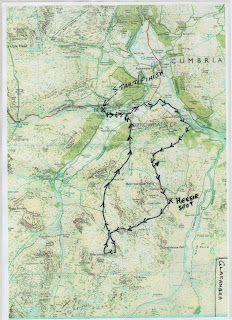