A wet walk from Warkworth. (Northumberland)

Hej Sverige.  So far this month there have been 1780 hits on the gadgie blog from Sweden, so Hello Sweden, thanks.

The forecast for the day was a few light showers. The walk for the day was planned as a rerun of a favourite seaside walk from Warkworth in Northumberland.  A pretty village  dominated by a ruined castle Warkworth is found by driving up the A189. Drive down the hill, enter the square on the left, drive past the church and there is a car park/picnic area overlooking the River Coquet. Free too and the picnic benches are helpful for booting up.

It is possible to do this easy walk without a map but it is covered by OS Explorer 332 Alnwick and Amble. 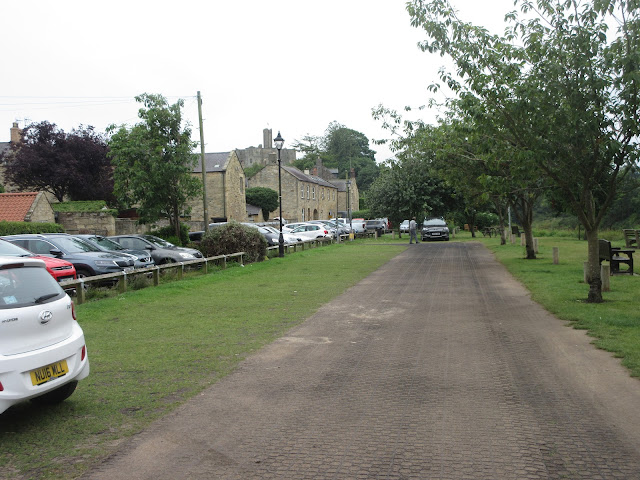 Car park. In fact prettier than the picture as it is next to the river.
Once the four of us were ready (Dave, Harry, John H. and me) we set off down the riverside path past the church. 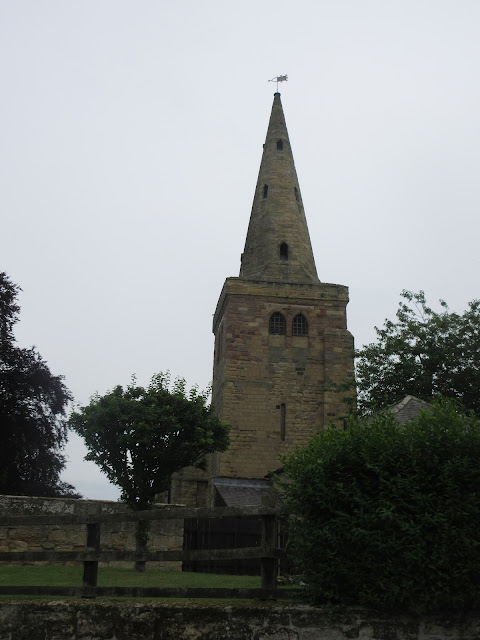 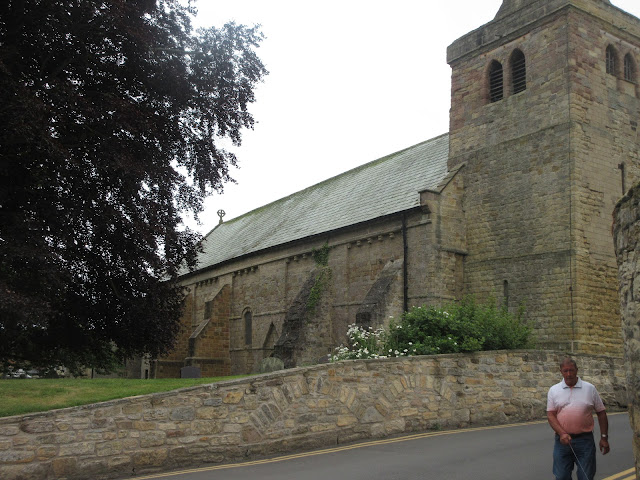 St Lawrence's church. An almost completely Norman church with later additions like the tower. Dave, archaeologist thinks it might have Saxon origins.
We followed the footpath to the old bridge which is protected by an equally old gate. 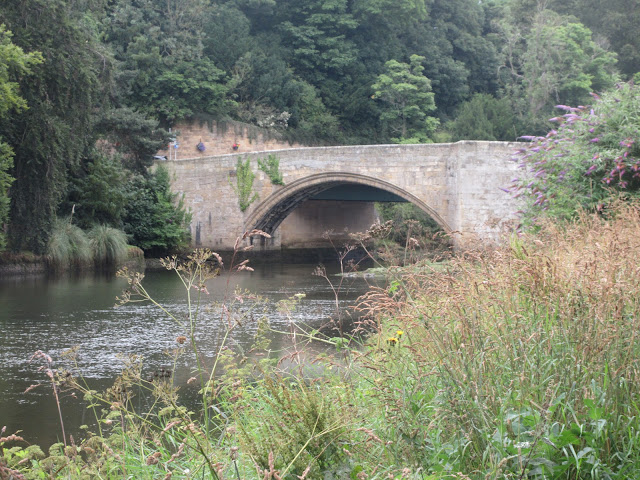 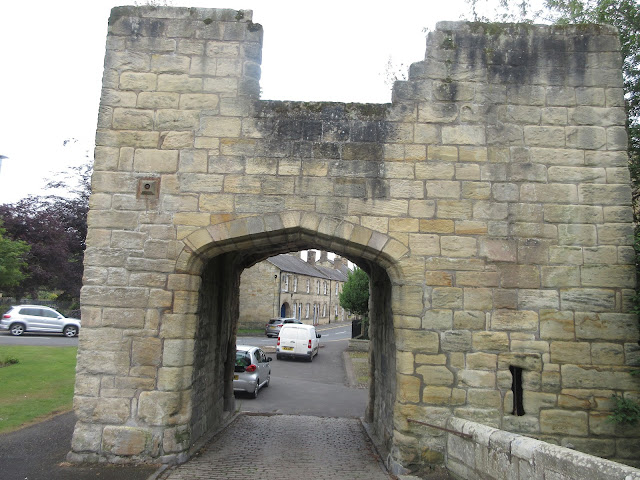 The old bridge, pedestrians only. The road bed is made of stone setts.  (Technical note: setts are rectangular, cobbles are large pebbles) The gate is vertical really.
Over the bridge we crossed the road and headed for the beach, leaving the road to follow a footpath through fields. Much nicer than walking the tarmac. The route passes two more car parks, with toilets, before heading down to the dunes. rather than go straight to the beach we turned right and followed the footpath on the north side of the Coquet towards the jetty. 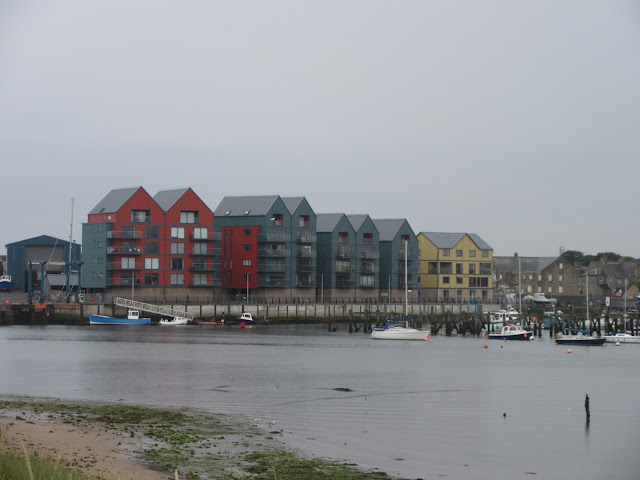 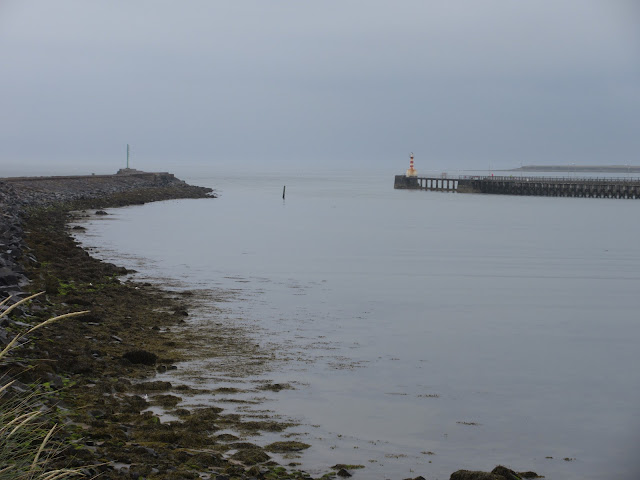 Amble from across the Coquet.
At the jetty we walked through the gap in the dunes and headed north on the beach. The harder sand is near the water's edge. Considering it was overcast there were still a lot of families doing traditional sea side things. Building sand castles, playing with a frisbee, walking their dogs, sending them into the sea. A few surf board riders too.
The only tricky bit are the rocks at Birling Carrs and they can be avoided by climbing up to the caravan park. We crossed the Carrs and continued on the beach until we were opposite Alnmouth. 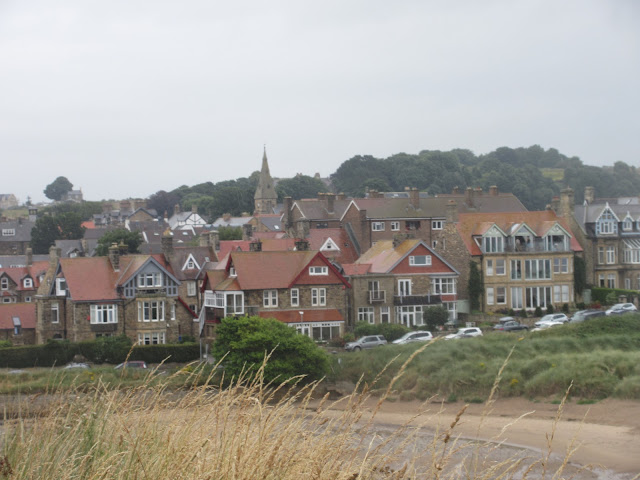 Alnmouth. Pretty village usually recommended in the Times as a good place to visit in Northumberland.
Here we climbed the small hill with a cross on top that marks the area where the original village church of St Waleric stood. (12th C) Cut off and demolished by the great storm of 1806 which also changed the course of the river, nothing remains.
Down the slope from the hill are the ruins of what looks like a Norman chapel but is a mortuary chapel built in 1870.
At this point the rain started. The chapel is our usual Herbie Spot so we took what little shelter we could in the building, open to the sky, and shared Titans, almond slices and Snickers and damp sandwiches although I have taken to carrying Ginsters Vegan spicy  vegetable slices not on moral grounds, I like them. 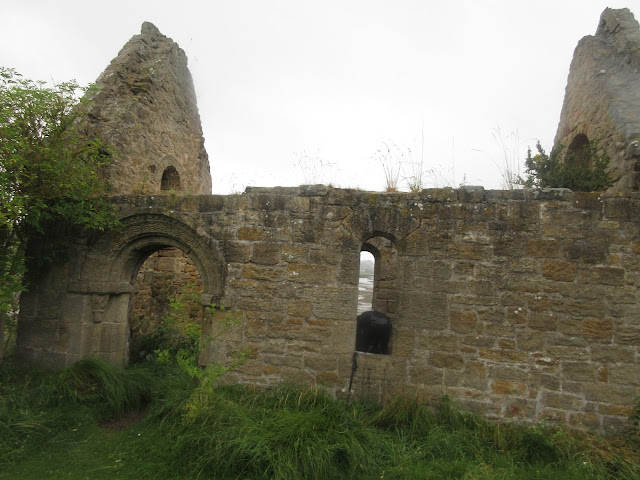 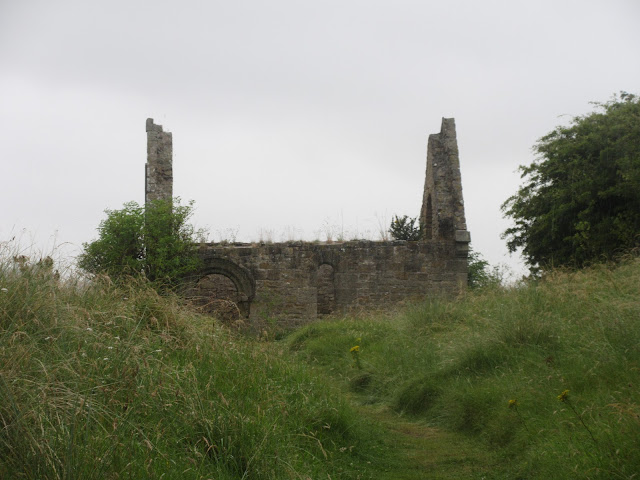 The chapel, an open air Herbie.
The rain was getting heavier so we didn't hang about, packed sandwich boxes away and headed for the Northumberland Coast Path/St Oswald's Way. This path goes through the dunes, passing the Alnmouth Guano shed which stood on the river bank before 1806 and is now a ruin in a field. It was used to store guano, used as fertilizer and was built away from the village because of the smell! 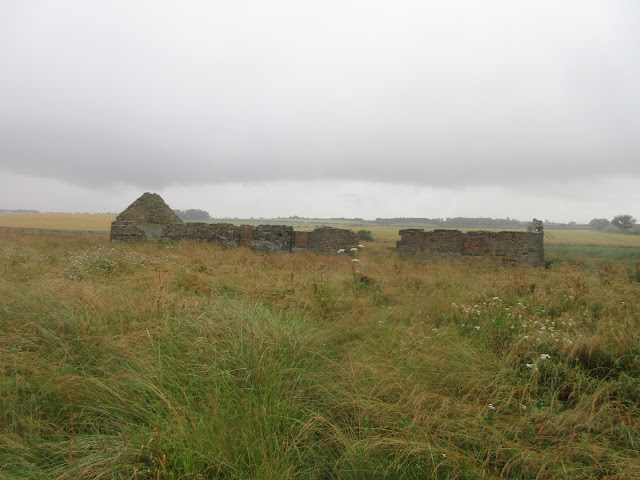 The Alnmouth guano shed.
By now it was raining heavily, I wrapped the camera and put it in my rucksack so no more pictures.
The path goes through the caravan park and then alongside Warkworth golf course. At one point it dips below a footbridge built to take golfers from one green to the next . The path then follows the edge of the course back to the track down from the village. Back across the bridge and to the cars. We were, as my mother would have said "Wet through to our knickers." We dried off as best we could, for once I had a spare shirt but not spare trousers. Too wet to go to the pub we went home. Earliest finish for many a year. 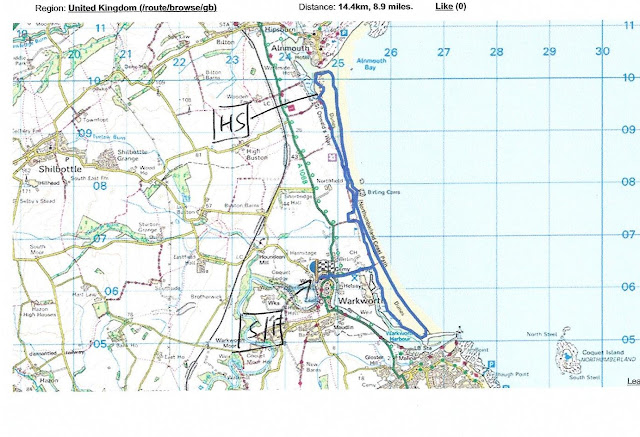 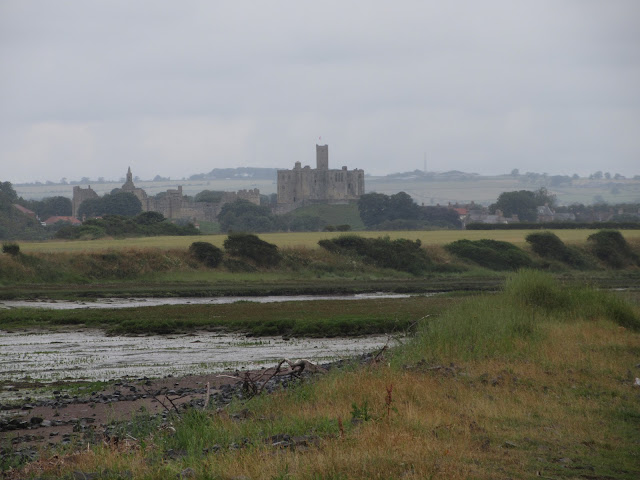