A walk in Weardale from Westgate to Cowshill and back. (Durham) July 23rd.

There are six of us out today, walking in Weardale for the first time for a long time because of........

Brian, Margaret, Harry and John H in one car; Dave and I in another. The walk starts from Westgate, a village in Weardale; A69 west, A68 south, minor road through Edmondbyers to Stanhope, turn right and a few miles later turn left at the Westgate pub, The hare and Hounds, cross the bridge and on the left is a car park, community hall and playground. Park for free too, a bonus.

The walk is covered by OS OL 31 North Pennines, useful too. 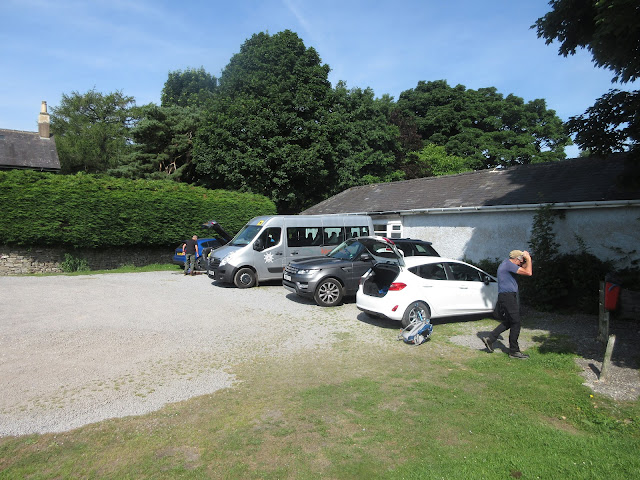 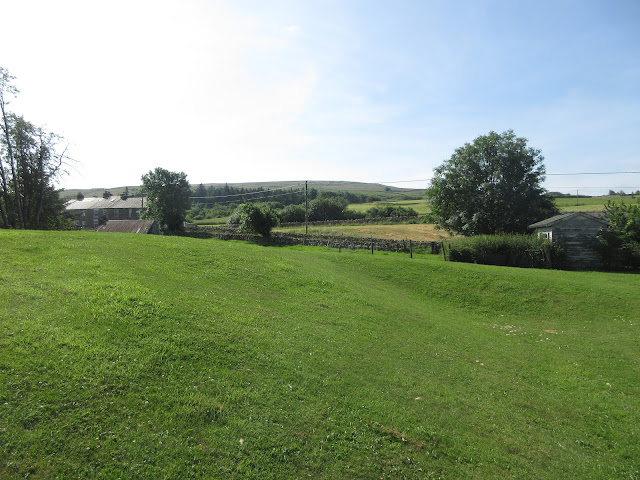 We left the car park, lightly dressed as it was yet another hot English summer day, but all carrying extra water as sensible gadgies do, and went back across the bridge to the village street, crossed the road and headed up the hill past the old school. Turning left we joined the path through the remains of the the old Slitt lead mine. 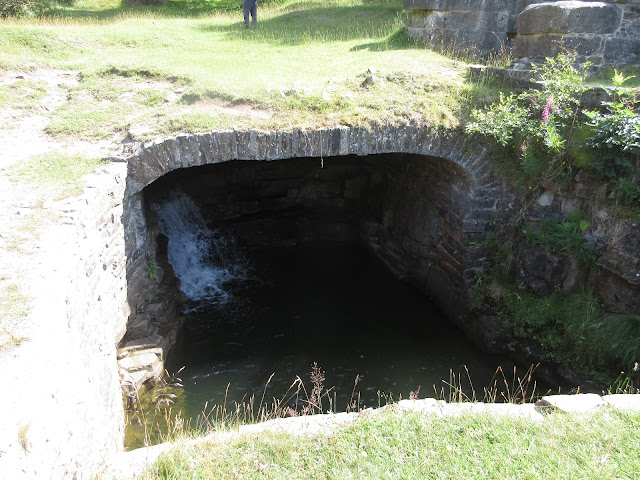 Apparently built to deivert the stream and give a larger working area. 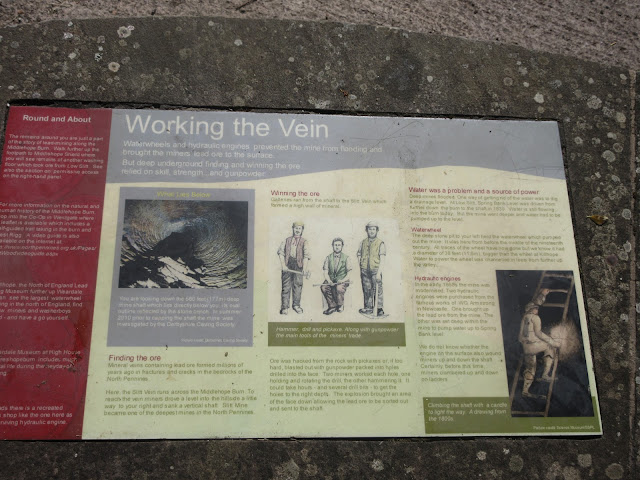 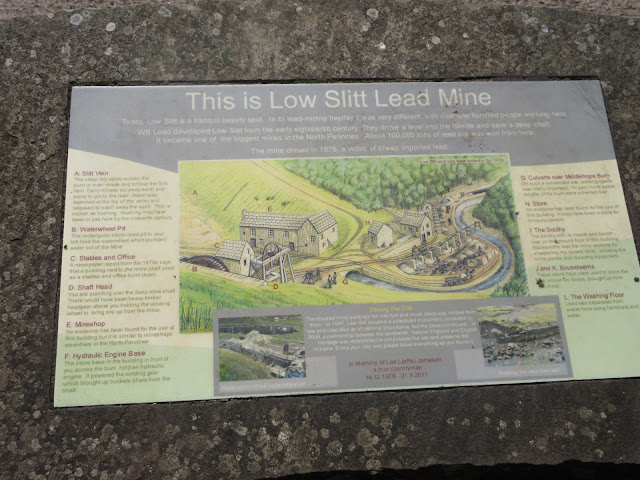 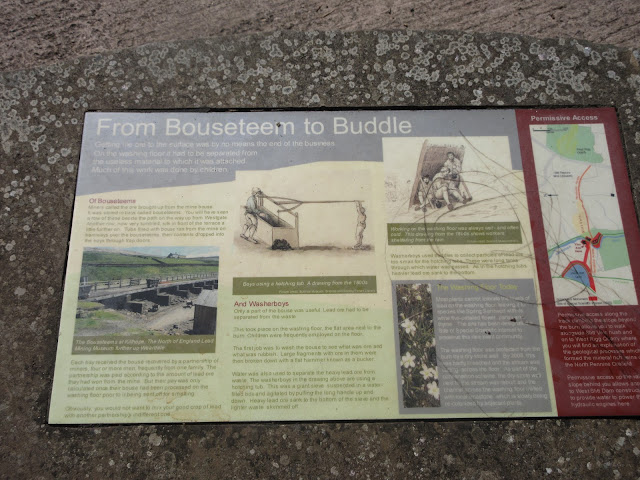 Lots of piles of stones to admire, including the remains of the water wheel pit, engine bed and others.

beyond the mine the footpath followed the Middlehope Burn, climbing slowly, then across fields before turning sharp left onto a rough track. At the junction with Seeingsike Road (a track) we walked on a deeply rutted track which also had some deep puddles until we reached the ruins of Middlehope Old Mine, which had been a source of flour- spar. 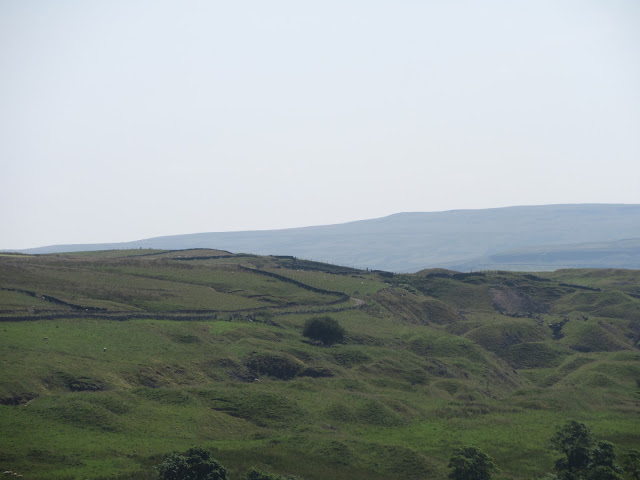 Not drumlins but waste heaps 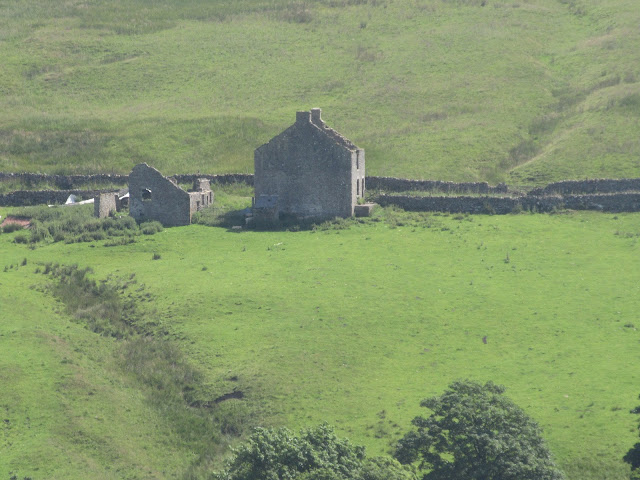 From the junction we headed west and uphill too  along the road until we left the tarmac and went into the welcome shade of a woodland path.

After a short walk in the shade we were out on the moors again, crossing Rase Head (586 metres or 1922 feet in Imperial units)

Eventually we began the descent to the village of Cowshill which had once also been a lead mining area. It doesn't get a mention in Pevsner's Durham buildings  an insignificant place or an omission?

As we reached the village we spotted a couple of benches which made a fine Herbie Spot. 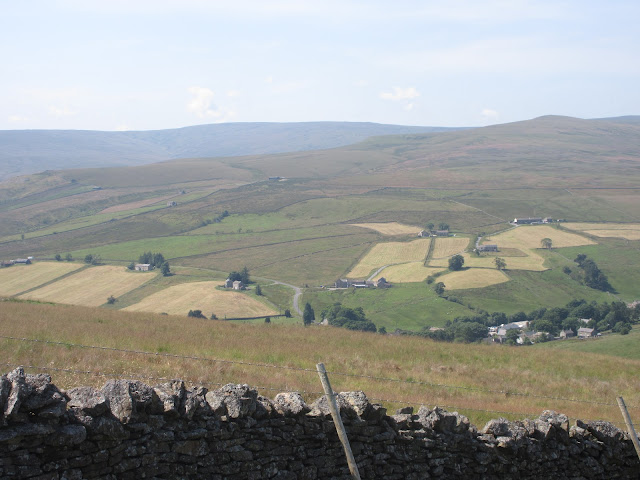 The hay has been cut and dried. 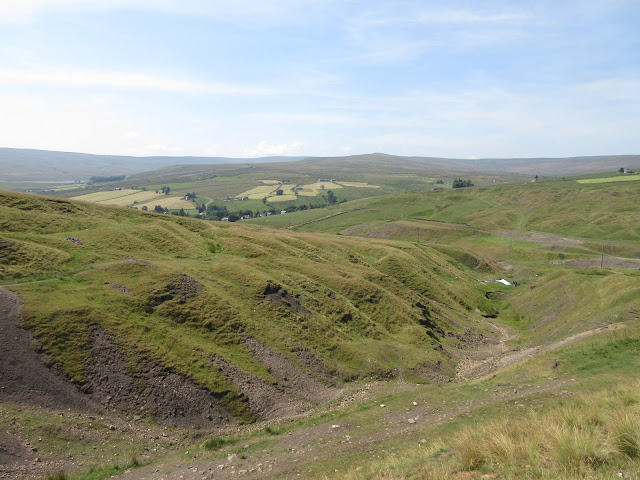 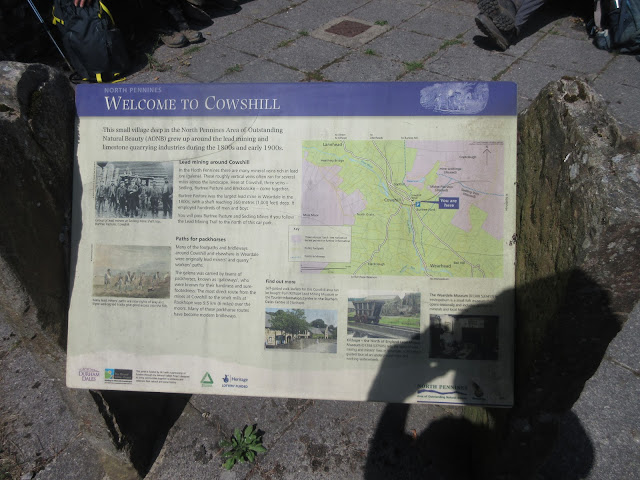 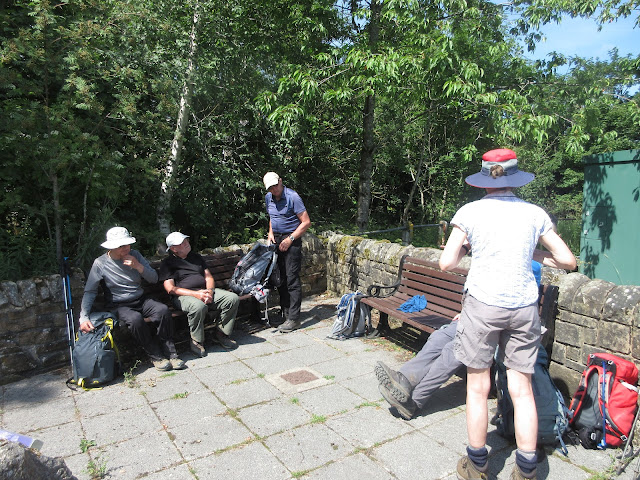 Herbie time. Blackcurrent and apple pies, almond slices, savoury tarts and flapjacks from Mrs A. Dave is carefully packing his stuff a way and checking nothing has been left. 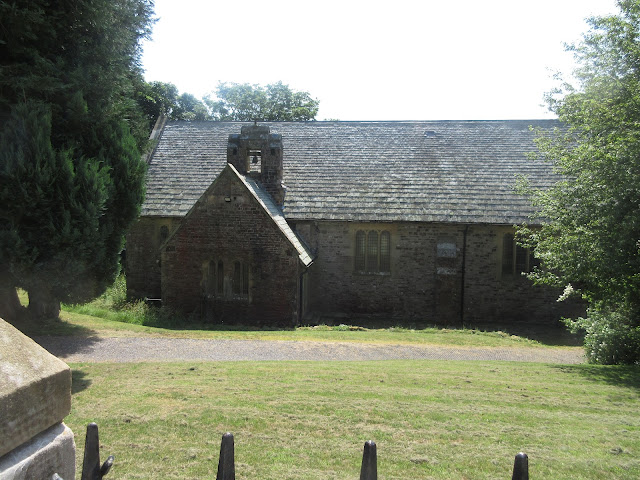 After the feast we crossed the road at the Cowshill Hotel, walked past the village church (St. Thomas), turned left, crossed the bridge and found the finger post for the Weardale Way. The path, which is at times part of the Minerals Way walk too, follows the River Wear.  At the first village we came too, Wearhead,  the path crosses the river, goes through the village then recrosses the river back to the south bank.

At West Blackdene it's back to the north side, easy walking close to the water, passing the village of Ireshopeburn on the far bank, passing St. John's Chapel also on the south bank. At Huntshield Ford the Weardale Way crosses the river by bridge or stepping stones and then remains on the south bank passing close to Daddery Shield before returning to Westgate and the car park. 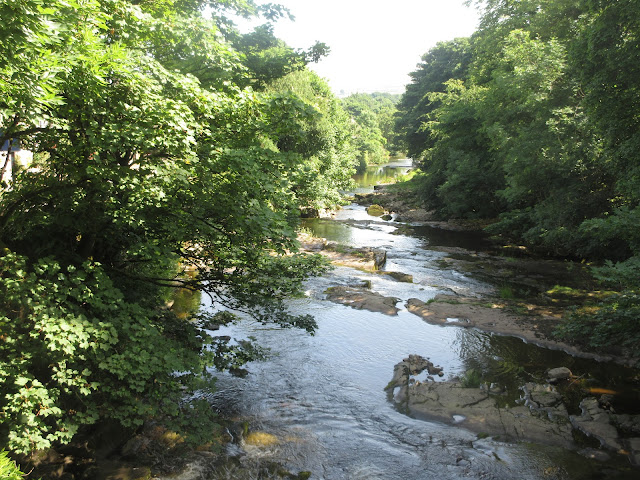 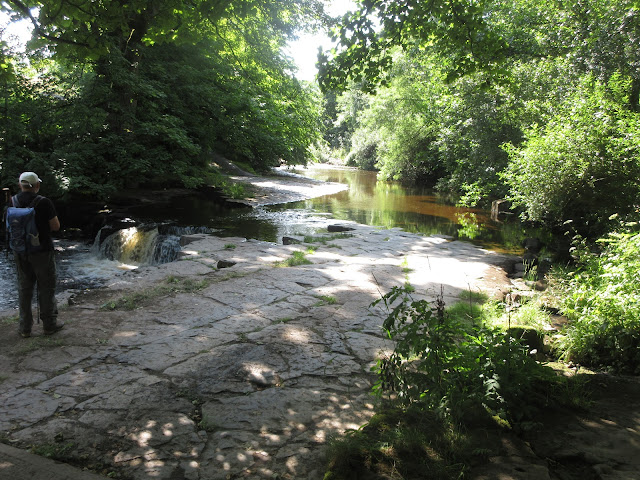 Changed we decided to head for the Duke of Wellingto at Riding Mill. The four drove off. Dave told me he had left some items in a plastic bag at Cowshill so we went back for them. They were not there so he had another look in his rucksack. This will not be forgotten There they were. Later than the others we reached the Duke for a refreshing pint of soda and lime. 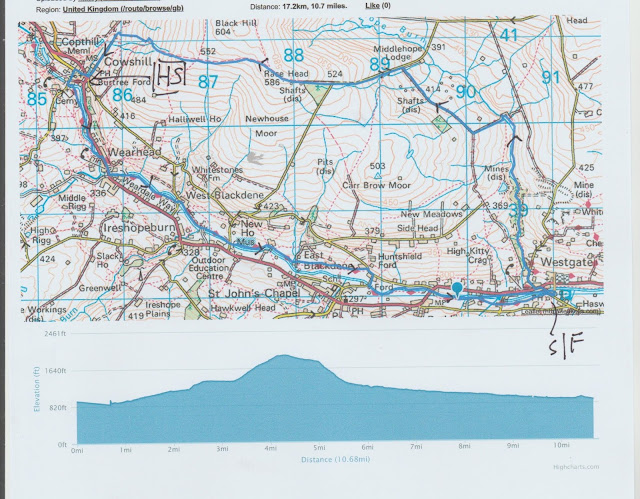 The walk is 10.7 miles, some climbs but mostly easy going, certainly the second half! 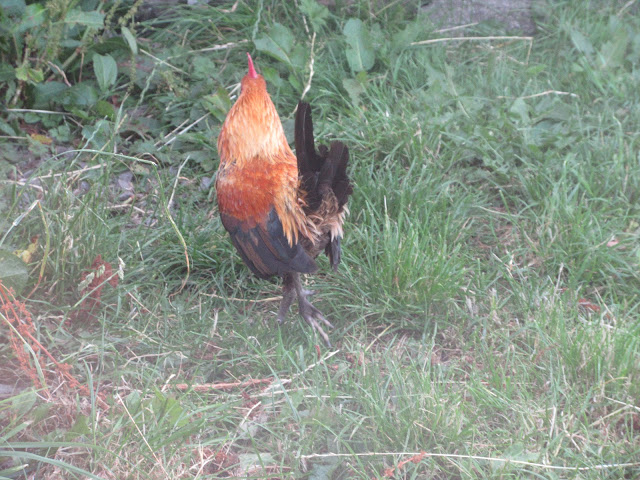 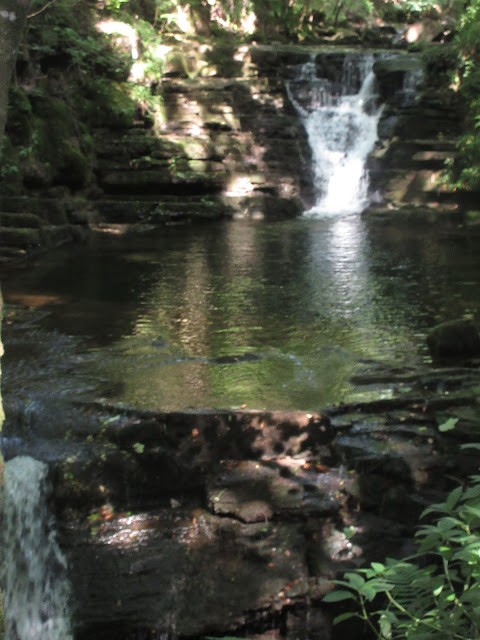 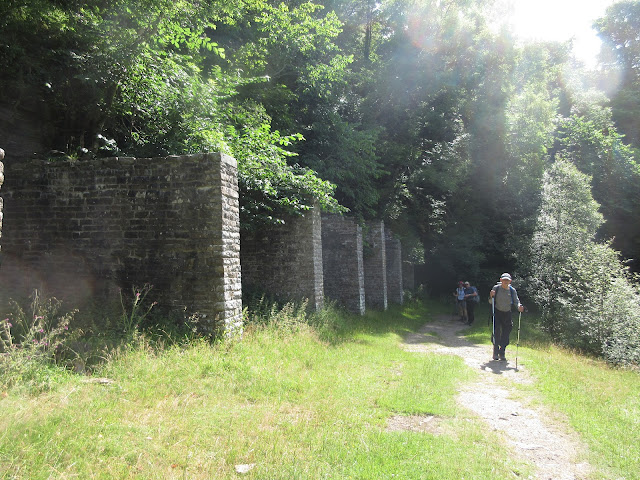 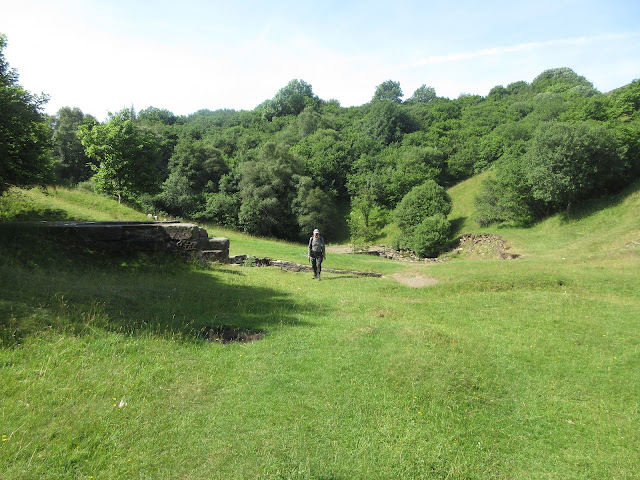 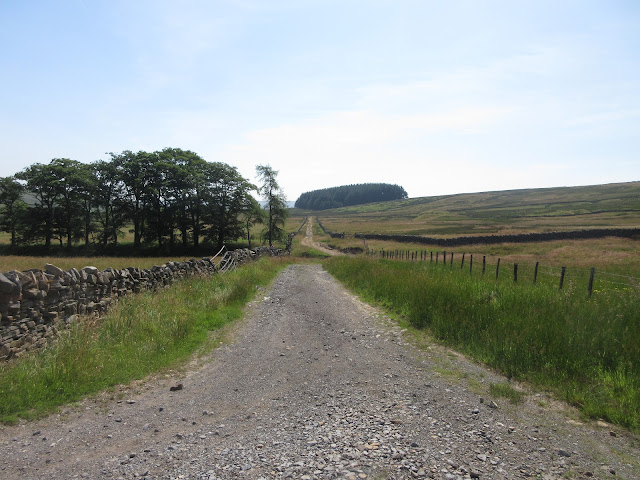 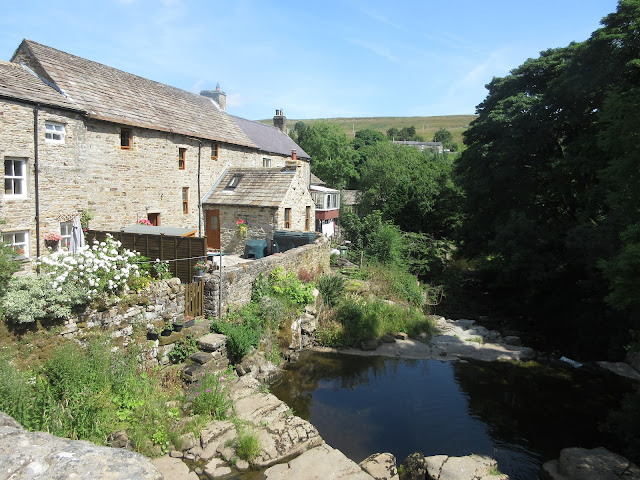 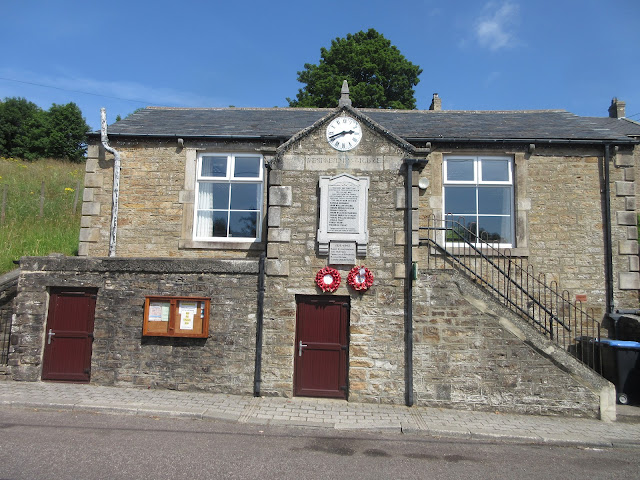