Pits, Pots, Butts and Sparks. North Pennines) October 28th.
Things are beginning to return to Normal and there are six gadgies out today, wandering around the moors near Allenheads. John x 3, Harry, Dave and me.
Allenheads owed its existence to lead but the mines closed at the end of the 19th century. An attempt to reopen one in the next century was shortlived and today this high Pennine village relies on tourism and some agriculture for its survival. And grouse shooting. And you can ski, sometimes.
From base take the A69 west to just beyond Hexham, the A686 south and the B6295 through Allendale to Allenheads itself. There is proper Yorkshire car parking, a pub, a café, The Hemmel, and a heritage centre which has an old hydraulic pump built by Armstongs on display. It is one of several built at his Elswick works for the mines in the area.
The walk is covered on two maps, OS OL31 North Pennines and a short section on OS OL 43 Hadrian's Wall. Photo copy cut and paste and laminate if you can stand the scorn. 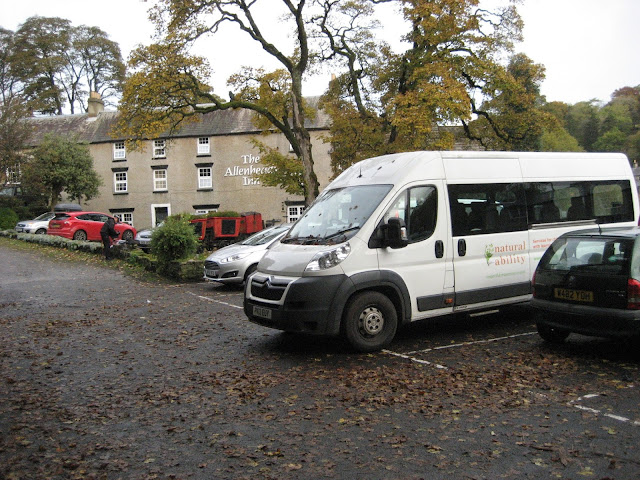 Allenheads car park, pub in the background, built in 1770
We left the village and headed east up the steep road to Rookhope, nothing like a steep hill to start a walk but we did cut a corner by following a boggy path. Near the top we turned left along a good metalled track across Byerhope. Byerhope has everything, quarries disused and active, grouse butts, a house similar to Broadstruther used as a resting place for exhausted grousers and what is marked on the map as a raceground. 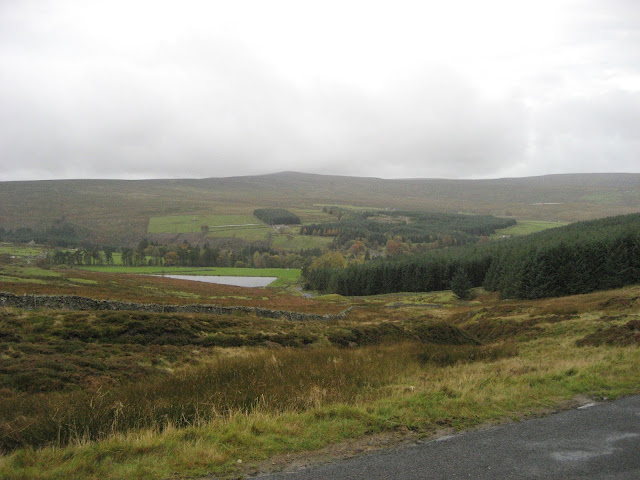 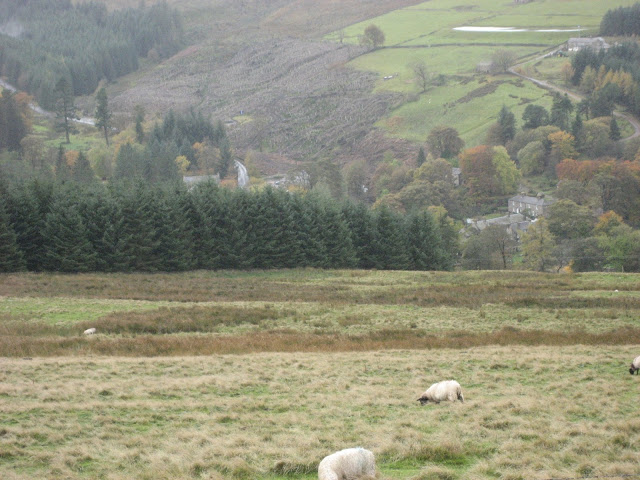 Allenheads, almost hidden in the valley.
Ignoring a track off to the left which goes to Byerhope farm we turned left down a grassy path that took us to Tommy Spark's Fold, not that there was much to see. 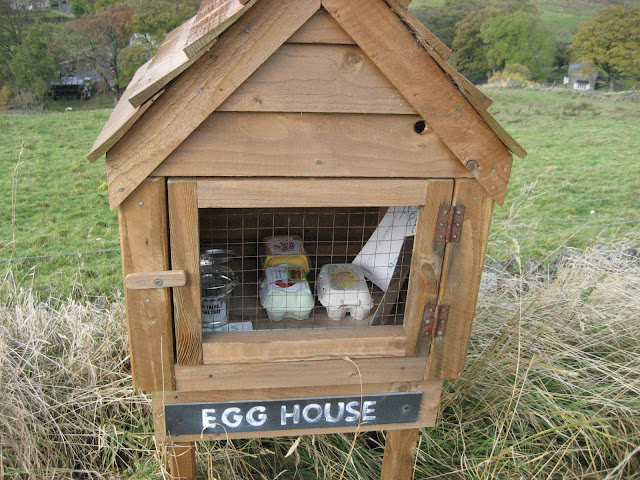 I am the egg house
A track between a short terrace and the egghouse led us down to ford across the River East Allen. The river was well over boot depth but fortunately there was a footbridge too. 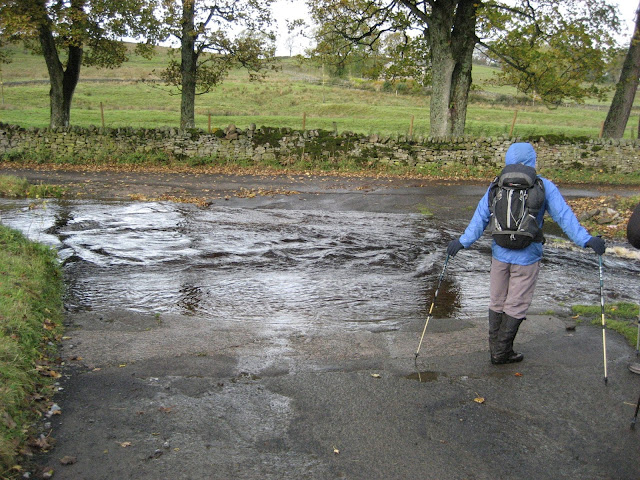 Plastic bags or wellies needed on the East Allen 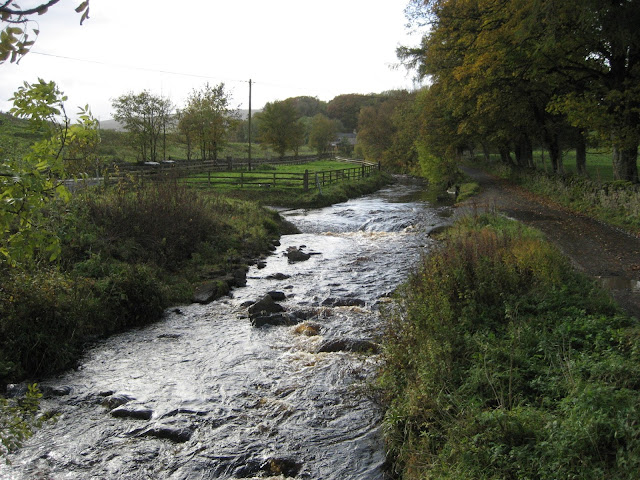 Considering how dry it has been recently the river  is quite high. The jacket would explain that clouds are forced high by the hills, cooled and fall as rain, illustrating the lesson with hand drawn diagrams.
The path crossed wet fields  before joining a path along the river bank. We paused at St Peter's Church, described in Pevsner as a "disused preaching box from 1825". he doesn't mention the large cemetery. 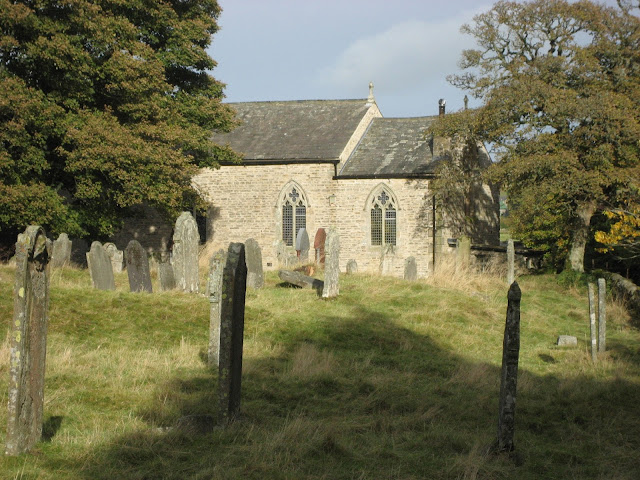 The unused preaching box of 1825 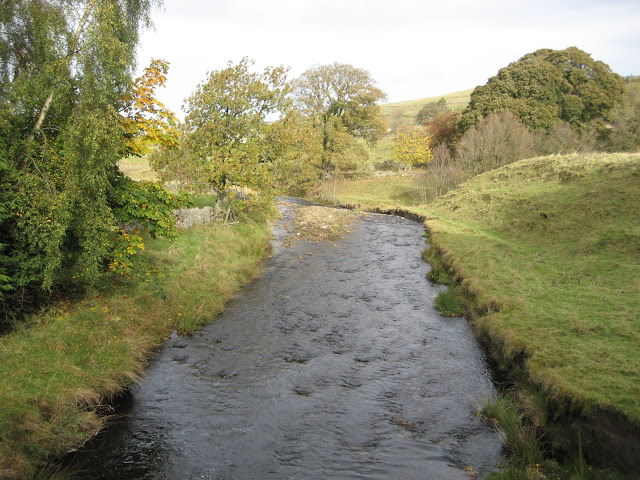 and the East Allen at St. Peter's
We crossed the river, by bridge, and waled across fields to Spartylea, turning right at the Primitive Methodist Chapel, taking a short walk uphill and then crossing several fields to Tedham where we crossed the road and rejoined the river. 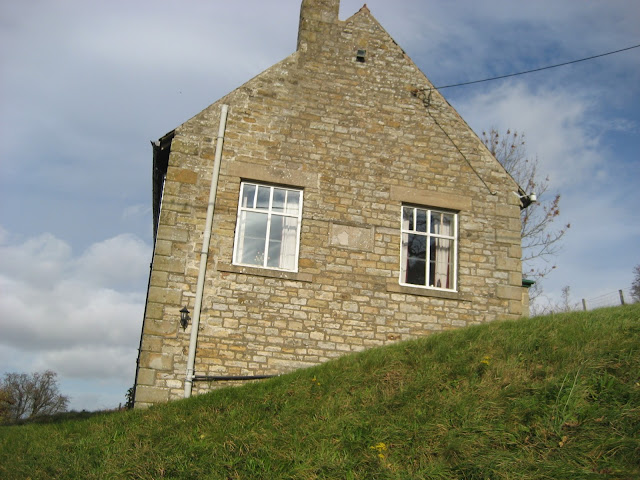 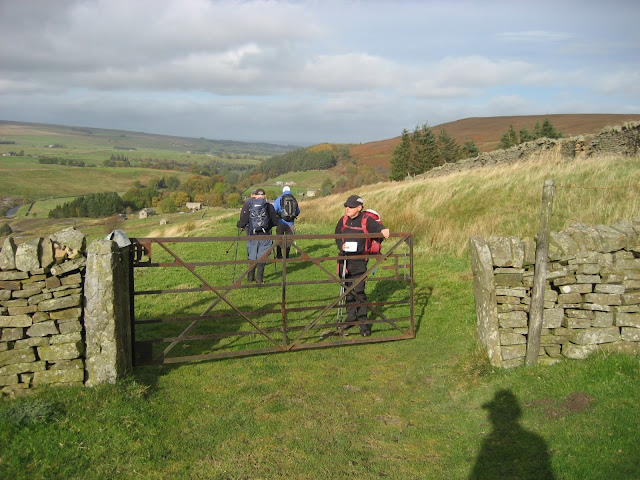 On the path to Tedham 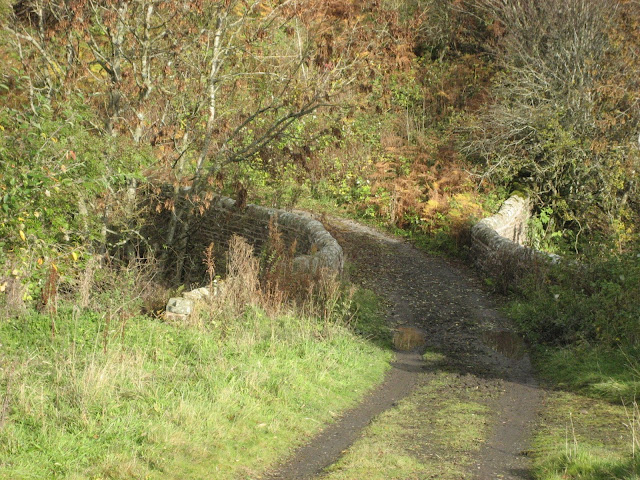 Beyond Tedham.
The footpath wandered through Sipton plantation and we called a Herbie Spot at a sunny spot on the river bank. Obviously a popular picnic spot, the remains of several camp fires and strangely, a Stella Artois glass. 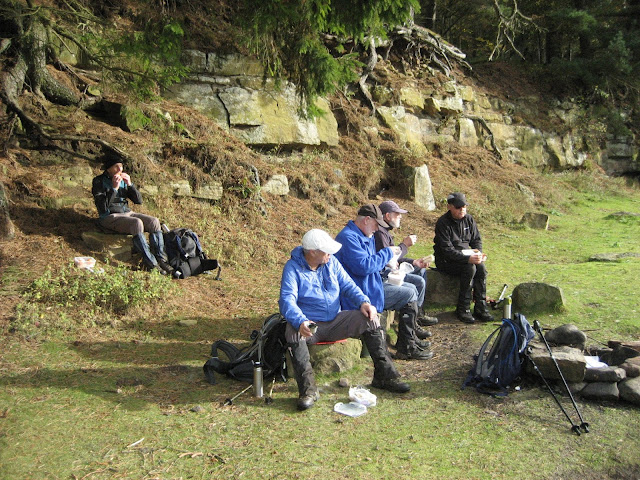 Herbie time on the East Allen. Those of us who contribute shared chocolate slices, chocolate covered flapjacks. Fruesli bars and chocolate and ginger flapjacks from www.jesmondcakecompany.com
Here we are, October is almost over and we sit in the sun.
Lunch over we walked on to the end of the plantation, crossed the river by the footbridge, (another ford but boot covering water) and turned south west on the Black Way, a good metalled track, which is shared at one point with the Isaac Tea Trail. (Isaac rode the northern hills selling tea, there are several walks following his trail.)
The Black Way climbs slowly across the moors, at a junction after the best part of two miles we turned left and headed downhill to Swinhope, From here we crossed fields ,crossed a road and crossed more fields to Hammer Shields. More fields and finally we hit the minor road, passing Dirt Pot, once a lead smelter, now an Outdoor Centre, and completed our walk with a fairly long but flat trudge back to Allenheads.
On our way home we stopped at The Golden Lion in Allendale which had Timothy Taylor's Landlord Ale on draught and some very nice coffee..
If I started a star system for walks I think this would deserve a five star rating. It has everything that the hills in northern England has to offer. Moorlands above valleys dotted with small farms, grand views, woodlands, fields and streams. Wonderful. 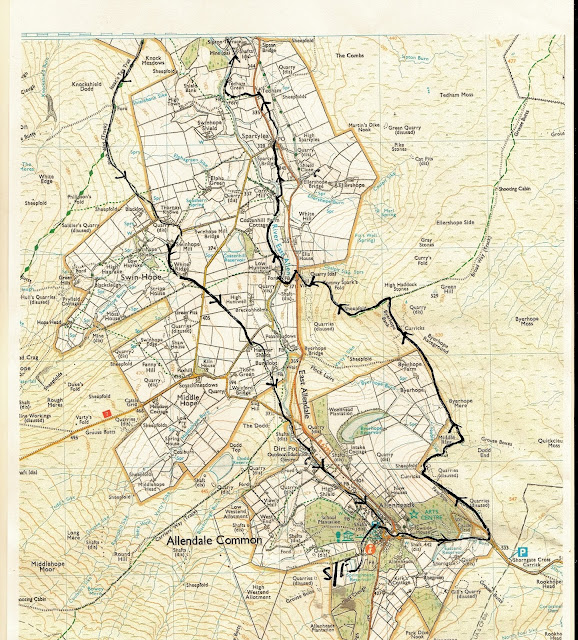 ALLENHEADS
Allenheads is well worth a visit. It is a pretty northern village and there is a considerable amount of evidence of its industrial past. There is a Heritage Centre, some of the shafts (pits) close to the village are well marked(and covered) and there are several information boards telling the story of lead mining. Some of the old buildings remain although dilapidated. And it is shelterd deep in the valley. We shall return. 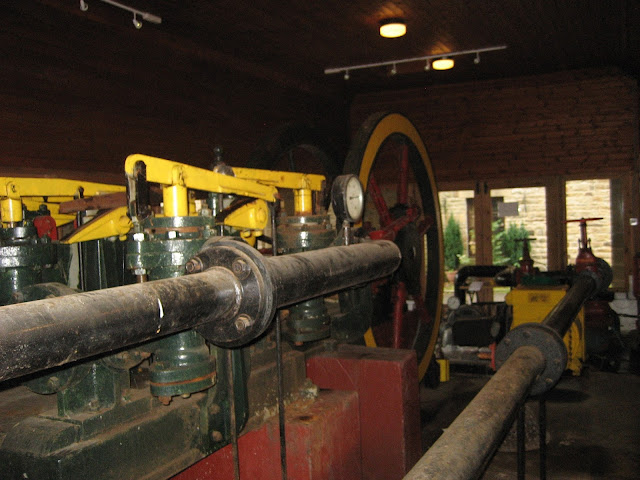 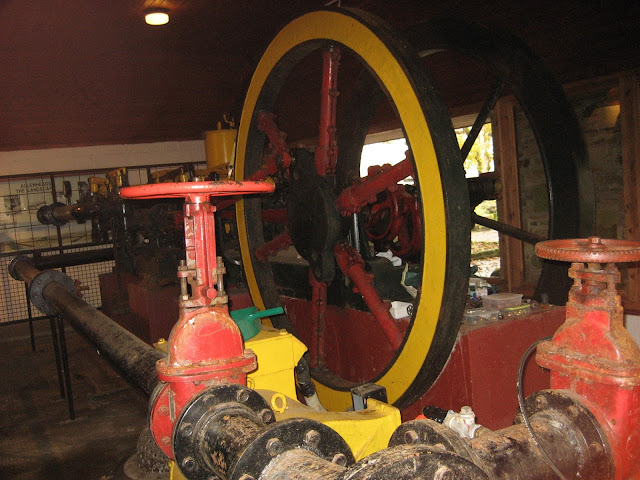 Armstrongs Hydraulic engine. Powered by water from reservoirs above the village and used to drive machinery 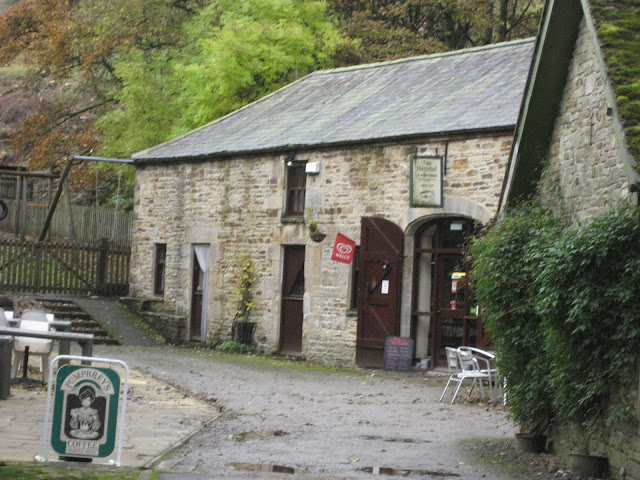 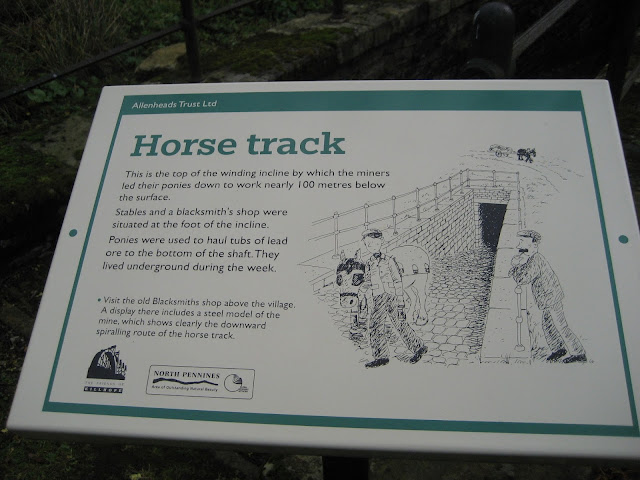 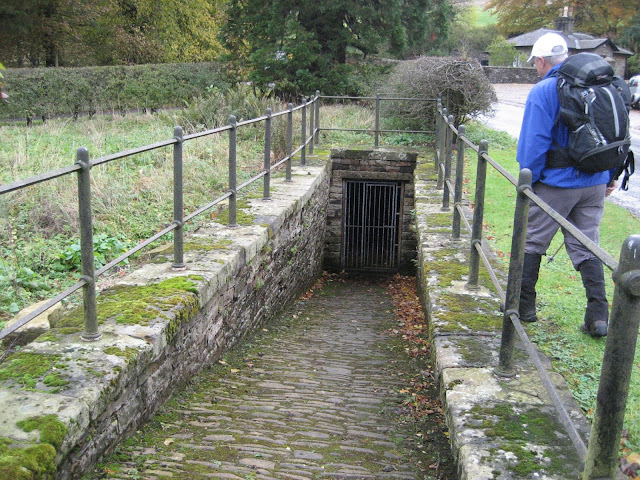 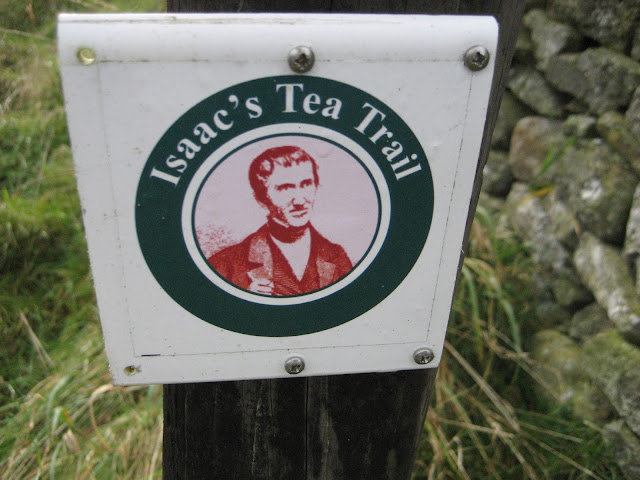 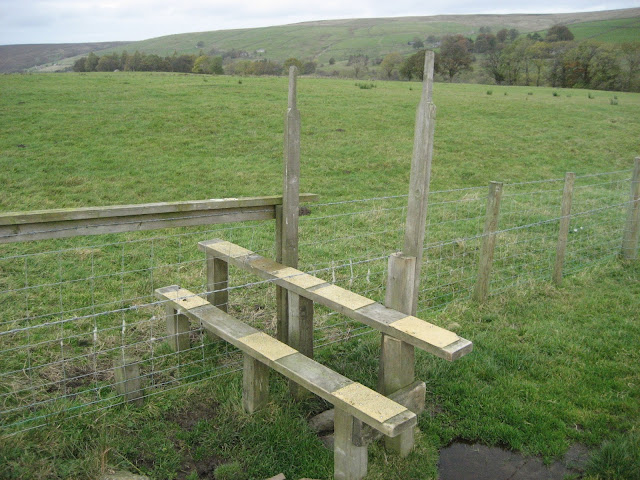 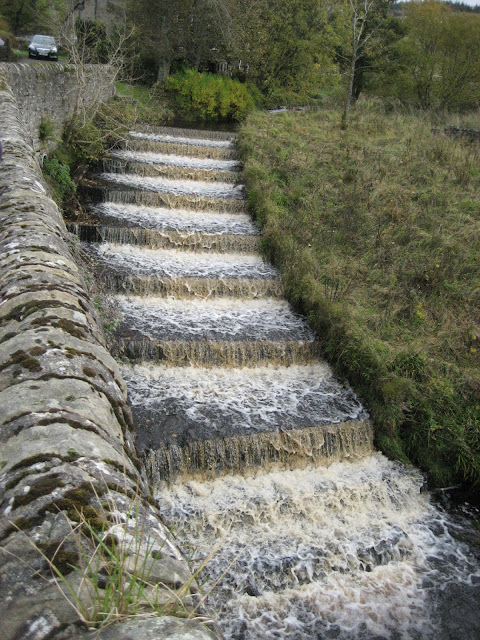 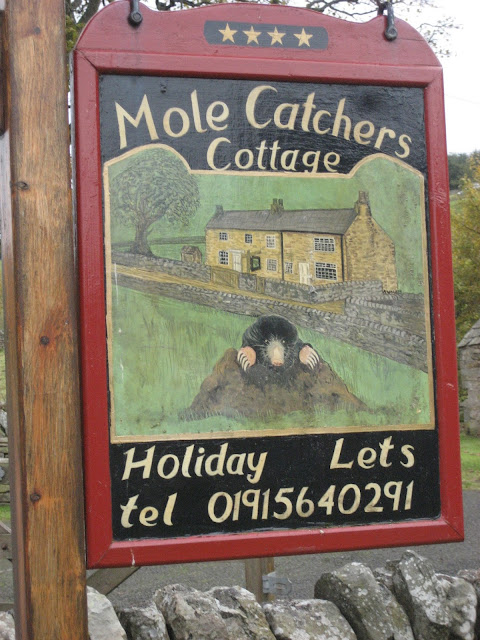 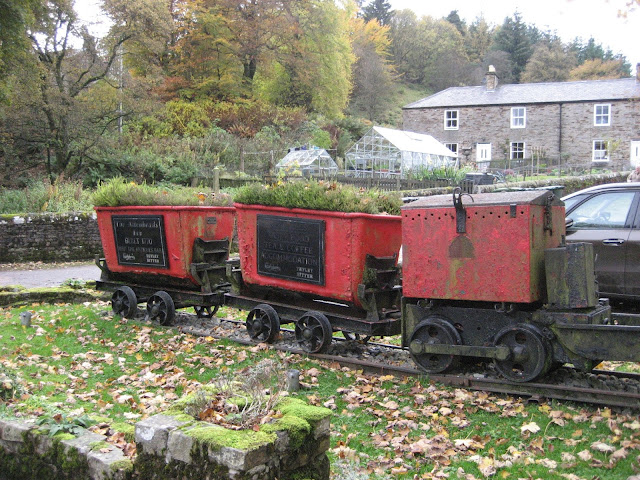 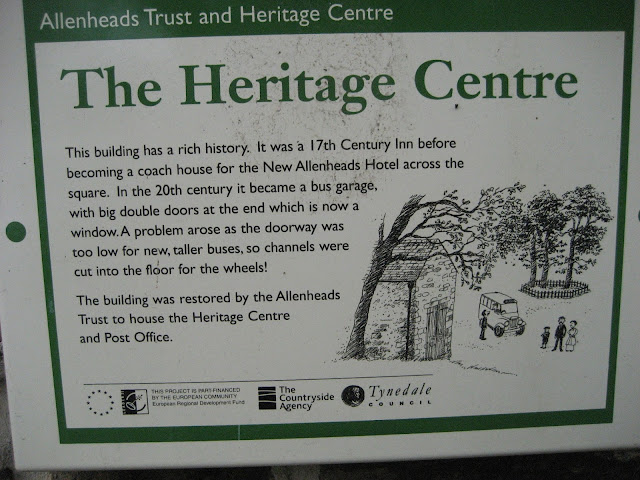 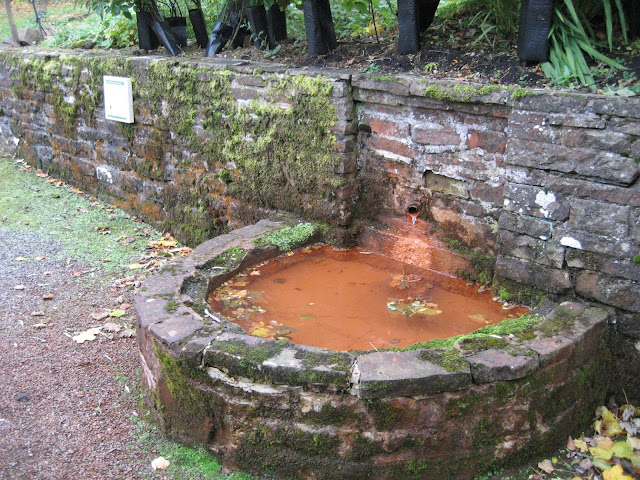 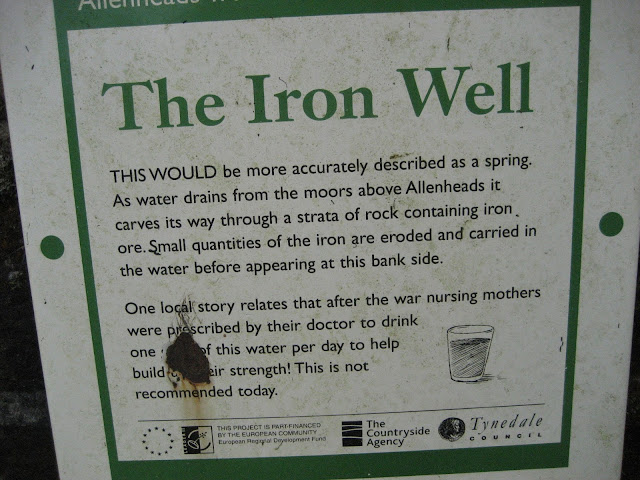