John Martin rides the trail again..... October 21.(Northumberland)
At this rate there will be nobody left. Holidays and the dreaded EK virus strike again and we are reduced to three gadgies, Brian, John Ha and me following the well loved John Martin trail from Haydon Bridge.
John Martin was born in 1789 in Haydon Bridge. His vast paintings, often with a religious theme, have landscapes with tiny figures, such as "The destruction of Sodom and Gomorrah" and "The Bard" which Harry and I saw in the Laing Gallery, Newcastle last Tuesday. Proper paintings, telling a story not a pile of bricks or unmade bed.
On this walk we pass several sites that possibly inspired him. There is pamphlet and route map available in several Haydon Bridge shops but if you are an OS fan the walk is on OS Explorer OL 43 Hadrian's Wall, not that it goes near the wall .which is a shame as I like the wall
Haydon Bridge is west of Newcastle on the A69, turn right towards the town but turn left just before the bridge across the Tyne. Go past the Anchor Hotel and turn left by the Haydonian Club and park just beyond the Shaftoe Trust Primary School. The car park is at NY845641. And a nice one it is too. 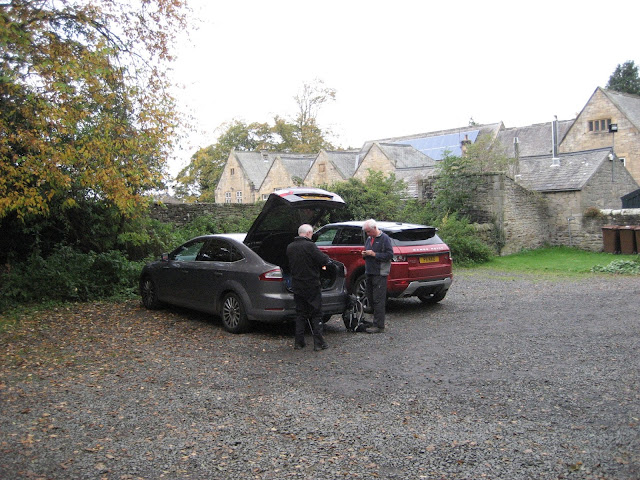 Free Parking, Shaftoe Trust Primary School behind
Walk down past the school, cross the road and follow the very minor road past some houses to East Land End where John Martin was born. There is a plaque on the end of the tiny cottages to commemorate his arrival but far more interesting is the hand painted message on the tank. 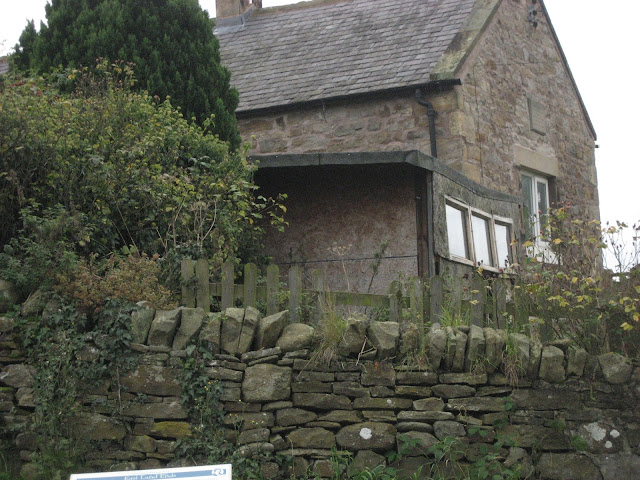 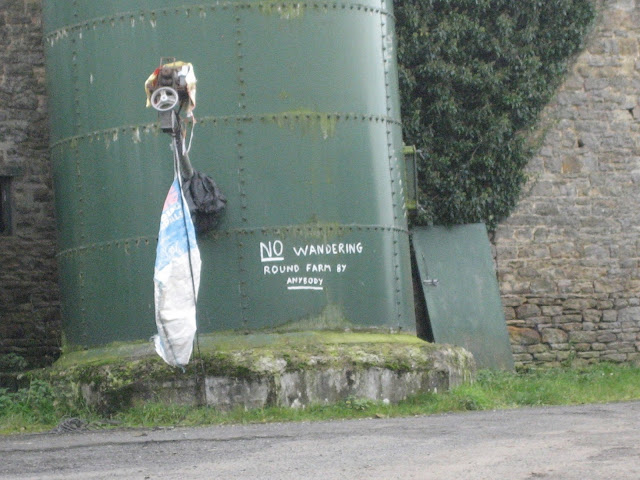 Perhaps he got fed up of John Martin fans, or maybe he's just a miserable farmer. On the other hand I wouldn't want people wandering round my yard either.
Further on take the right hand track to Lees Farm where you will get a warm welcome from a three legged collie who hops around the yard whilst his mates are locked in their large kennels. Follow the footpath past a couple of cottages and through the gate which has a John Martin Trail marker. Actually the whole trail is well marked and at times it shares paths with a National Trust way. 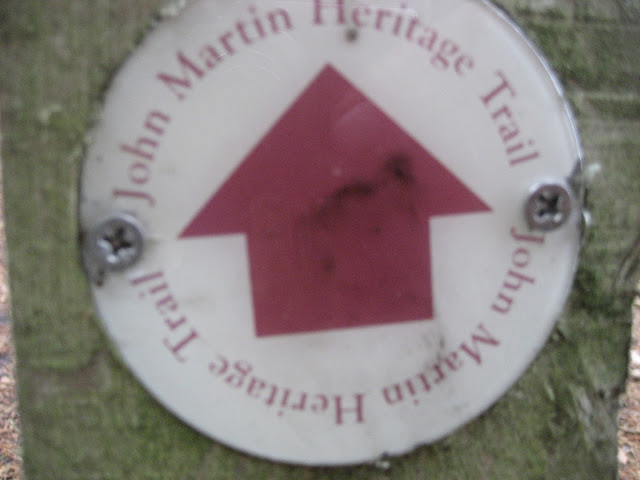 Watch out for posts with markers.
Cross three fields, heading for a corner of a small wood next to a road. Take the road downhill and watch out for the National Trust badge on the left hand side that is on a footpath to Moralee Wood and Tarn. The tarn is shrinking, the Trust needs to clear it of reeds and rushes, you could find Moses in there. It has acquired a charcoal burner since we were last here. 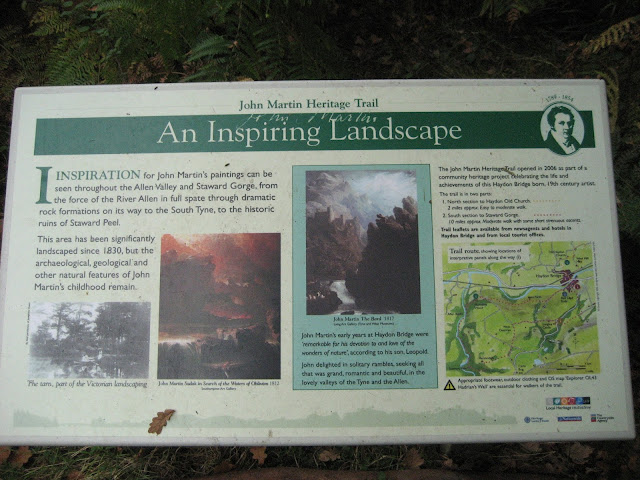 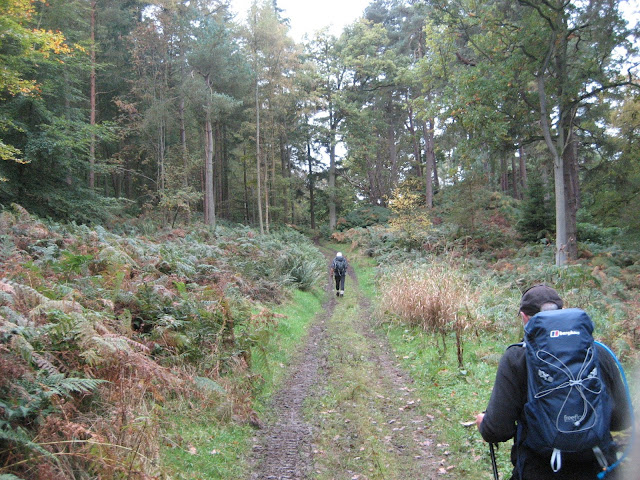 Human interest for Sue of Forest Hall, nice to meet you 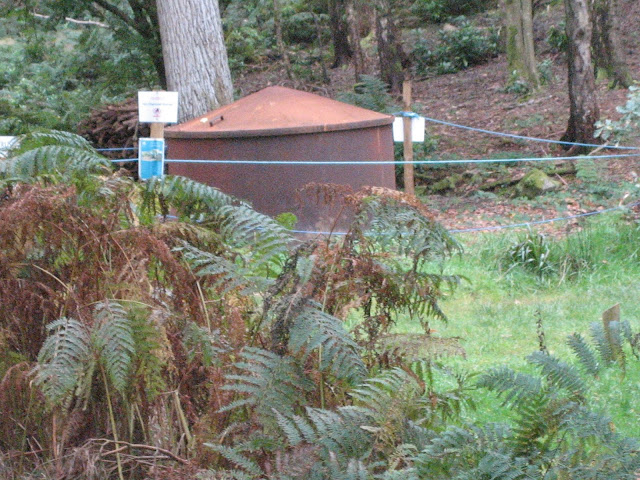 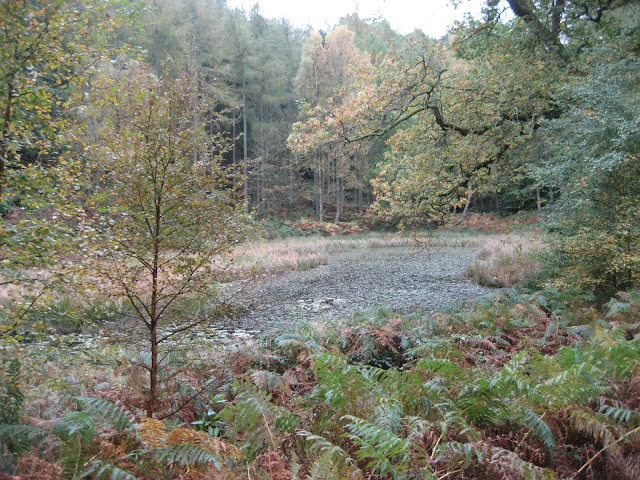 Moralee Tarn, duckless
Follow the footpath as it meanders downhill through the woods to the bank of the River Allen. It is a deep gorge and some of the high rock faces must be the ones that inspired John.
Take the path alongside the river, at one point it crosses a couple of fields before arriving at Plankey Mill. 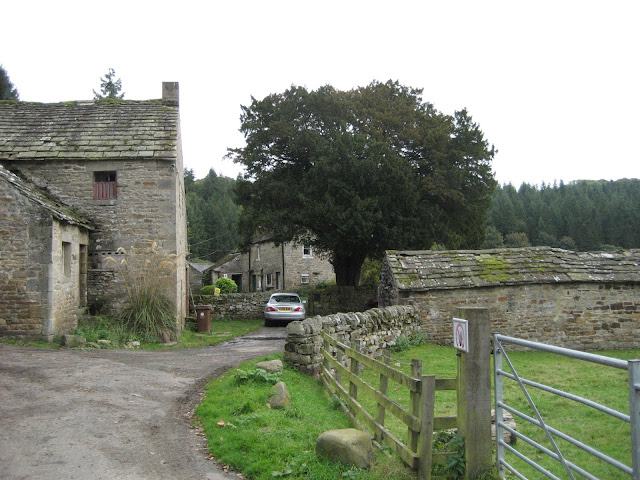 The farm at Plankey Mill. Plankey Mill was once also known as Nakedale which possibly has something to do with springtime floods and forming of an island in the river. Nobody seems to know where Plankey comes from. It was a corn mill once upon a time. Now it has a few picnic tables and makes an ideal Herbie Spot.
Only three of us but we shared lemon flavoured biscuits, mince pies and a slice of apple flavoured cake topped with cream from Mrs A.
The footpath follows the river bank across a few fields  before entering National Trust land again and climbing to the ruins of Staward Peel, a 13th century stronghold with steep banks on three sides and a narrow path off to the east. 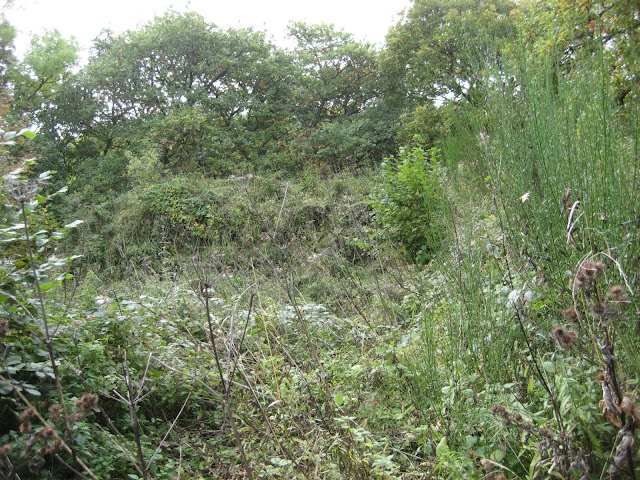 The overgrown walls of Staward Peel 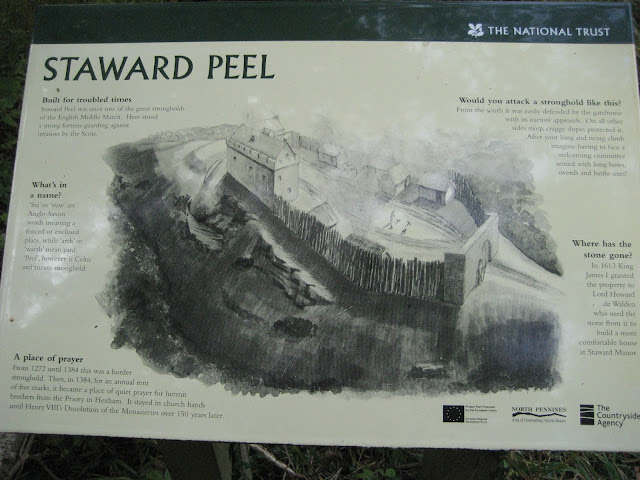 And an artist's impression of the Peel.
Follow the path from the peel east and cross a field keeping an eye out for the gate into the woods at Harsondale. A steep path leads down to the footbridge over the Harsondale Burn and it is followed by a steep path out of the valley. Cross two fields to Harsondale farm and take the farm track to the right.Turn left at the junction with a road and walk on to another road. Go straight across and follow the footpath over to West Deanraw Farm. 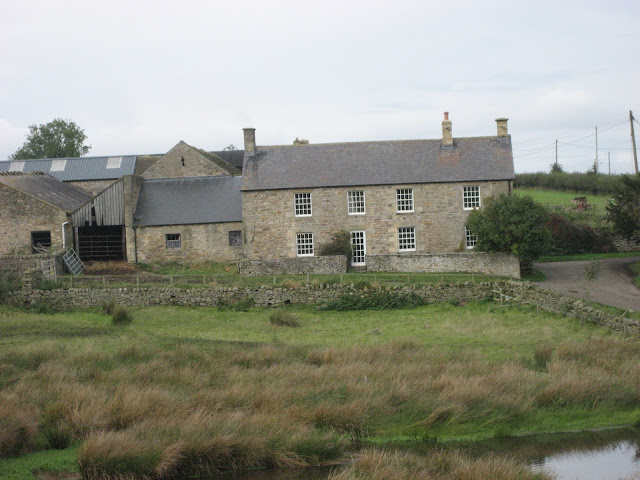 West Deanraw Farm
Follow the farm track to a road junction and turn right along the road. Keep on the road to Castle Farm which had some nice looking belted galloways. 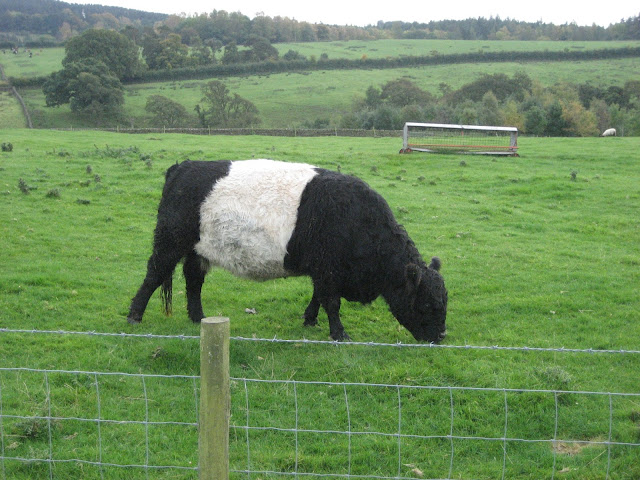 Belted Galloway
At the farm turn right and, just before the entrance to Langley Castle take the track on the left signposted Threepwood. 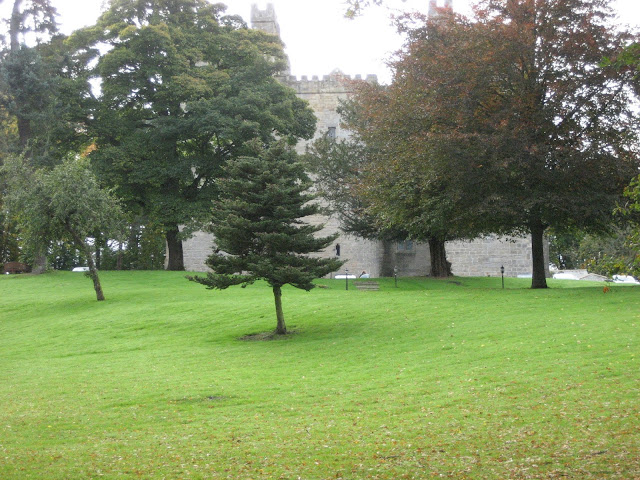 Langley Castle, largely restored and used as hotel, wedding venue.
Follow the track across five fields before taking the footpath down through Langley Burn Woods, emerging on a road. Take the road signposted Haydon Bridge and go under the bypass bridge. Turn right through the play area and the car park is on the left. 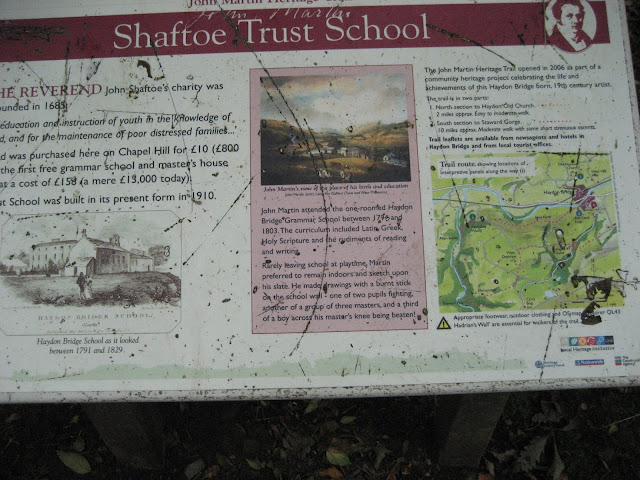 On the way home we stopped at the Boathouse Tavern in Wylam which boasts 14 hand pulled beers on draught. Tyneside Blonde was one of them.

In the absence of Dave there is but one pedometer reading:
33054 steps and 13 miles which is generous again
Outdoor GPS gave a reading of 10.7 miles and Brian said the same, more or less.
This is a good walk, particularly if you like woodlands, not plantations. We did think the trees had not really got their autumn colours yet but it has been a long warm summer. There are several short steep climbs and in places today the ground was muddy but for the scenery, especially in the Allen Valley the effort is worth it. 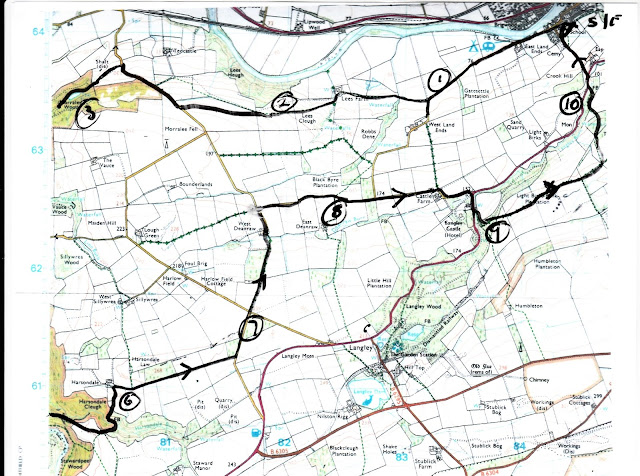 Contains OS data Copyright. Crown copyright and database right 2016
Sorry about the maps but the walk is on the edges of two sides of Hadrian's Wall map. Yes I could have cut and pasted 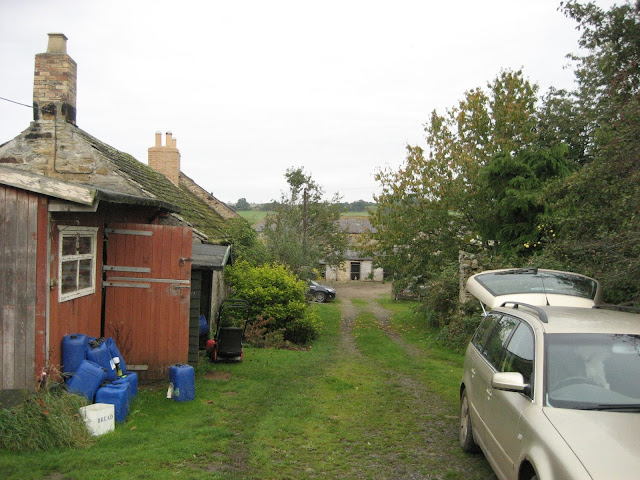 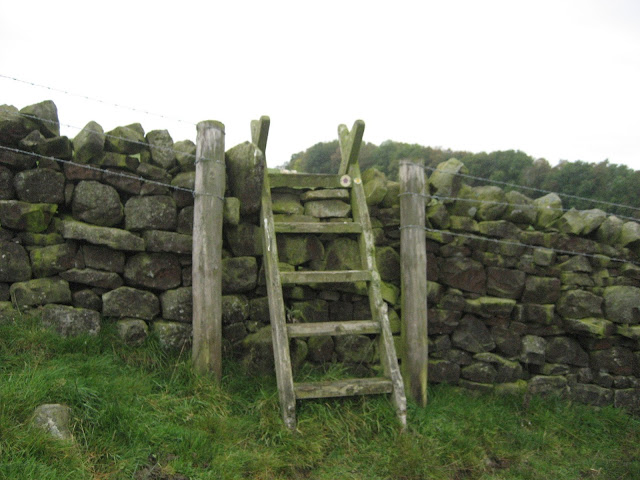 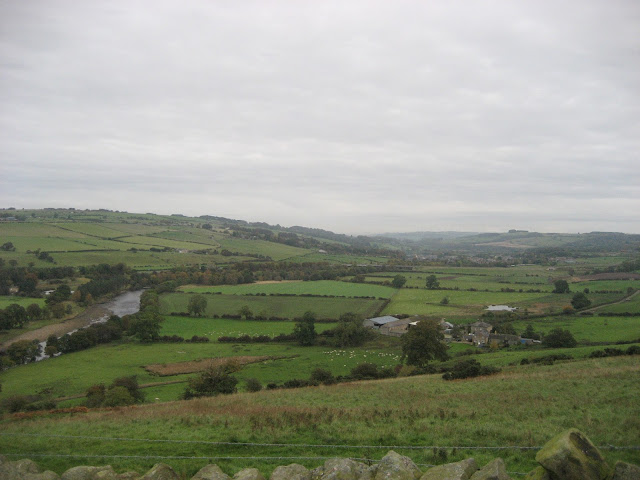 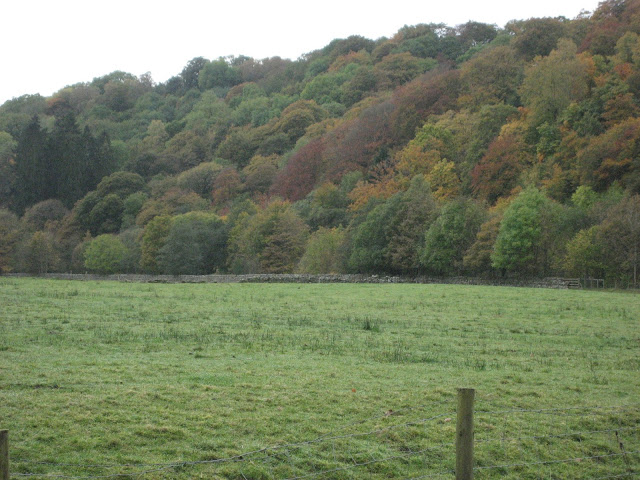 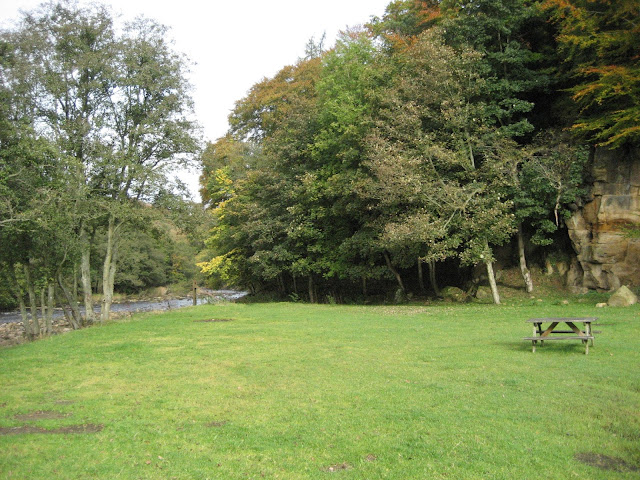 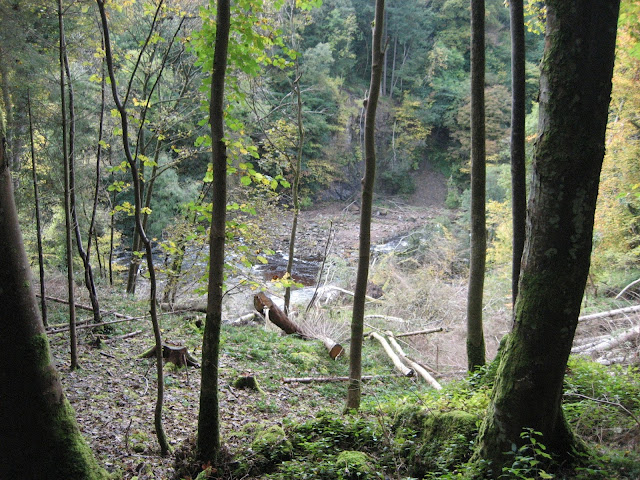 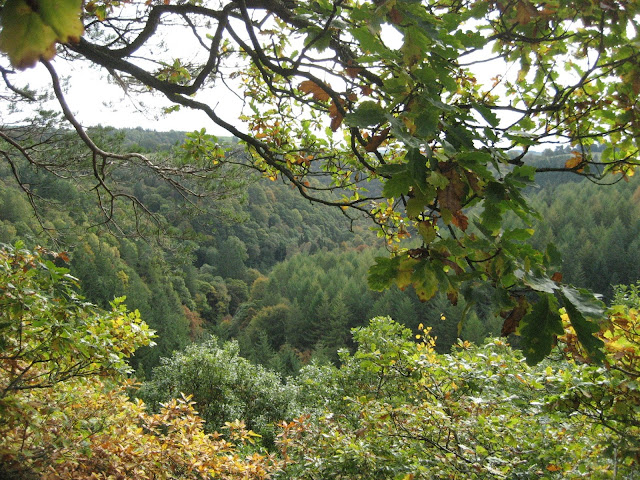 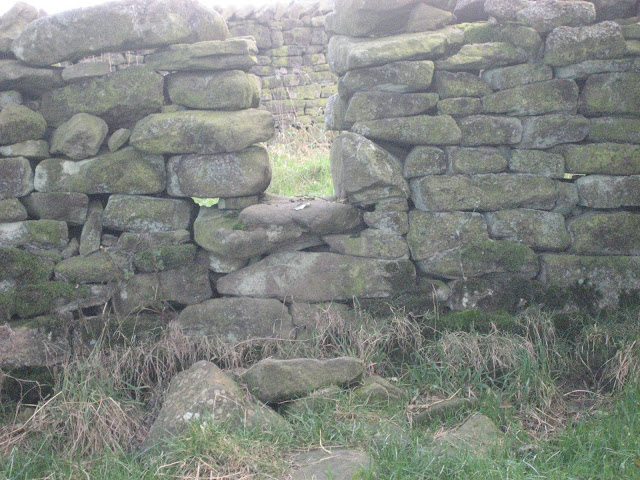 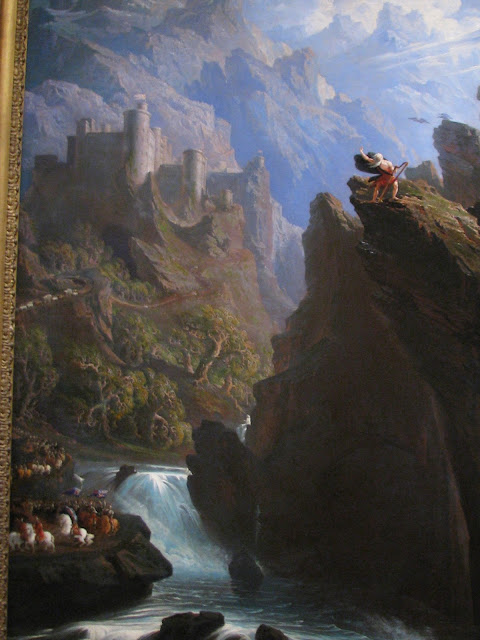 The Bard by John Martin
Posted by The dad at 12:45