The Cook, the Pies and the Topping.......May15th
I have been looking forward to this walk for some time as it involves calling at Petch's Pies in Great Ayton to admire the selection of pastry covered delights. To reach this haven for meat eaters take the A19 south from Tyneside, turn left at the A174,turn right on to the A172 and take a minor road to Great Ayton.  Great Ayton is a pretty village, the birthplace of Captain Cook and quite obviously a well heeled settlement. The star attraction for we gadgies was Petch's Pie Shop; the window display itself was mouth watering, pork pies, steak pies, fruit pies and quiches. I bought a steak pie to take home, probably last me a week.
Six gadgies out today, Ben, Dave, Harry, Brian, John C and me. 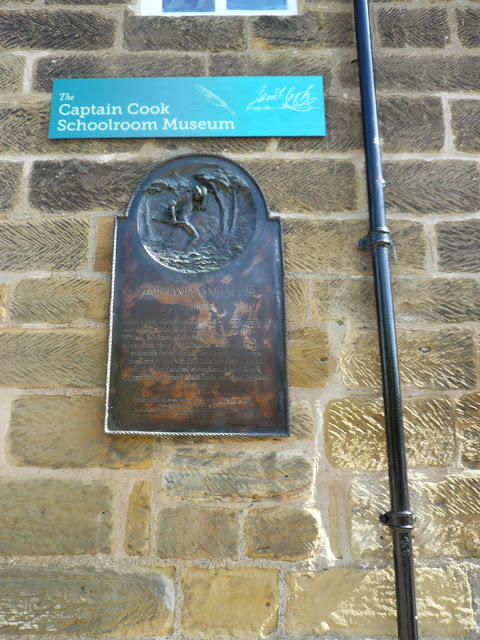 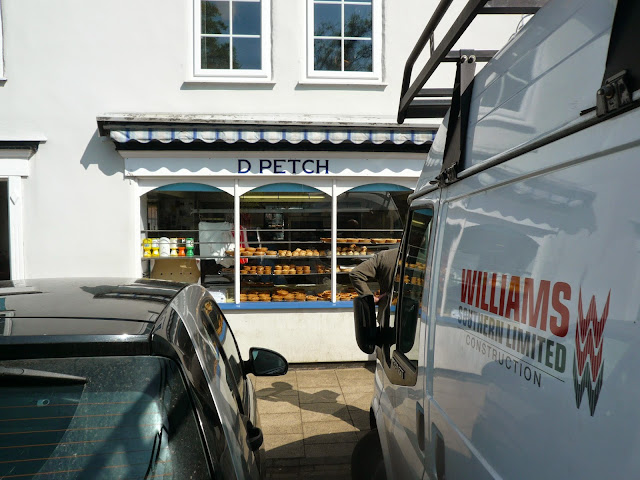 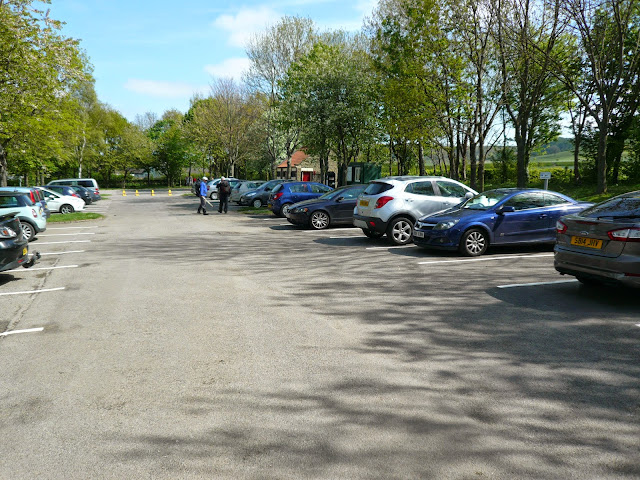 A classy car park, what you would expect in this affluent area.

At the north end of the car park we turned right into Roseberry Lane which took us to a wood and the start of the climb to Roseberry Topping. There are steps of a sort to help prevent erosion and eventually they become a well made stone path that led us to the top. Roseberry Topping is a very popular local walk and the summit had a collection of hikers, walkers, picnicking young ladies and a few dogs. It has a trig point too, which has been decorated by passing walkers. It looks out over a flat agricultural area, much of it growing Rape Seed giving a yellow patchwork effect. And in the distance is the haze of Teeside and its chemical works. 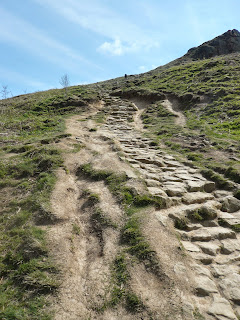 The path up Roseberry Topping 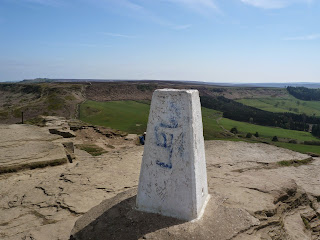 The decorated trig point. No respect some people 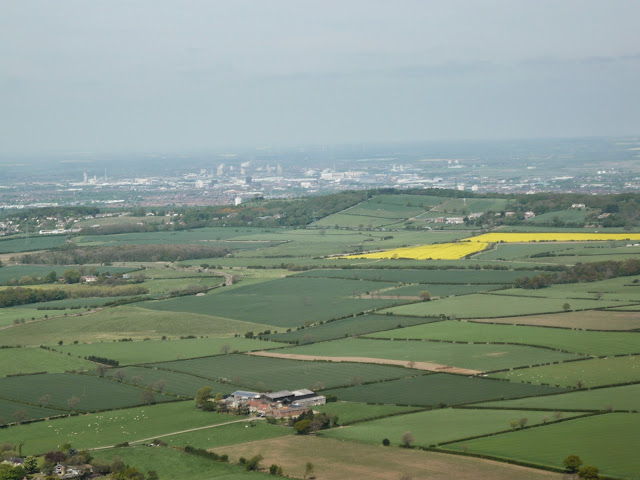 Distant Teeside
After a brief stop to admire the view we walked east down the hill and joined the Cleveland Way, a well  marked long distance path for walkers and mountain bikers. Chattering as we walked along nobody noticed that John was missing until we got to Highcliffe Farm. My phone rang but it was Cheryl who had got a wrong number. It rang again but I was too slow to answer. It was from John though so I called back and went straight to voice mail. Brian's turn to get a call. It was John, he had wandered off in front of us and was at the Cook Monument, several miles away and doing the walk in the opposite direction to us, or anti clarkwise as Harry said. We agreed to meet on the path later. 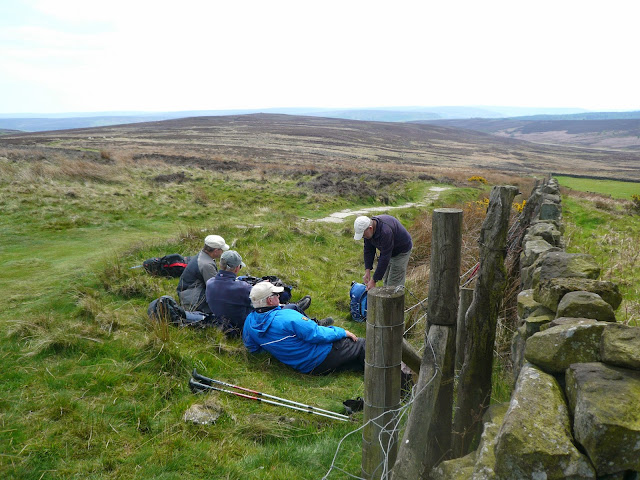 Herbie time; Mrs A spoils us with apricot flapjack. We also had Ben's biscuits, trackers and chocolate, and a sandwich.
Lunch over we headed south east along the track across the heather moor. Looking down into Sleddale we could see a cultivated area, it stood out in the otherwise bleak hills, A verdant oasis!
In one field Dave spotted a group of golden plovers which Ben had missed, strange as he is in the RSPB.
Eventually the track turns south west and then joins a metalled road. After about half a mile we turned off onto a track that curves across Great Ayton Moor. Along the way we met John walking towards us. He decided, rightly, to turn and complete the day with the rest of the team. The track, well worn by cyclists, leads down to a car park and from here a rough path took us through a conifer plantation and uphill to the James Cook Memorial.
For foreign readers, especially those Ukrainians who have been my greatest fans this month, (thank you) James Cook was an English sailor who, skippering the ship Endeavour discovered and claimed for Britain, Australia at the back end of the 18th century. He was killed on a visit to the Sandwich Islands which then became Hawaii, the fiftieth state of the US. Cook was a brilliant cartographer too, he mapped the St. Lawrence River and the west coast of the US. He should have claimed that too. 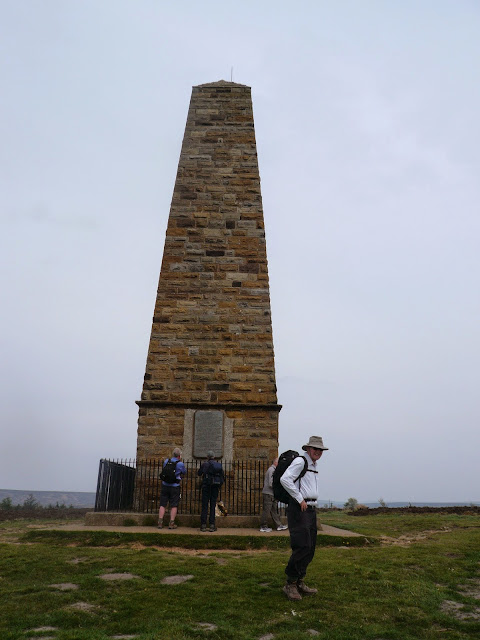 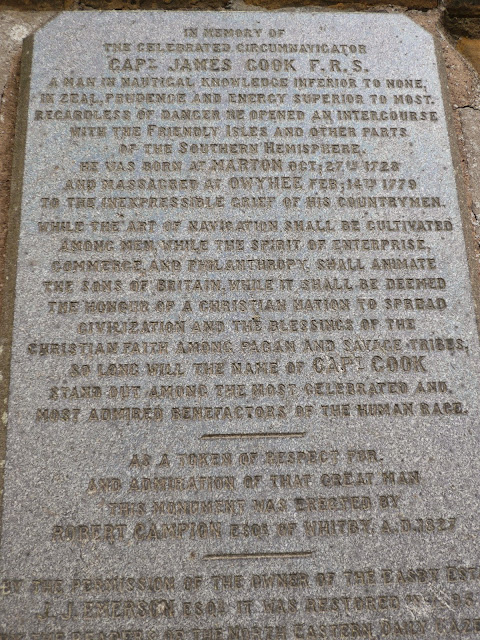 The inscription to a great man and Empire Builder
Walking north from the monument we went downhill before climbing onto Great Ayton Moor again, crossing the Cleveland Way and following the path round Roseberry Topping back to the car park. 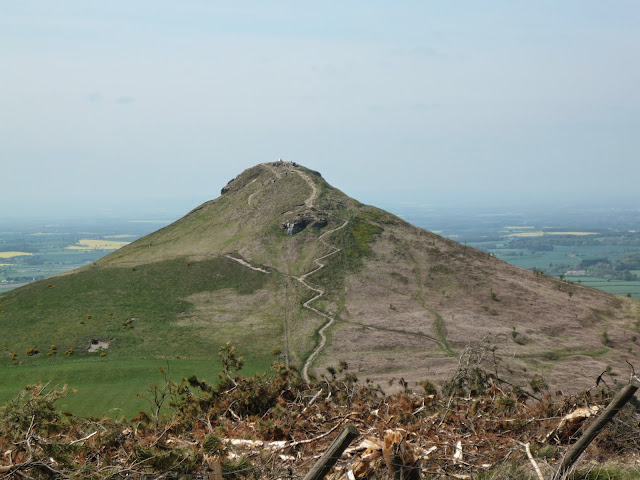 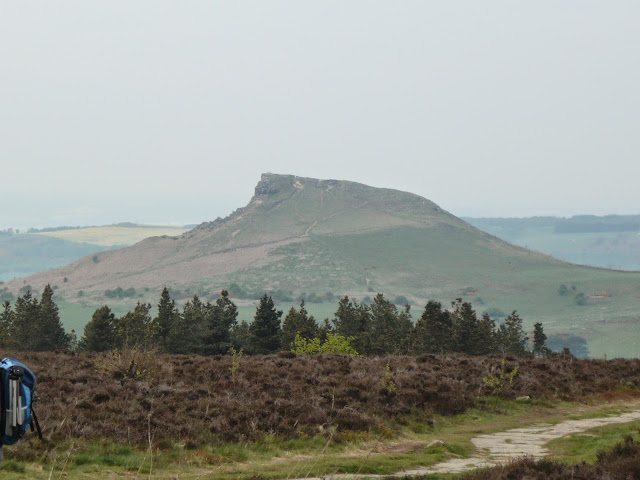 Two views of Roseberry Topping Mining took place in the 18th/19th centuries but its interesting shape was caused by the collapse of part of the hill.
We decided to hjead home for refreshment and stopped at the Cannon Inn in Earsdon near Whitley Bay. Going through the Tyne Tunnel I threw the money into the toll basket but missed. The embarrassment, perhaps I should play cricket for England. Another great gadgie day out. The birders reported lapwings, robins, chiffchaffs, stonechats, golden plovers and ravens. The stars and we heard a cuckoo, the fourth time this month being the plovers. 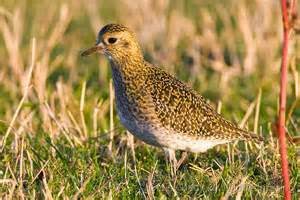 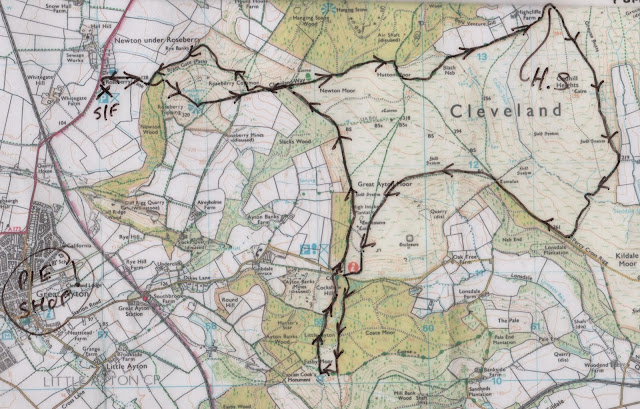