Beside the seaside again................May22nd
Foiled again by the weather we have decided not to cross to the west side of the country for a walk in the Lake District but to stay nearer home where we are promised a dry day. Furthermore as some of us are suffering from slightly damaged leg muscles we are having a relatively flat walk along the coast. One that has been done several times before, one that requires at least two cars or a bus.
The walk starts from Craster (Camp where the crows live). To get there take the A1 north. Just beyond Alnwick (pronounced Annick) turn off the A1 and head east, following sign posts for Seahouses before following signs for Craster. There is a car park just as you enter the village, complete with an information centre and toilets .A charge of £2 for the day is very reasonable. 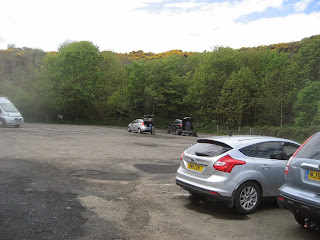 This week's car park
There are six of us today, John C, Brian, Ben, Dave, Harry and me
The walk is covered on two maps OS Explorer 332 Alnwick and Amble and OS 340 Holy Island and Bamburgh, but as the walk follows the coast you could go without.
We started with breakfast (for some ) in the Shoreline Cafe, it was quite busy, not surprising as it has good bacon sandwiches I am told and proper tea, plus friendly staff. 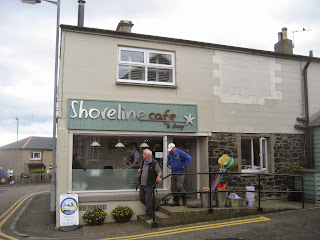 And this week's cafe.
Once out of the cafe we headed north past the Jolly Fisherman pub, famous for its crab sandwiches,
past the harbour  and on towards Dunstanburgh Castle. 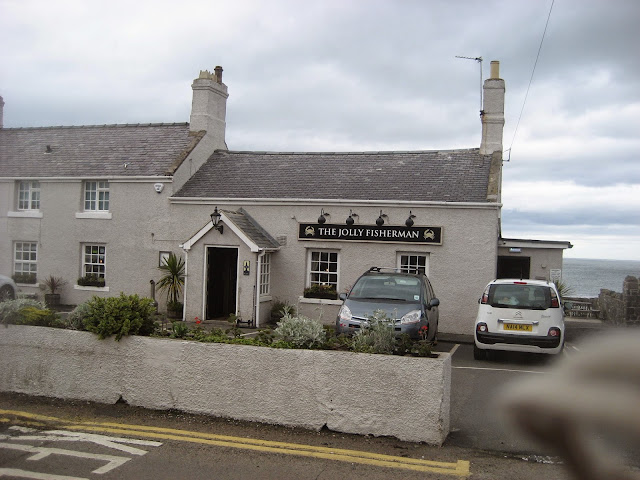 It's a good pub, but we are heading north 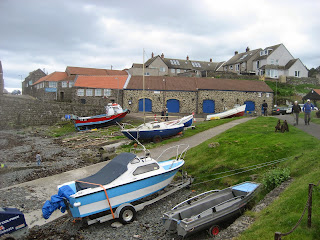 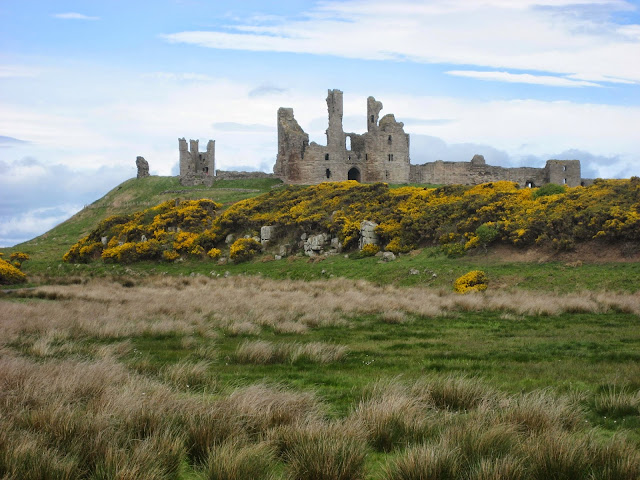 The ruined but still impressive Dunstanburgh castle.
Those Lancastrians certainly knew how to build 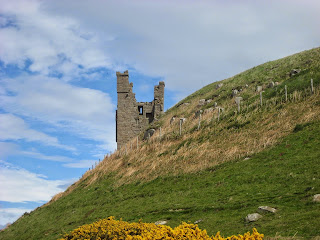 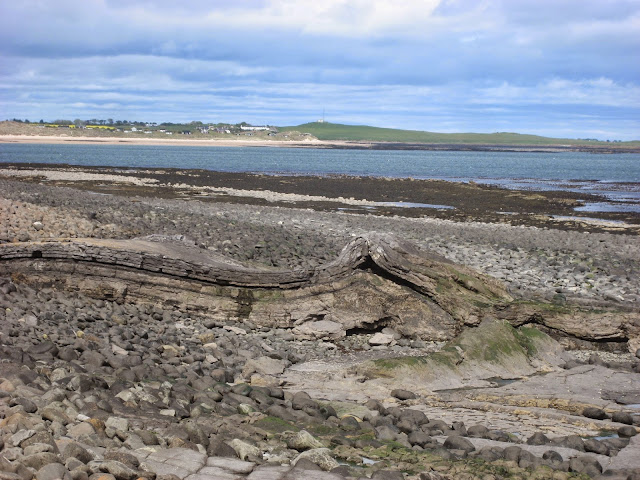 A text book example of an anticline, just north of Dunstanburgh Castle, Newton in the background.
The footpath, which at this point is the Northumberland Coastal Path and St. Oswald's Way crosses the Dunstanburgh golf course, watch out for flying golf balls. But after a while it is possible to walk down to the beach, cross a few yards of large, well rounded boulders and walk along the sandy beach of Embleton Bay. A large curve of sand, very few visitors today, a shame as  the weather was warm with a slight breeze. Next Monday, being  a public holiday, it will be heaving with families. At the north end of the bay is the small square of cottages and a pub that comprise the hamlet of Low Newton by the Sea. The pub, The Ship, frequently appears in articles in the quality  newspaper articles on where to eat out. One of the few pubs north of Watford to be so honoured. It also has a micro brewery. However we called a Herbie Spot and sat on benches in the square.
Lunch today, apart from the healthy sandwiches we carry, was enhanced by Mrs A's home made chocolate chip cookies, superb, Ben's ginger biscuits, up to their usual high standard, fruit flapjack, milky way and chocolate.  (Only 179 lbs this morning, the diet is working, slowly). 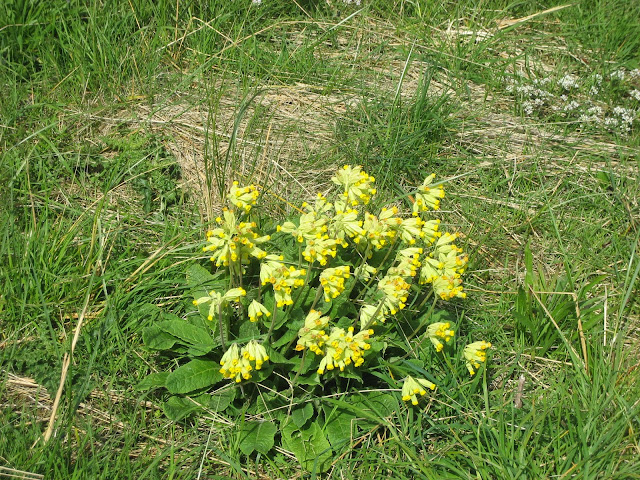 A patch of cowslips. There are plenty of flowers out at the moment 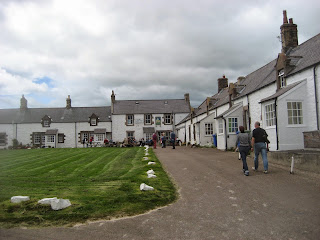 The Ship, Low Newton by the Sea 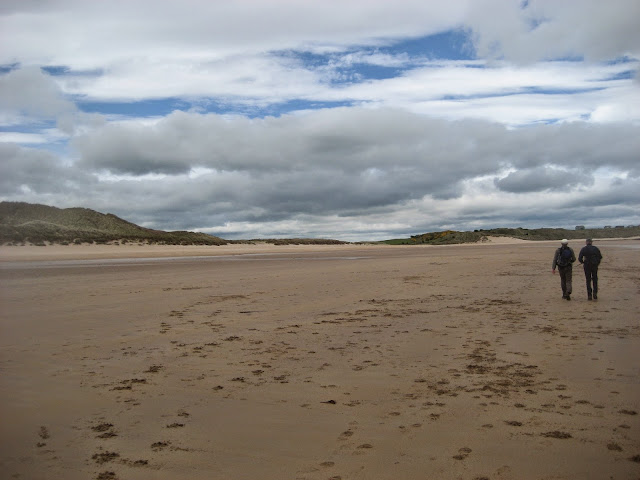 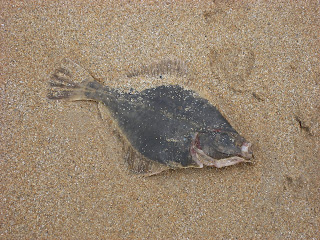 There's a plaice for us
Lunch over we continued for a short way up the road before going through the gate on the right that crosses fields,still on the coastal path and St. Oswald's way until it was possible to walk down onto the beach of Beadnell Bay. Just before the Brunton Burn enters the sea there is, in summer, an area of beach roped off. It is the home to a large colony of terns, mostly of the Sandwich variety. RSPB members try to keep the foxes away from the vulnerable nests. We were told there were about 500 birds there, they made enough noise. If the tide is in it is necessary to go inland and cross the burn by the footbridge but the water was well out today, we walked across the low stream and continued to Beadnell, another Northumberland fishing village. 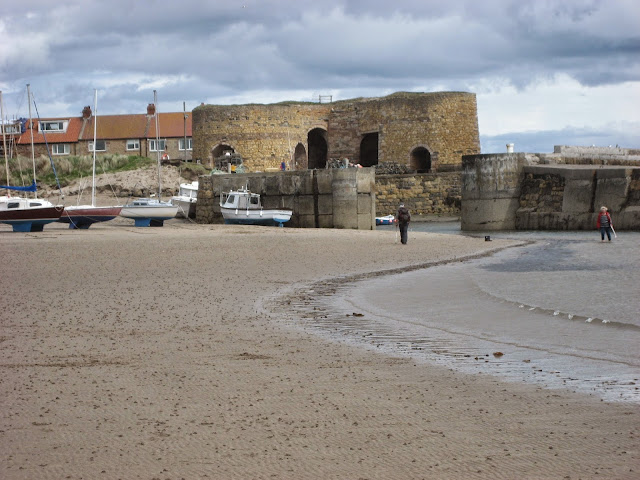 The lime kilns at Beadnell, now used as storage by fishermen 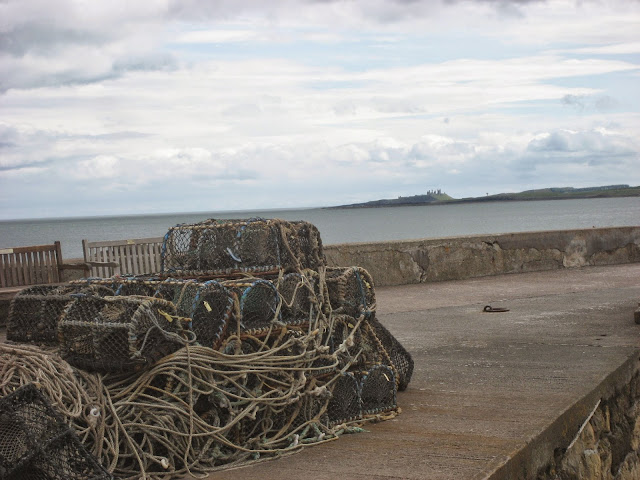 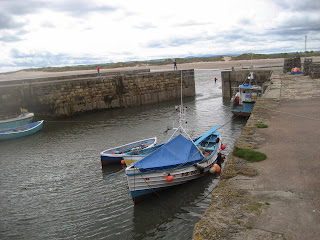 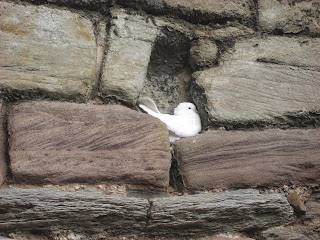 A safe place to nest inside the kilns
We walked through the village and near the campsite again descended to the beach. We continued on the beach  to the Snook, climbed up to the golf course, which we crossed with care, flying balls again, and followed the footpath into Seahouses and to the Olde Ship hotel. This pub has a good range of beers from local breweries, some fun names like Shuggyboat, and it also had Black sheep from Theakstons and Old Speckled Hen. 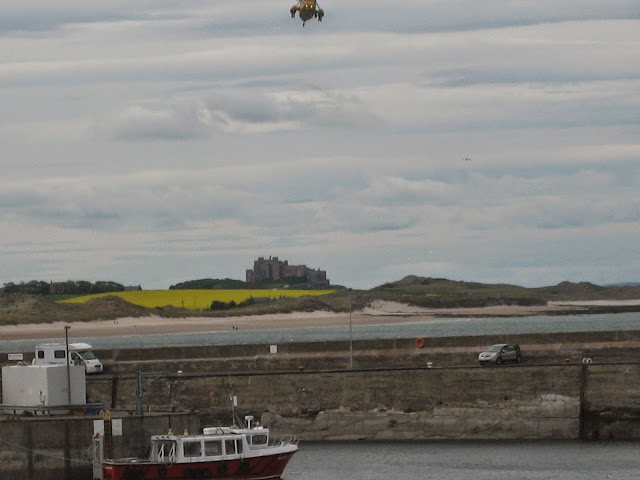 Seahouses Harbour, take a trip to the Farne Islands from here.
Bamburgh Castle in the background. 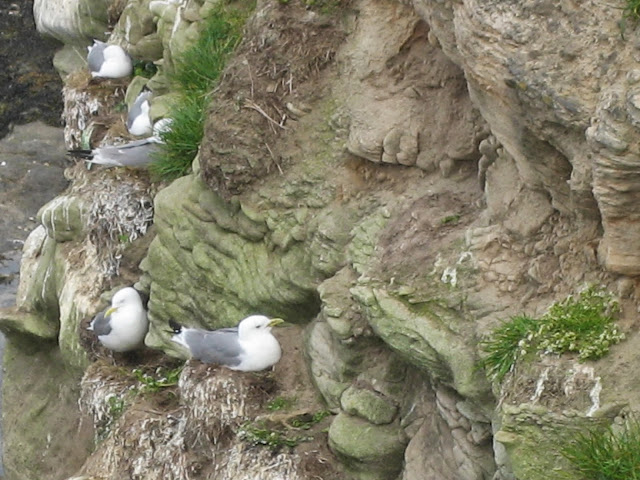 Kittiwakes nesting on the cliffs at Seahouses 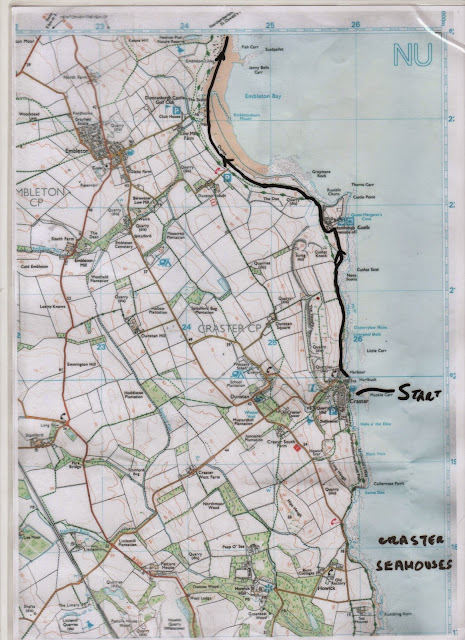 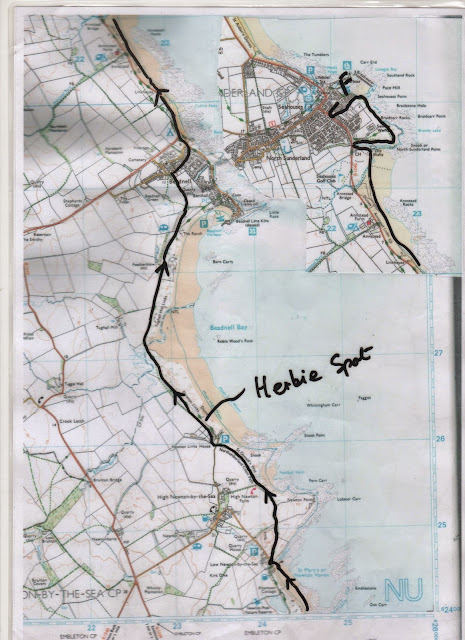 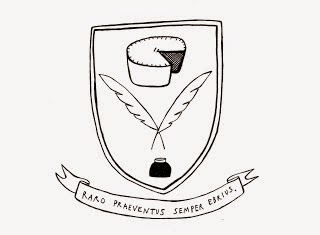 During the last month there have been more hits from Ukraine than any bother country. Thank you