In search of the Kielder ospreys again.... May 19th
An extra walk, for Dave and I as nobody else wants to join us down the north side of Kielder Water looking for the ospreys that nest there. This is either a two car walk or a bus walk from Falstone at the south end of the reservoir. To get to Falstone go west on the A69, turn north near Corbridge on the A68 and turn west at the signpost for Bellingham. Turn right for Falstone when you see the signpost and park up beyond the cafe. From Falstone catch the 880 bus operated by Howard Snaith at 10.35 am and stay on it to Kielder Castle. There are only a couple of buses a day, it is worth checking with the company and anyway the service will change on August 1st.
A map is not essential as the route follows the shoreline south back to Falstone but if you want one use OS OL 42 Kielder Water and Forest but note that if you follow the north shore there is no escape route, once started you are committed to completing the walk or turning back, less than half way presumably.
Kielder Water was built by damming the North Tyne. The  intention was to supply water for industry, it is now used as a reservoir and large wet leisure park for yachting, fishing and watching ospreys.
BUT BEWARE! I RANG THE BUS COMPANY ON MONDAY MAY18th AND CHECKED THAT THE BUS WAS RUNNING AND THAT IT CALLED IN AT FALSTONE. I WAS ASSURED ON BOTH COUNTS. BUT AS WE WAITED BY THE BUS STOP IN THE VILLAGE WHICH IS ABOUT A QUARTER MILE OFF THE MAIN ROAD WE WATCHED THE BUS DRIVE STRAIGHT UP THE MAIN ROAD. IF YOU CALL TELL THEM WHAT DAY YOU HOPE TO CATCH IT OR YOU TOO MAY BE LEFT 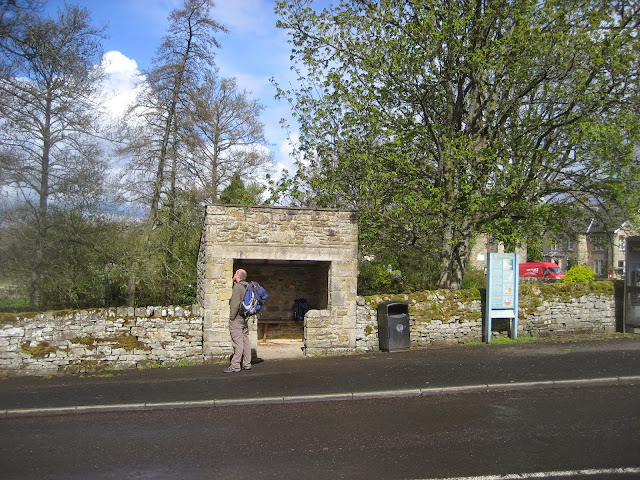 Dave wonders where the bus is, certainly not in Falstone.
A quick change of plan the, we decided to walk to Kielder and catch the 5.25 bus back to Falstone, having called the company again to complain and to check the afternoon bus would be there.
We had parked the car near the village play ground, just beyond the Presbyterian church. As I sat on the low wall to put my boots on a wagtail flew out of the wall, leaving its nest and five eggs. We left sharply so as not to disturb the bird too much. 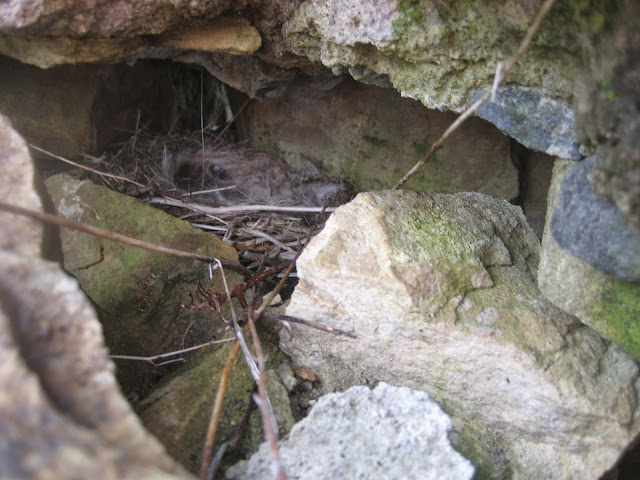 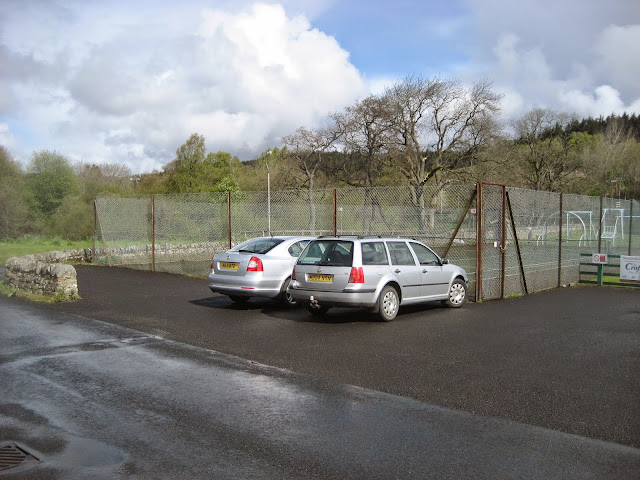 This week's car park
We walked past the playground and followed a footpath across a couple of fields below a housing estate until we came to the dam embankment. Close to the embankment there were two roe deer feeding on the grass. The footpath follows the side of the dam by the sluice for a short while, passing a car park and toilets before joining the purpose built walking/cycling track that circumnavigates the lake, all 26 miles of path. 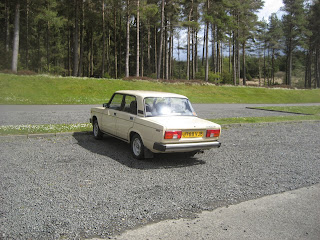 It's a Lada, not many of these Russian built cars around these days.
There is a series of art works on the lakeside path but we have visited all of them on previous walks so we decided to give the first one, The Wave Chamber, a miss and continue on our way, watching the numerous chaffinches swooping from tree to tree. The Belling inlet is quite long but, it's on the path, unless you want to swim and cut it short. It also has one or two short and not very steep climbs and the view of the lake is cut off, hope there are no ospreys fishing! Nor did we visit point 55/02, which is a lakeside viewpoint and  with those figures of longitude and latitude.
And then it rained, heavily for a short time, and then it hailed, quite large lumps that stung the face.
We called in at Belvedere, beautiful View and took shelter from  the rain as we called a Herbie Spot. Belvedere looks out on the lake, is made from shiny metal and has seats inside, ideal place for lunch. 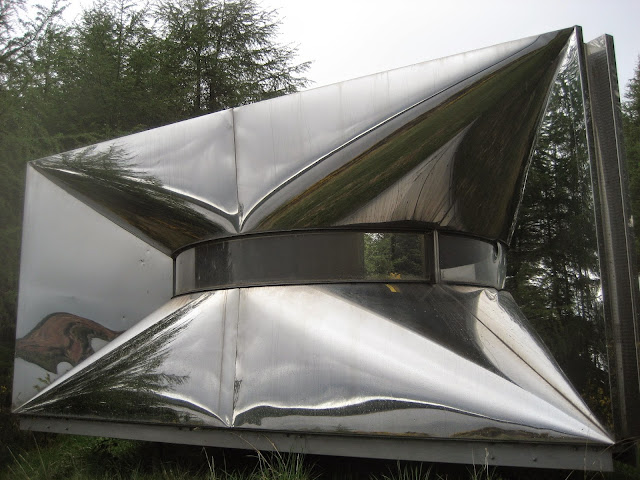 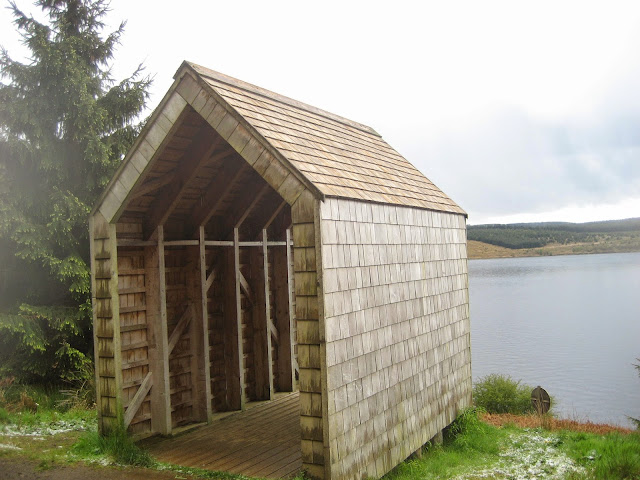 Robin's wooden and draughty cabin
Moving on in another shower we chose not to call at the Janus Chairs, nice though they are. Three large wood and steel chairs that rotate, allowing you to watch the water or the trees behind you. On previous, drier days they have made it as Herbie Spots, but not today. 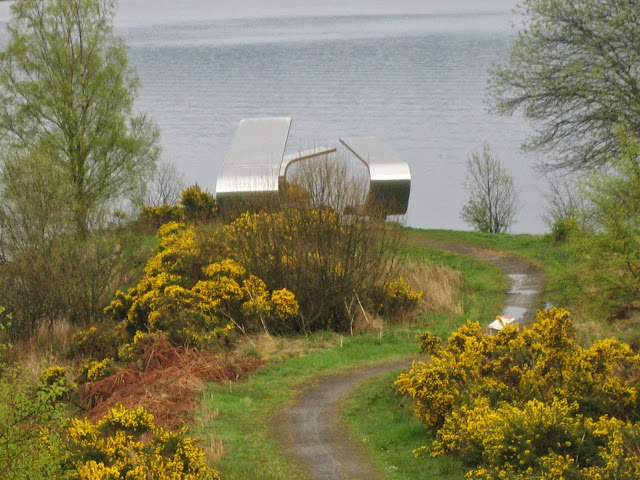 The Janus Chairs, surprisingly they can face both ways
Beyond them on the walk is Plashetts Burn, once the site of a coal mine with a short railway that ran down to join the main North Tyne Railway that ran from Hexham to Riccarton Junction in Scotland, the mine has gone, the railway is below the water. 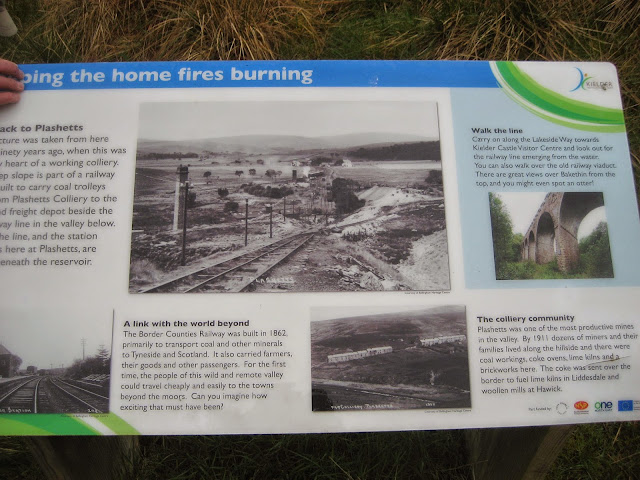 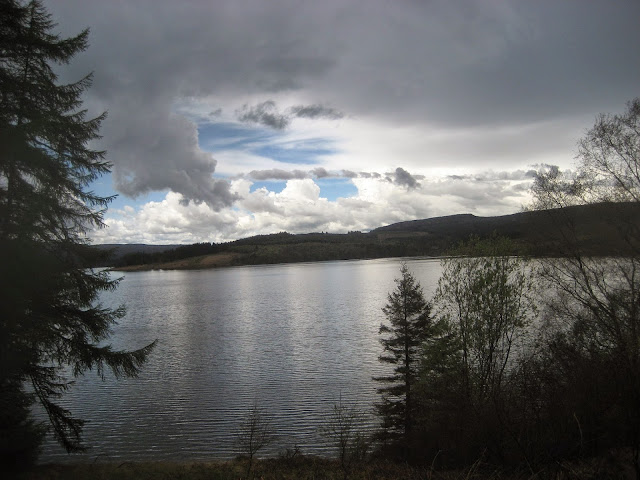 Storm clouds gathering over the lake.
And then there was a thunderstorm, mostly over the far side of the lake but the thunder rolled round the hills and the lightning lit up a gloomy afternoon.
We also missed out on the next view point which looks a Trivial Pursuit "cheese" holder and is meant to represent an OS Viewpoint. The track down to it is very muddy, thanks to the cows.
For non Latin readers the next art work is called "Forest Head" or  Silvas Capitalis. It is a huge wooden head, you can go inside and climb up to eye level but there was a party of junior school children playing hide and seek round it so we left them to it. 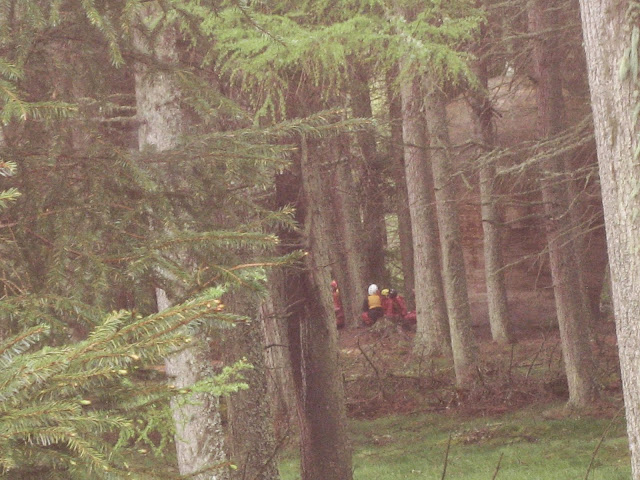 You can almost see the wood for the trees, the head is to the right of the children 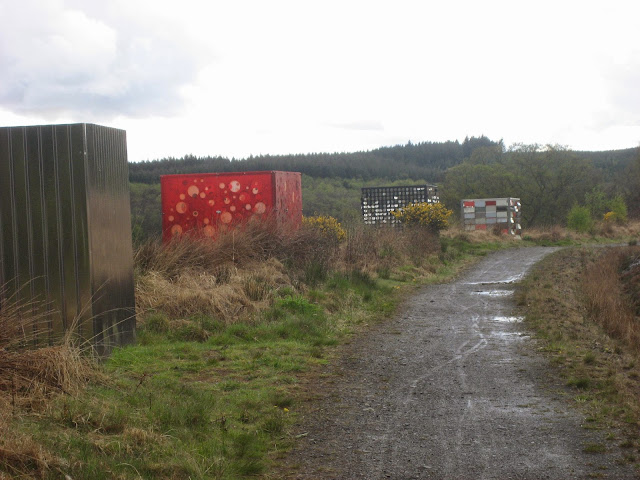 Beyond the Silcas Capitalis are the salmon scales, originally on display on the Tyne near Hexham to celebrate the return of fish to the river.
Next stop the remains of the old Bakethin Weir, the smaller reservoir that was built long before Kielder. On the far side of the water is the Kielder Column, another art work. 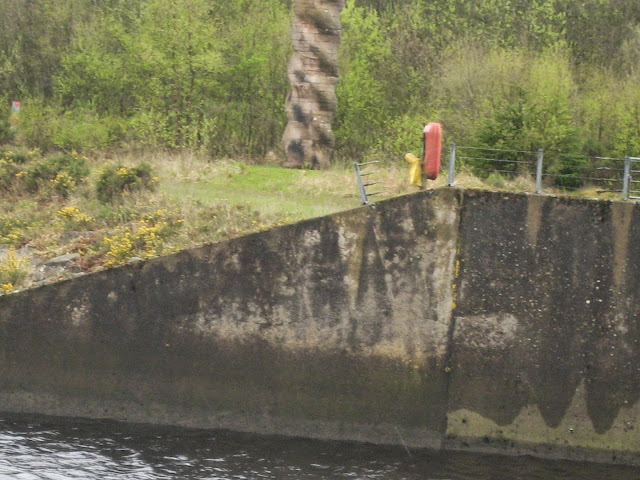 A bad photo of the Kielder Column at Bakethin..... 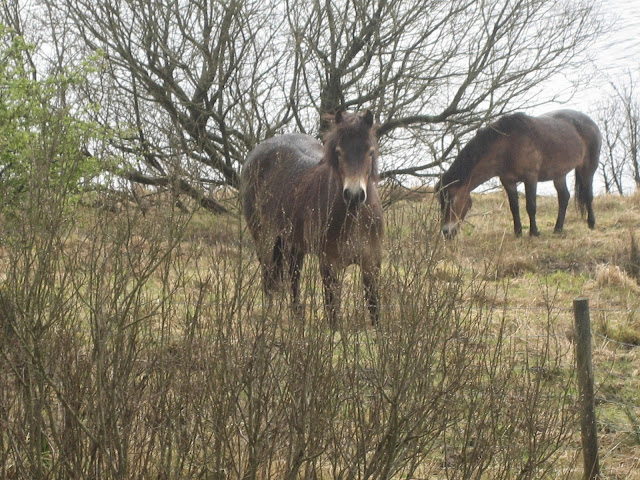 ..... and a nice photo of the New Forrest ponies that live nearby. 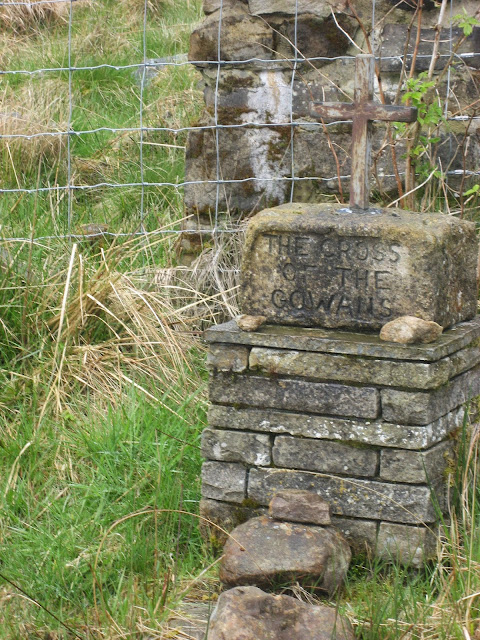 The Gowans Cross, needs researching.
The railway line crossed the river near Kielder by means of a viaduct. The railway has gone but the viaduct remains and is part of the walk. It has been decorated with wrought iron work. 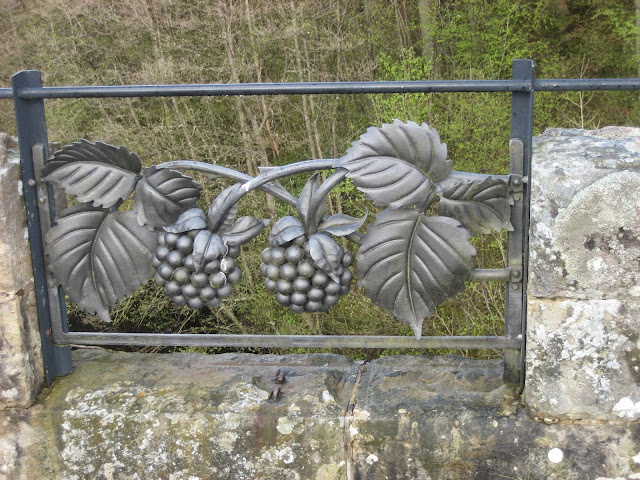 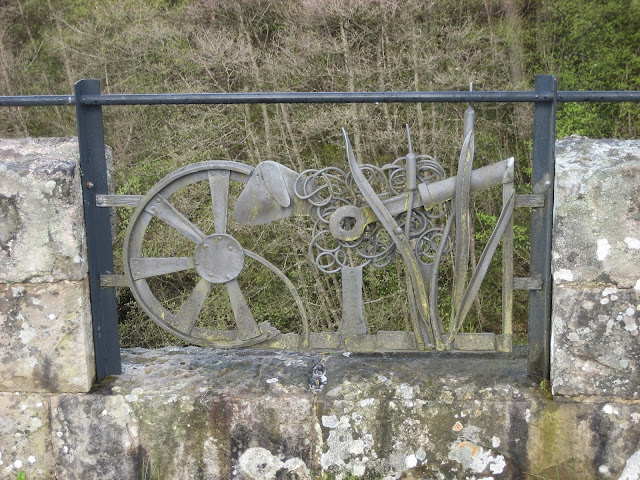 Two of the panels on the bridge.
Beyond the viaduct the path leads to the village of Kielder and then up to the castle, once the Duke of Northumberland's Hunting Lodge and the official end of our walk. Fortunately the cafe and information centre was open as we had about forty five minutes to wait for the bus to take us back to Falstone, and yes it was there, on time too. 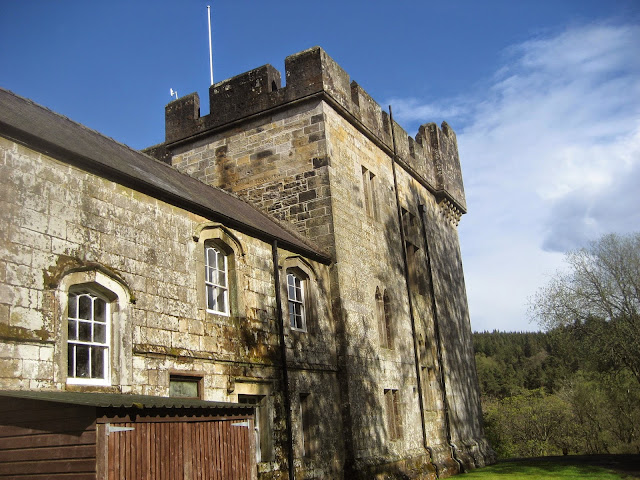 The hunting lodge at Kielder Castle, now a cafe with a screen showing live from the osprey's nest. 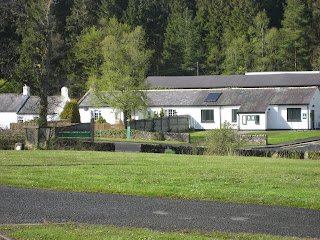 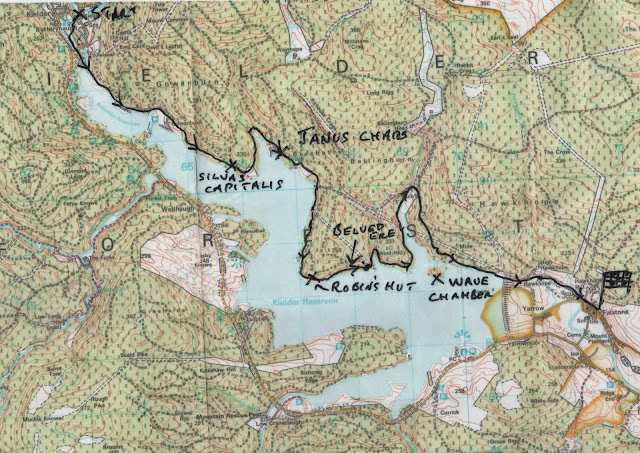 Contains OS Data, copyright. Crown copyright and data base right 2015
and you probably realise we did the walk the other way round