Another repeat, based on the pretty village of Blanchland, close to the county of Durham. There are seven of us enjoying a beautiful sunny day in the middle of October,  blue skies, no wind, perfect Autumn day for a walk.

There is a large car park close to the village. It has an Honesty Box and of course gadgies are honest. 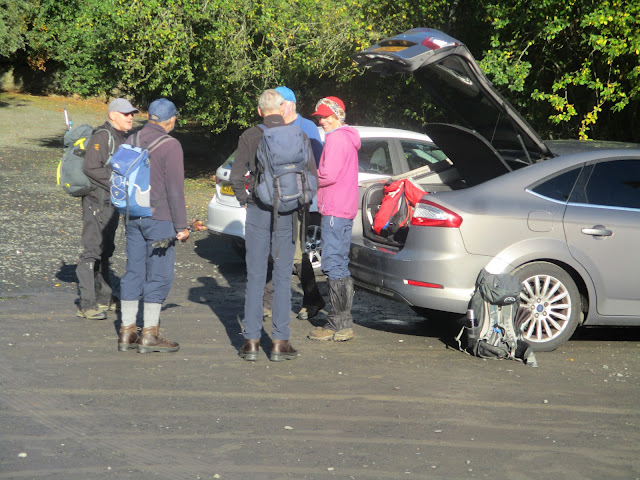 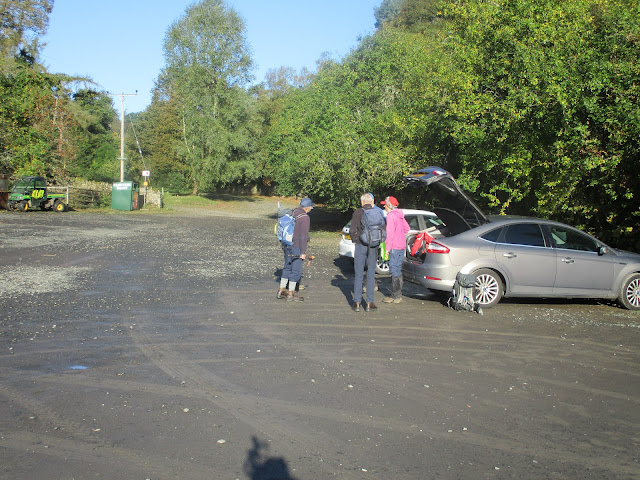 Getting ready for the walk in the car park at Blanchland.

Blanchland is on the edge of one map, part of the walk is on another. The two are:

The White Monks cafe in the old school makes a good starting point to the walk. 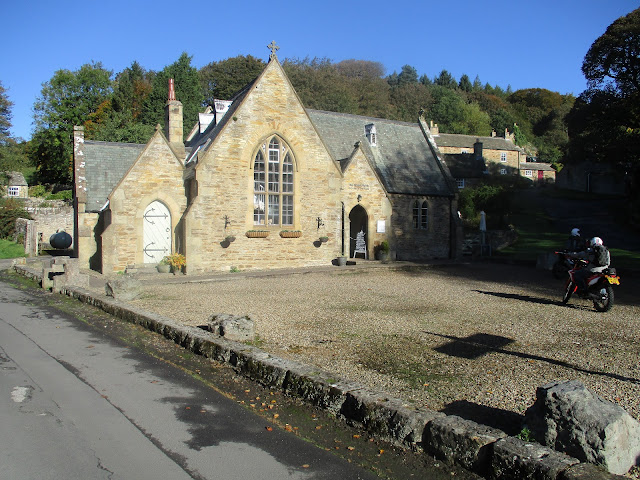 Having breakfasted we set off  a little way down the village road before turning right on the road to Baybridge. However, to avoid walking on the tarmac we walked through the fields to a junction. From this point on we followed the track to Newbiggin, passing farms and a large house, wooded hillsides, some of which had been replanted, hopefully with deciduous trees until we reached the ruin that was once the farm at Riddlehamhope. 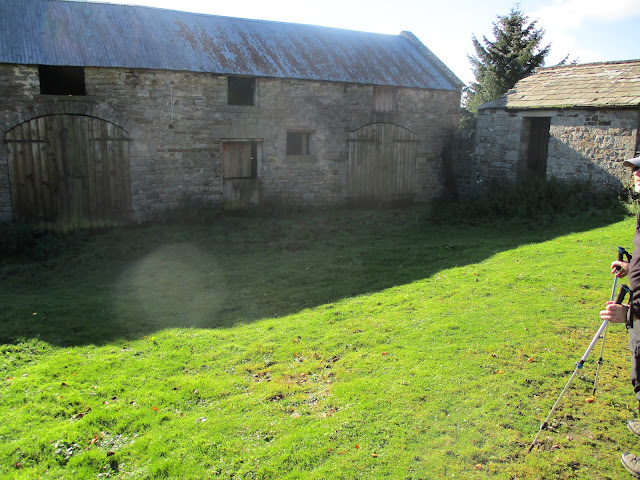 All that remains of  Riddlehamhope farm. Three miles in on the walk it was too early to lunch here although it has been used as a picnic site on previous occasions.

From the old farm the route turns north, passing a sign post for Heatheryburn, we did not follow it but walked on to the farm at Harwood Shield. 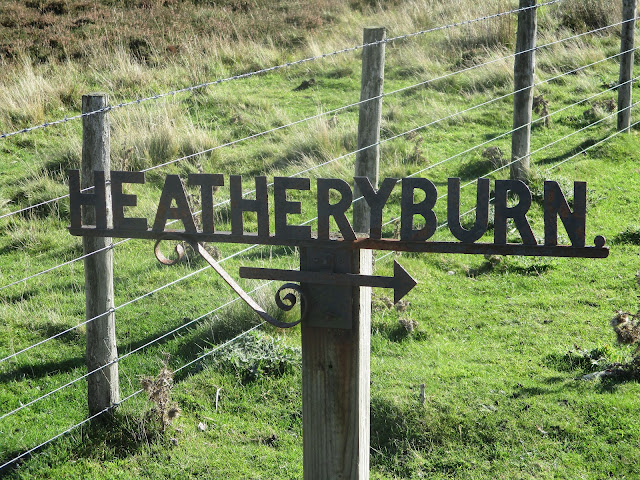 Not this way on the walk today.

The path goes through the farm yard at Harwood and then across fields to the next farm at Stobby Lee. At this farm we went slightly off piste but regained the track to the next farm at Steel, then Long Lee where again we lost the path. Having regained it we followed a footpath across fields to New House, crossing fields with slippery ladder stiles we made it to Hesleywell before turning east. After about 7 miles I for one was more than pleased when a Herbie was called . We sat on the side of a strange ditch which even the resident archaeologist failed to explain. It didn't matter, it was sunny and warm. 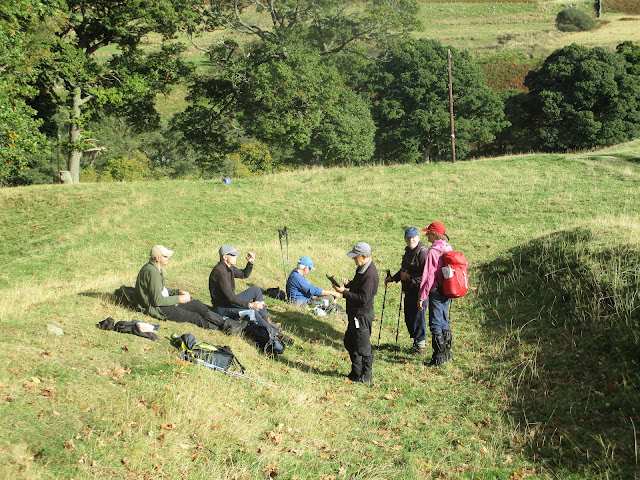 Lunch over we headed downhill to Burntshield Haugh before starting the long climb up Burntshieldhaugh Fell, a heather covered moorland with a row of shooting butts too. 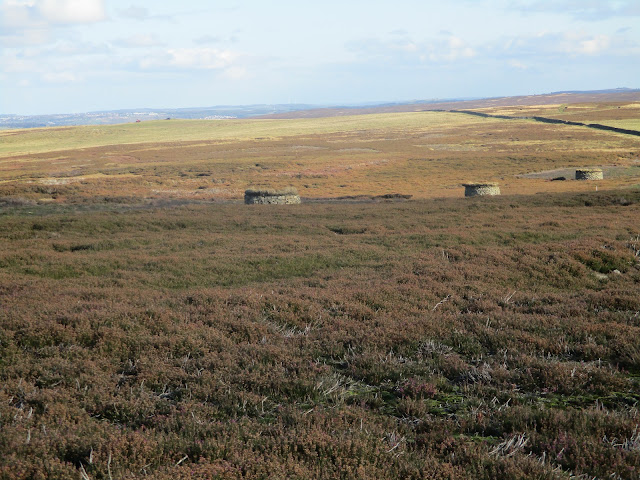 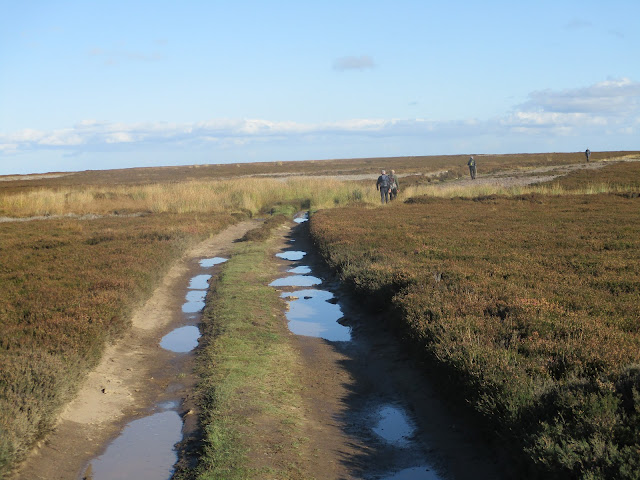 And the track on the same fell.
Turning right at the next track junction we walked down to Pennypie house, so called because in days of yore when drovers crossed the moors with their cattle the farm provided pies for a penny.
At this point there are two ways of returning to Blanchland, one following the Pennine Journey marked on the OS map or the right fork which we took. This track eventually becomes a tarmac road but some way down, spotting a finger post on the left we followed a footpath across fields to Cote House Farm and the road back to the car park.
On the way home we stopped for a drink at the Derwent Arms in Edmondbyers which used to be the Punchbowl. Refurbished and with several ales on draught it was a good choice too. 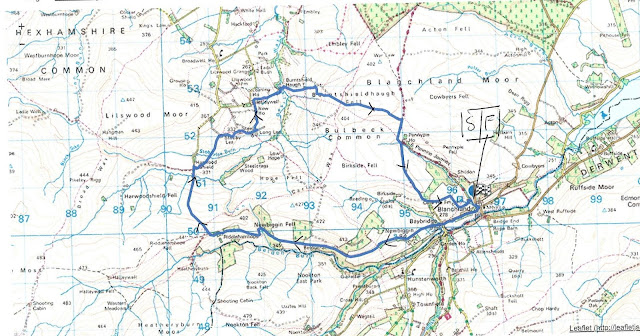 Contains OS data, copyright. Crown copyright and database right 2021
The walk is about 11 miles with some climbs and some spectacular views.

And some extra photos; 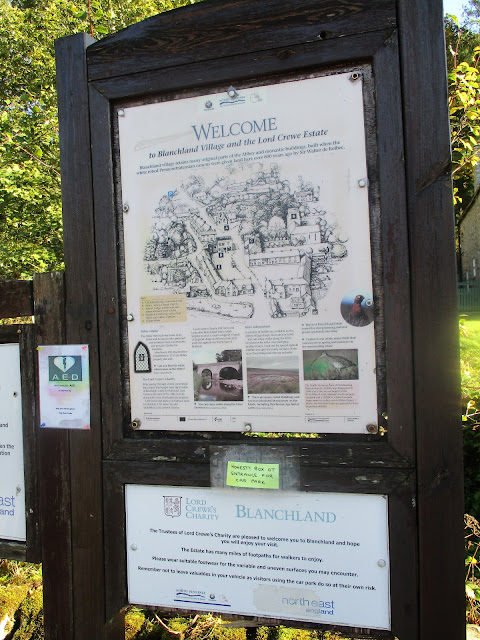 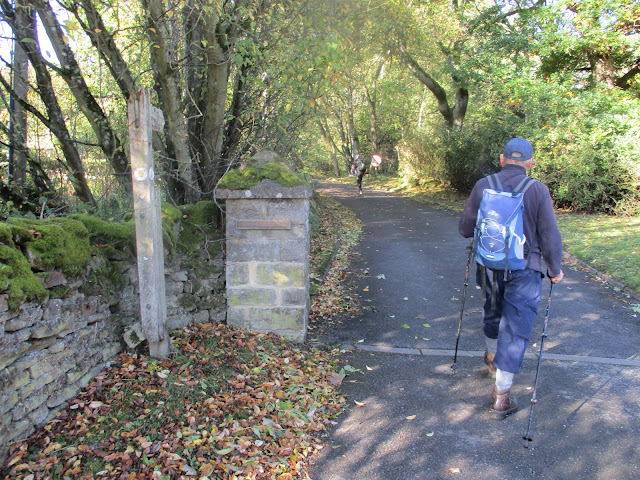 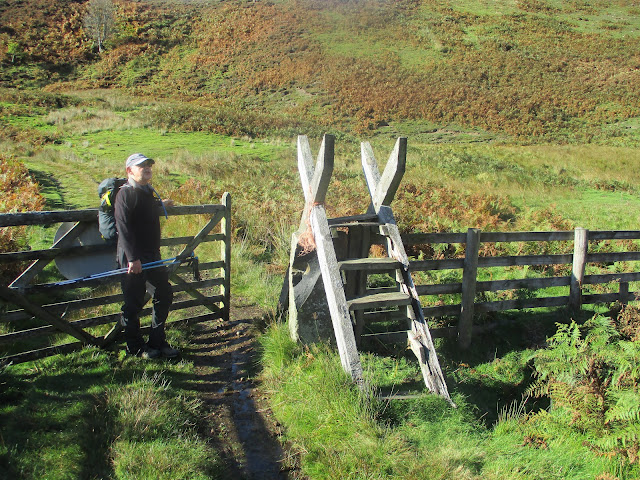 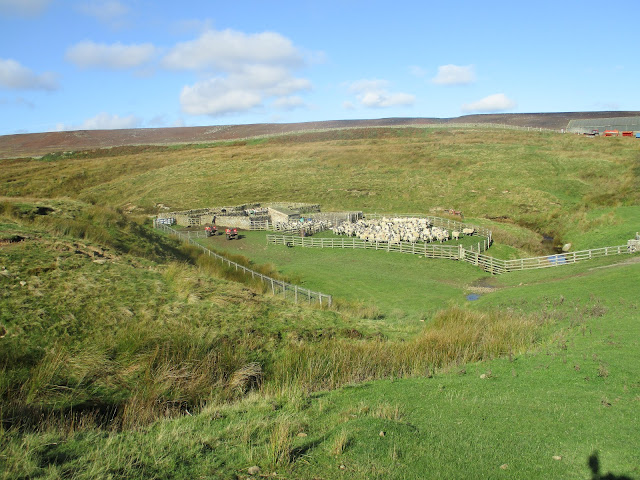 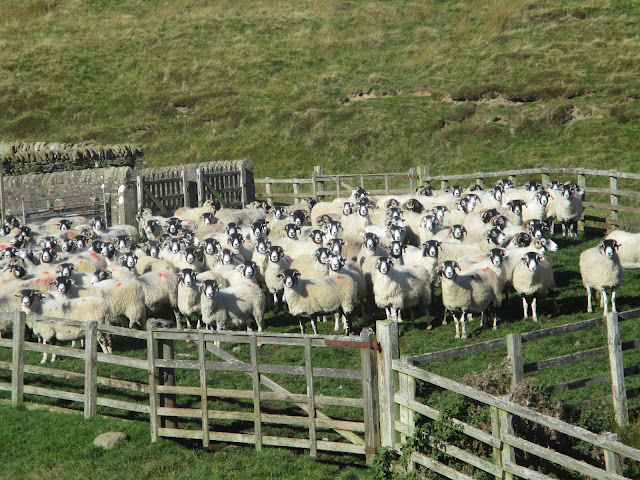 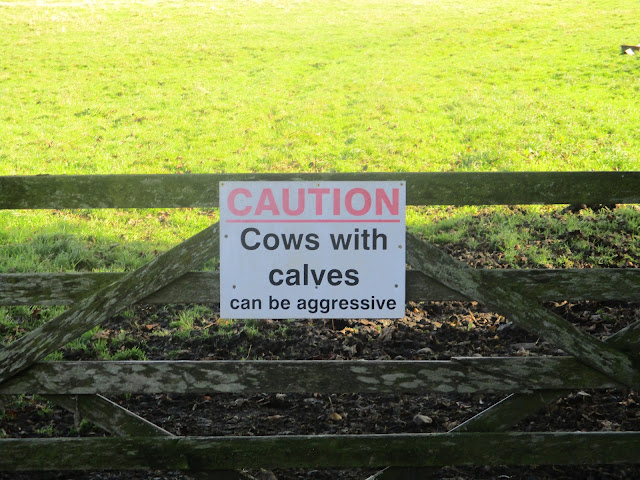 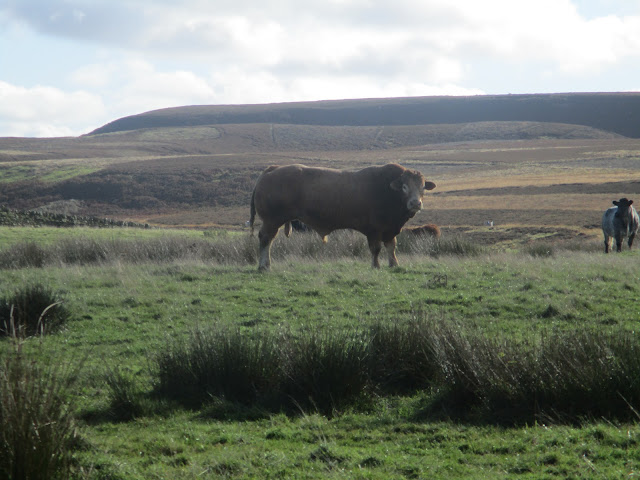 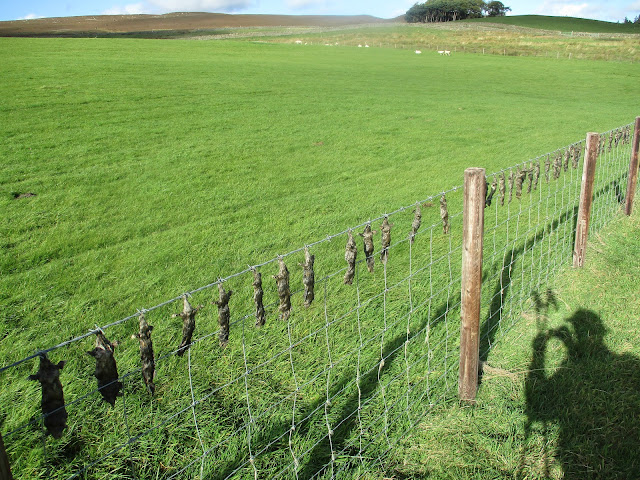 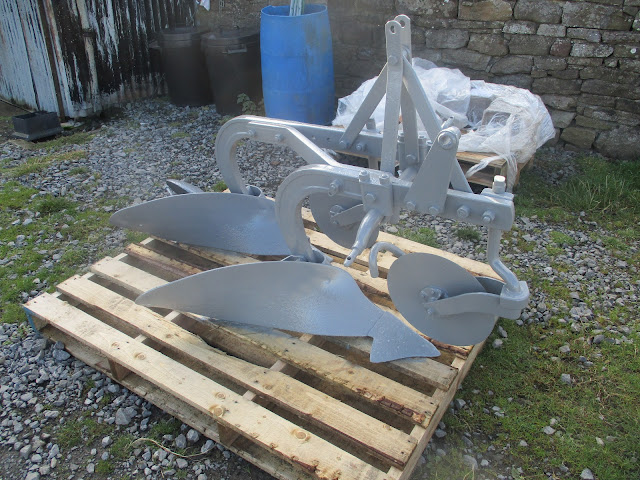 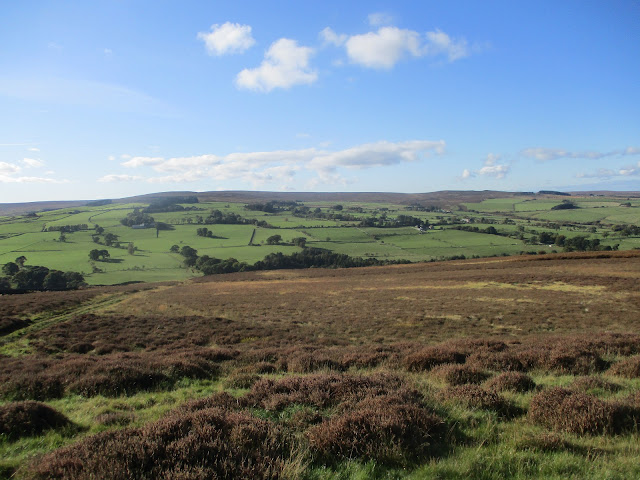 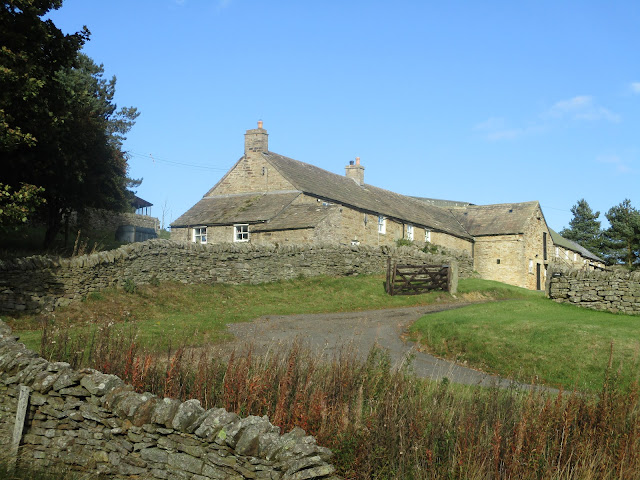 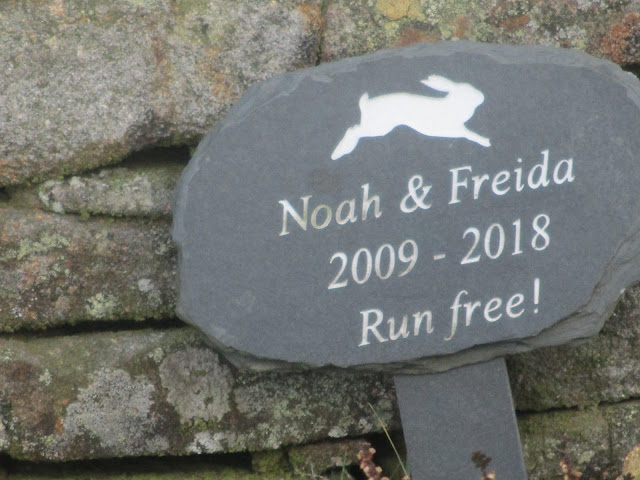 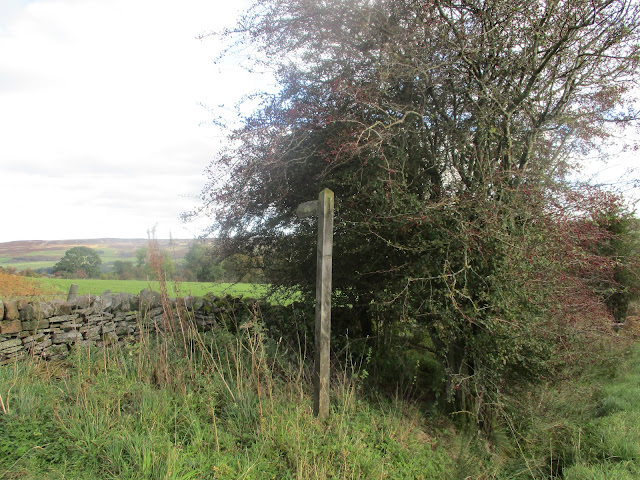