Today's walk has been devised by John C. Based on Eglingham, a linear village with a population of about 100, a few miles north of Alnwick, it combines sections of other favourite gadgie strolls.

To get to Eglingham take the A1 north, turn off and go through the town, take the Wooler Road and five miles later park in the village, There is some parking on a lane to the church, (St Maurice, 13th C) and some parking on the roadside opposite the pub, the Tankerville.

The map to use is OS Explorer 332 Alnwick and Amble.

There is a team of eight out today, me, Harry, Dave, John H., John C, Ben, Margaret and Brian. 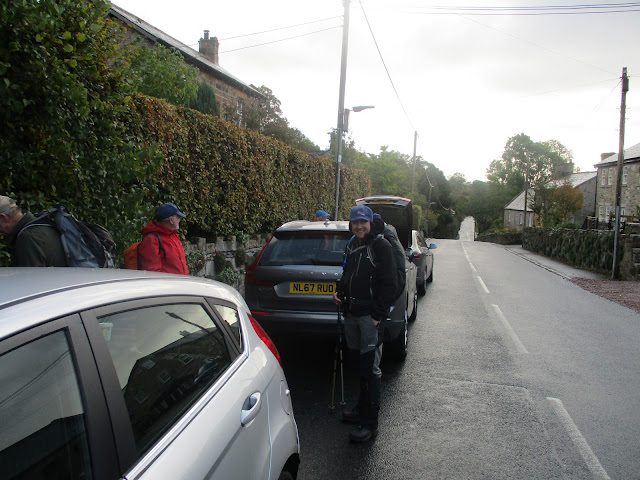 Not a prize winner for car park of the year but here we are in Eglingham.

Kitted out, on a dry day after one early shower, we walked up the village street, roughly west until we turned off at a lane near Cockhall. This lane led us to the first and only ford of the day. Sometimes we are advised to take plastic bags for the fords we cross but for this one we made do with the stones, some of which were slippy. 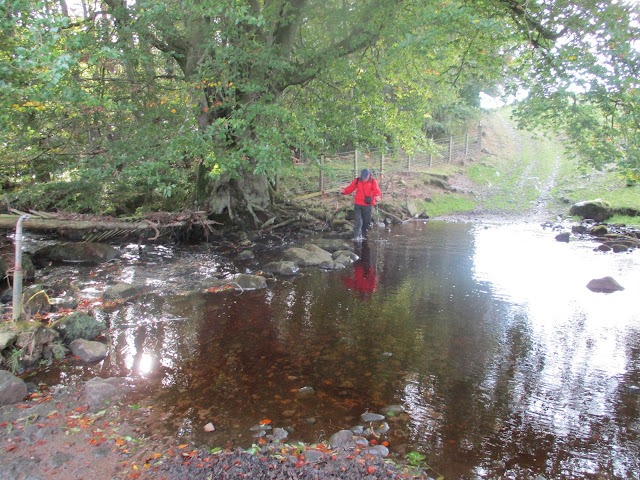 Harry takes to the water. (Watch this week's video at the end!)
Having crossed the dangerous stream we headed north uphill, then north east until we met a farm track . (mile 1).  Here we turned left and continued towards Harehope, passing a row of bee hives on the way. 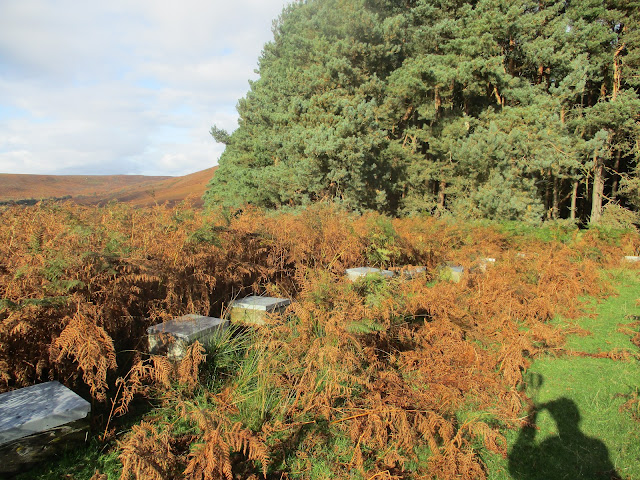 Beehives and shadow
However along the track we were passed by a convoy of pickups and 4x4s, loaded with guns and dogs. They were off on a partridge shoot on Harehope Hill. Our original plan was to take a path on the south side of the hill but they politely suggested we should head for the "Posh Cow Shed" and take the track to the north of Harehope Hill. They had guns and dogs so we did. 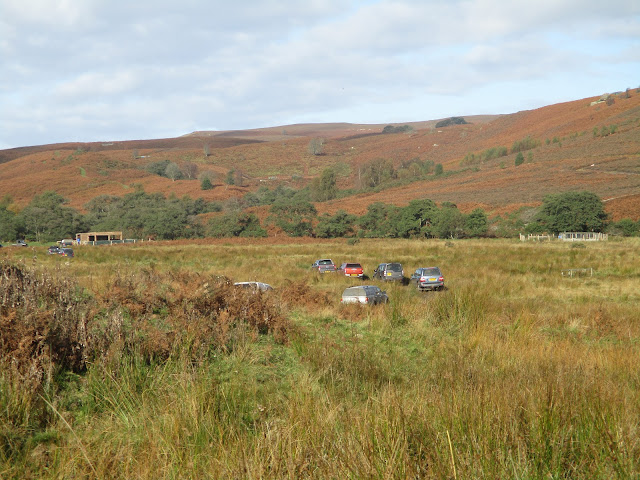 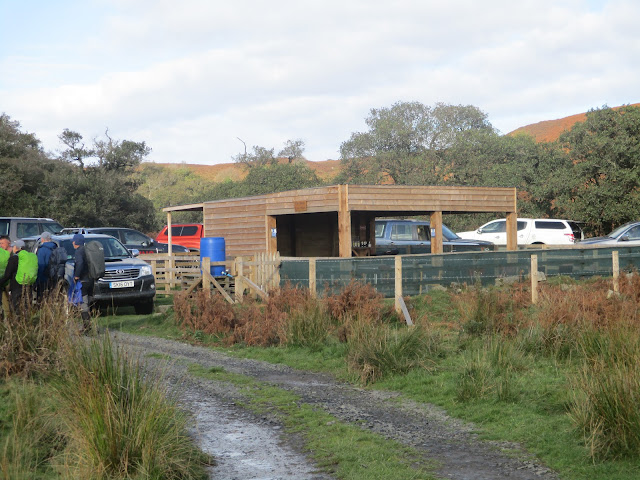 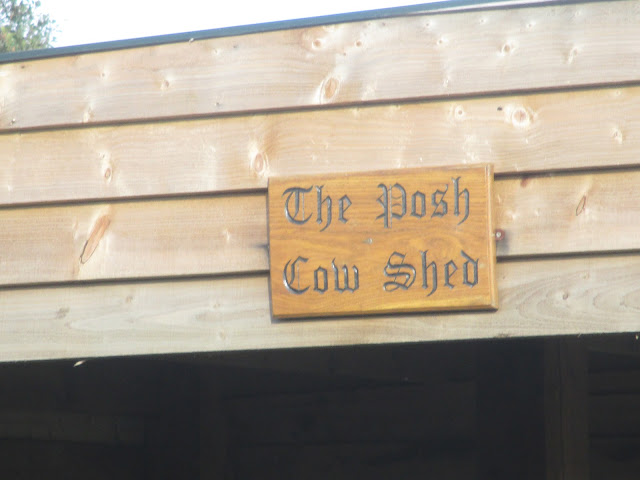 The wagons circle at The Posh Cow Shed.
There was a short but steep climb up Tick Law, which seemed tick free. On the top we came across a large piece of rock decorated with cup and ring markings. 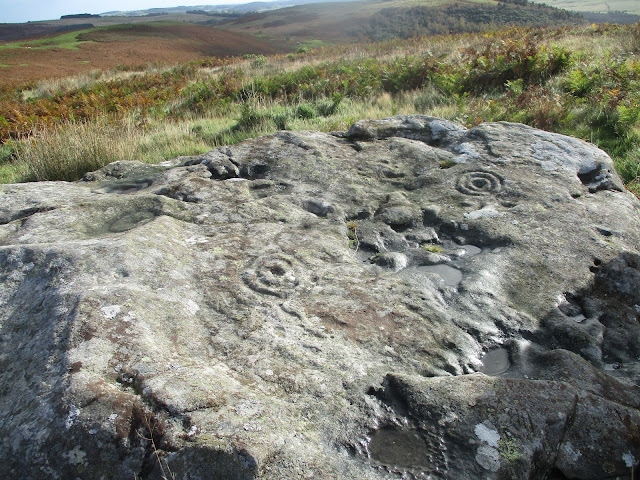 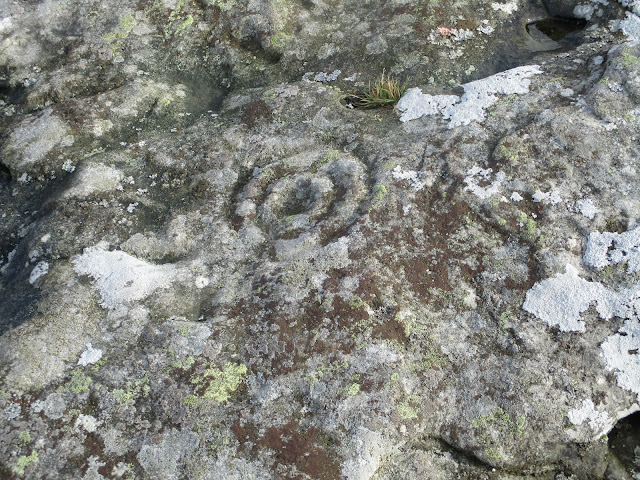 Nobody is sure what these ancient markings mean or what they were for. They occur at several Northumberland sites and other places in Europe too.
Not too far further on (mile 4) we came to the remains of the prehistoric hill fort at Old Bewick. Little remains but the inner and outer walls, covered in bracken and reduced in height but still impressive. 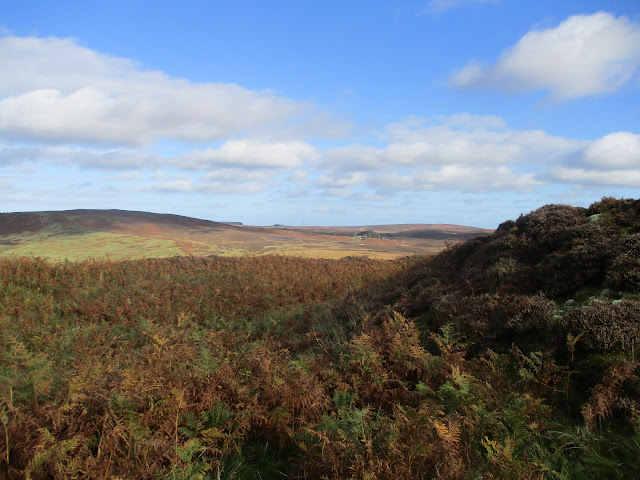 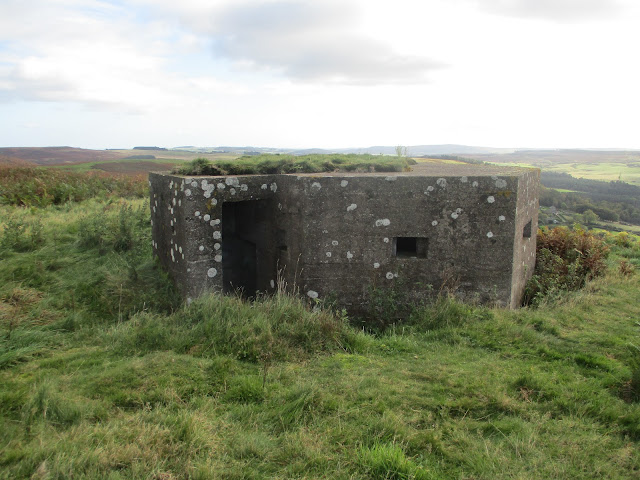 And its modern equivalent. Built in WW2 when it was thought the country could be invaded from Norway there are many similar pill boxes in Northumberland.
Moving on and a little unsure of the track to take we wandered a little, split into two groups and eventually Dave, John H and I found a good track that led north east towards lunch. The other five found a similar track and we met at Blawearie, a ruined farm. 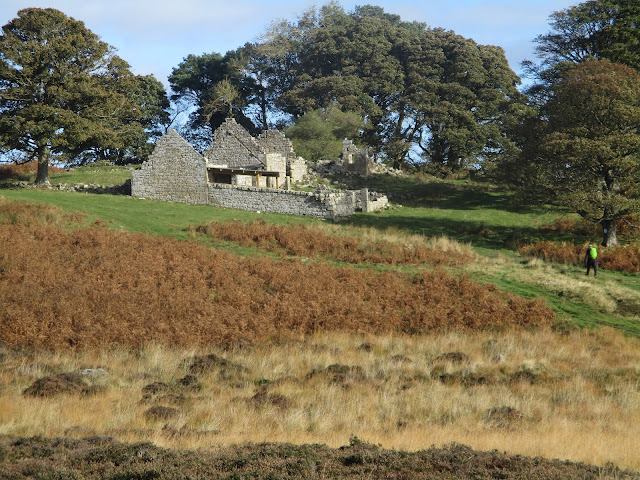 Blawearie (cf Wuthering heights) was built in the 19th century by the Rogerson family. Abandoned in the 1940s it fell into ruin, but... 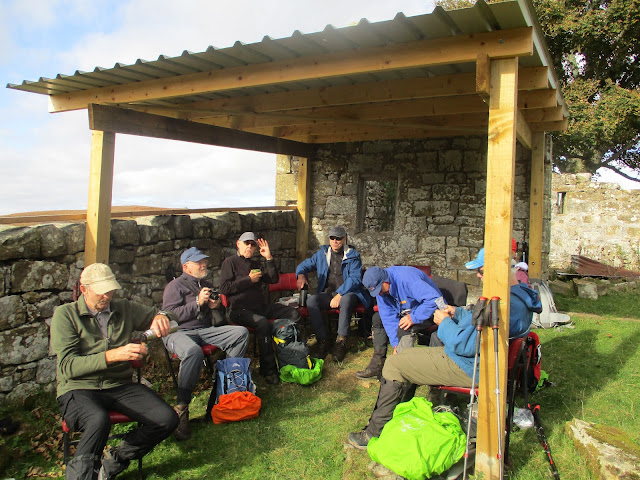 This shelter, presumably built for shooting parties, is relatively new and made the best Herbie Spot for a long time. IKEA biscuits, (already assembled) flapjacks, Ben's ginger biscuits, almond slices, sweet and sour savouries from Mrs A..
Lunch over we moved on, taking the track behind the old farm. We headed north east, crossing several streams without the need for plastic bags until we came to a marker post that suggested we turn right and head up Cateran Hill.
A steady climb with several cairns along the way. Near the top of the hill, off to the left is the Cateran Hole.
This is a cave some 30 yards long, entered by carved stone steps. Nobody is sure what it was used for. One suggestion is that it was a tunnel from Chillingham Castle, another mis that it was used as a store for smuggled goods. We have visited it several times and gave it a miss today.
We followed a grassy and rathe boggy path down past Hare Crag (mile 8) until we joined a well made farm tyrack heading south over Eglingham Moor. At Tarry (mile9) the track became a metalled road and soon we were back in Eglingham.
Changed we decided to head for the Shoulder of Mutton in Longhorsely. The hotel had three ales on draught, Timothy Taylor's Landlord, Directors and a blonde. We tried Taylor's but it was the bottom of the barrel so we switched to the blonde. 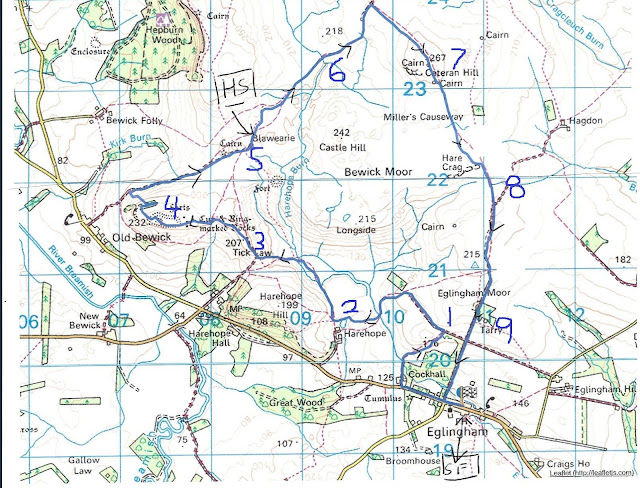 Contains OS data, copyright. Crown copyright and database right 2021
The walk is about 10 miles with a couple of short climbs 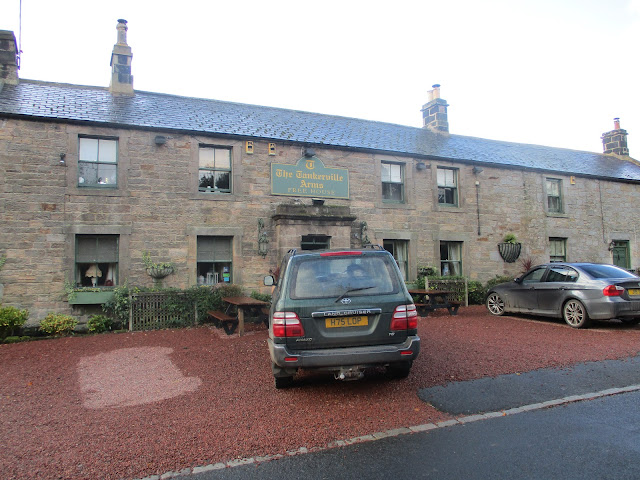 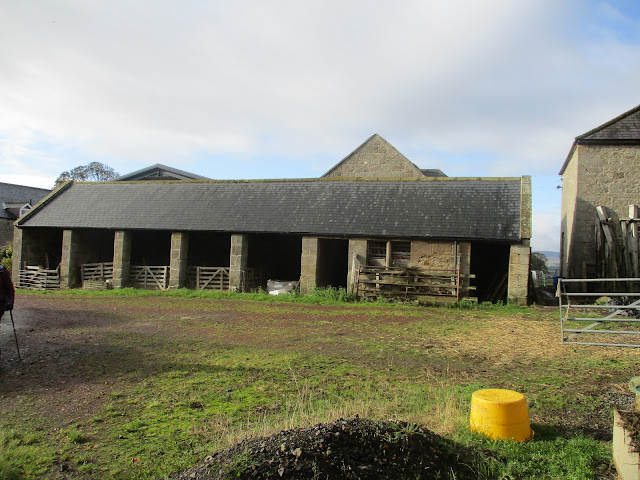 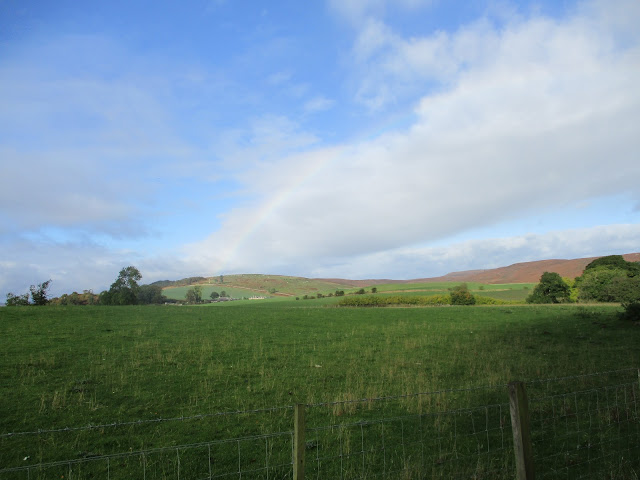 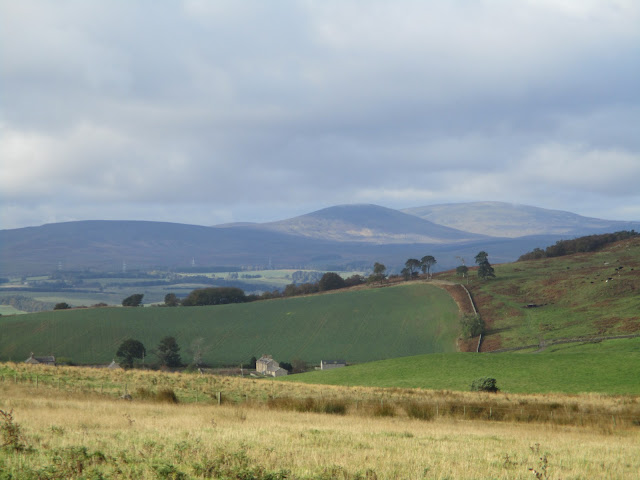 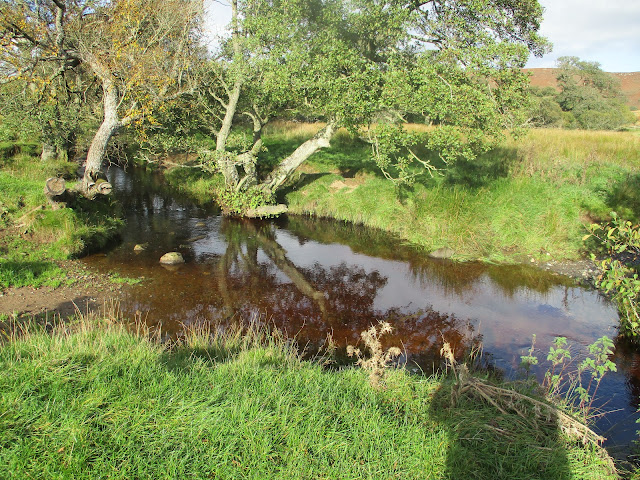 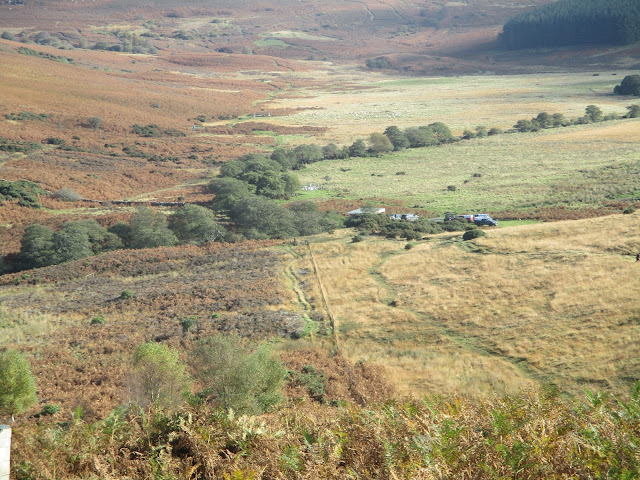 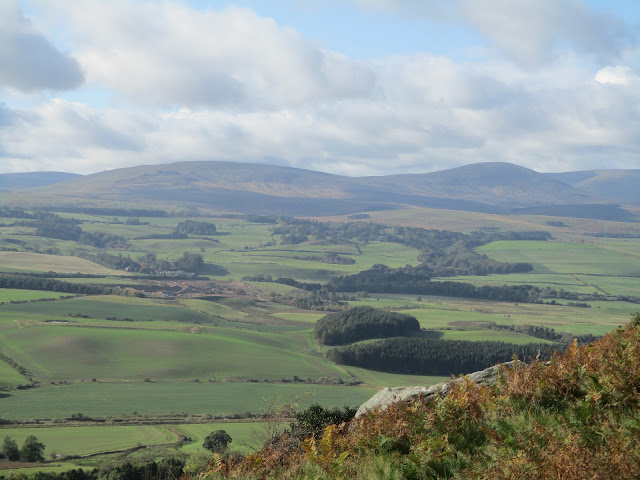 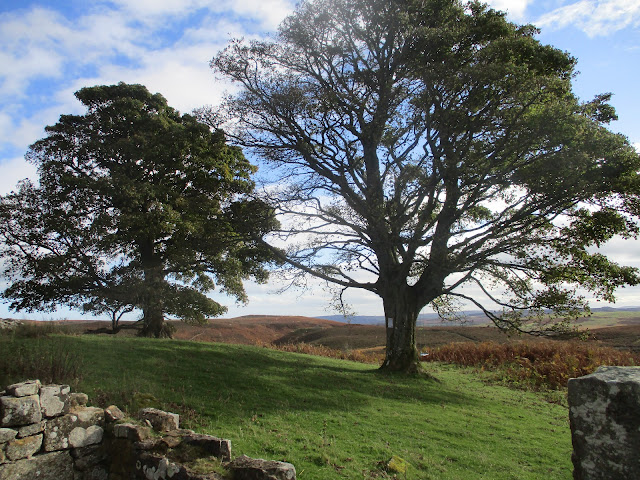 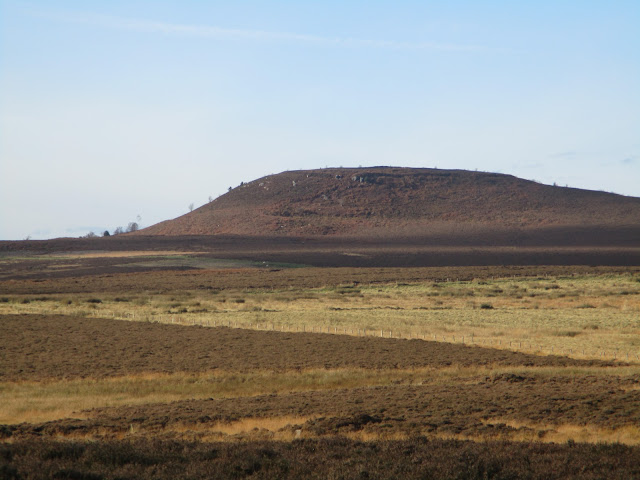 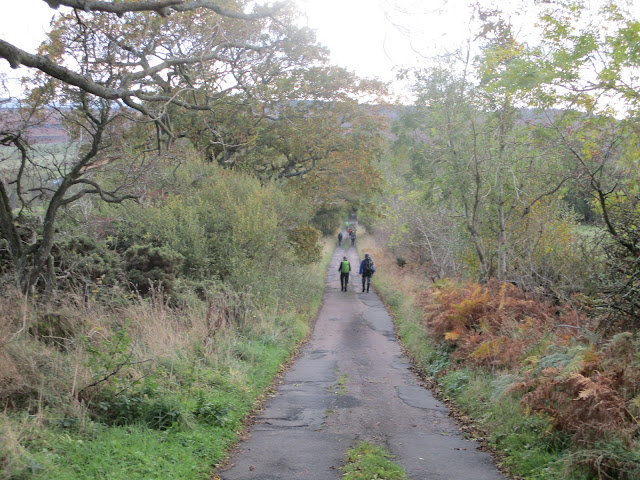