The plump Scot who does the weather forecast on local TV promised a grey day with the possibility of showers and maybe even snow so we gadgies decided on a coastal walk, one that has already been covered in Northumberland Coastal Path, September 16th 2011.


There are five of us out today, a quintet of gadgies; pun, vogel, route, halfmarathon and blog.
You can do this walk without a map but it is covered on OSLR75 Berwick upon Tweed and surrounding area.
We started the walk in Seahouses, a small Northumbrian fishing port and holiday town with several fish and chip shops and the possibility of a trip out to the Farne Islands by boat. We drove to Seahouses, north up the A1 until we turned right at the road junction on the B6437, through Christon Bank, close by Beadnell and finally to the town itself. There is a large town centre car park at GR218320, convenient for the tourist information office although it was closed, and just round the corner from Trotters Bakery and Cafe
where we  had breakfast. The bread roll were fresh, and large, but sadly the bacon was already fried, a bit cold and a bit tough, 3.5 flitches. Plenty of tea though.
Kitted up we prepared to start. The last time we did this walk we walked out to the back of the car park and across fields to Bamburgh. Brian the punmeister, very wisely said we could walk through the grassy fields and get wet  or walk on the beach.
We headed for the sandy beach, but not before Harry the routemeister had bought a new pair of over trousers as the forecast was for rain and he had forgotten his. 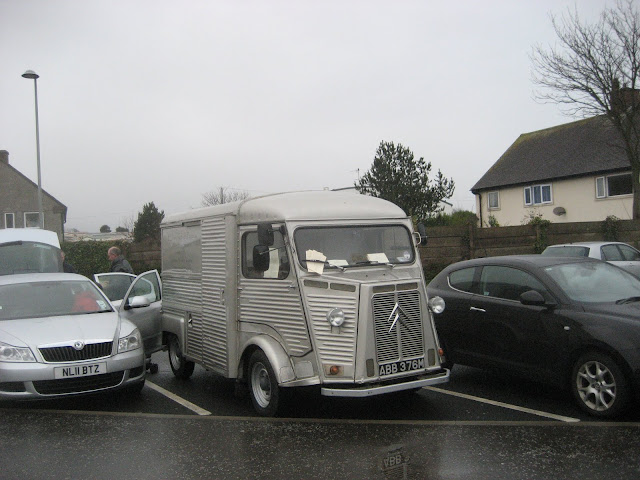 This is the sort of vehicle we would have crossed the road to see. An old Citroen used as a mobile patisserie in Seahouses. Not very mobile, it was still there at the end of the day.
Fish and chips! There are two f and c shops in this picture of the centre of Seahouses. 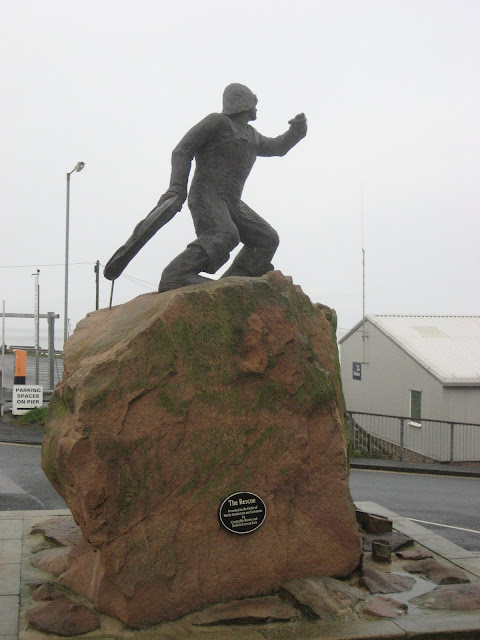 A statue commemorating the Lifeboat men of Seahouses.
The most famous rescue is that carried out by Grace Darling, daughter of the keeper of  the Longstone Light on the Farne Islands, a few miles off the coast at Seahouses. On a stormy night in1838 Grace and her dad rowed to the wreck of The Forfarshire in an attempt to save crew and passengers. Sadly Grace died
of tuberculosis in 1842 at the age of 26. There is a museum devoted to her in Bamburgh village.
﻿
The beach at Seahouses is, like many others on the Northumbrian Coast, a sandy stretch with rocky outcrops and small tidal pools. We saw a good variety of sea birds on the walk including, three Brent Geese, a pair of Red Breasted Mergansers,  Purple Sandpipers,Red Shanks, Green Shanks, Dunlins, Eider Ducks and the lovely little clockwork Sanderlings.
I am not very good at bird recognition but having, for once, brought a field guide, I became important, confirming sightings, but we did argue over one gull which looked like a Laughing gull but is very rare in the UK  as it lives mostly in America.
After a couple of sandy miles we past Bamburgh Castle. 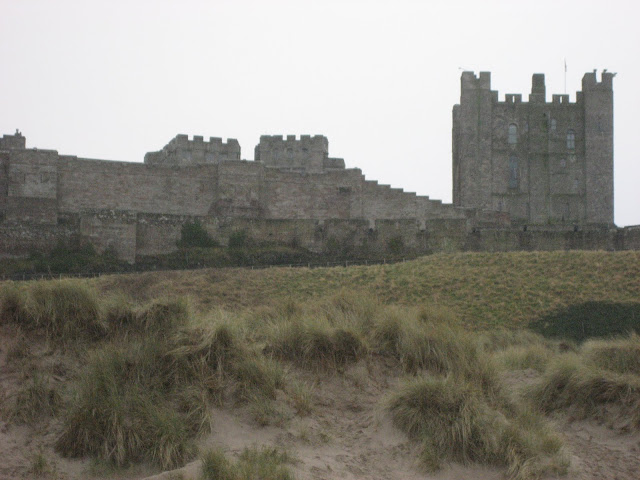 Bamburgh Castle. Magnificent. There is evidence of a Stone Age Settlement on the rocky outcrop and also of Roman and Saxon work. The large central keep was started in the 12th century and, like Topsy, the castle just grew and grew.
Not far beyond the castle are some concrete cubes, invasion defences left over from World War 2.
Somebody with a sense of humour has painted them...... 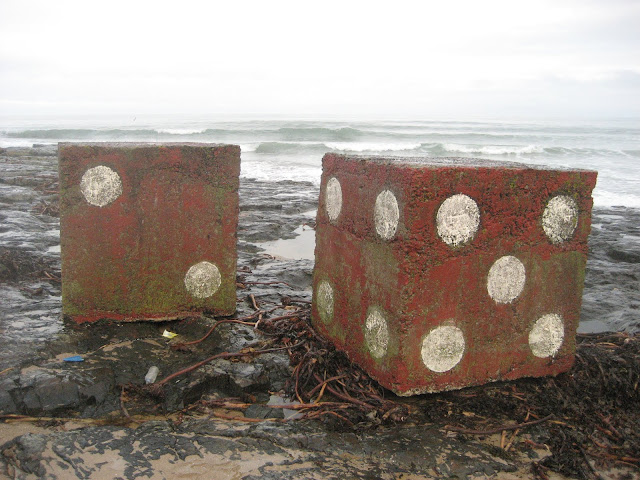 Mathematically, or dicically correct, opposite sides add up to 7 but we didn't check the bottom.
﻿
﻿
About a mile beyond the castle is a spot called Stag Rock with a lighthouse above the beach.
We decided this would make an excellent Herbie Spot, a small lagoon, rocks offering shelter and the castle completing the scene. Marked on the map as Harkess Rocks, the local name is more appropriate.
﻿ 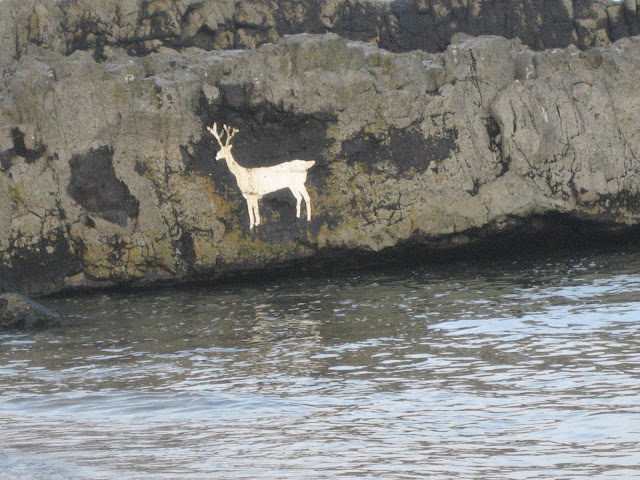 Stag Rock, really pleasant spot to stop, even in January. 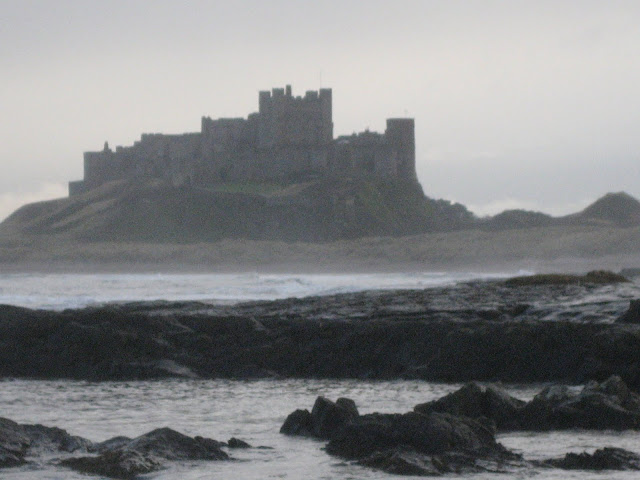 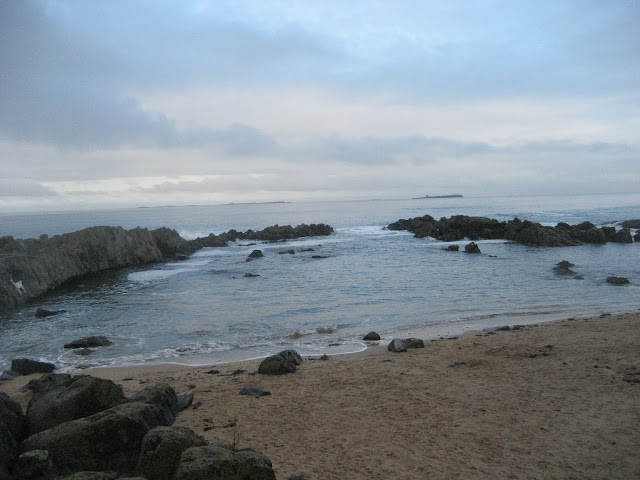 The views from the rocks that made a table for the Herbie Stop. Magic.

There were no mince pies today, but Dave the vogelmeister did have pork pies. I had brought some chocolate fudge, a Christmas gift from grandson Alex, and of course Ben had his delicious ginger biscuits.
Lunch over we climbed up to the lighthouse. Unfortunately this part of the path was not only steep but it was also very muddy and slippy. Harry fell and his nice new over trousers were suddenly extremely muddy. Of course we laughed. Back to the beach . Normally we would walk round the headland and stroll along the edge of Budle Bay but the tide was coming in. Brian and I decided to run across the sand of a mini bay between waves. Brian made it but I mistimed my run, was caught by an incoming wave and soaked to my calves. Not even HiTec boots would keep the water out. Brian laughed and mused "Why do we laugh at a friends misfortune ?" Of course the Germans have a word for it Schadenfreude, meaning harm and joy. They would have. Bet they don't have much over the fate of countries like Greece as they have to bail them out! 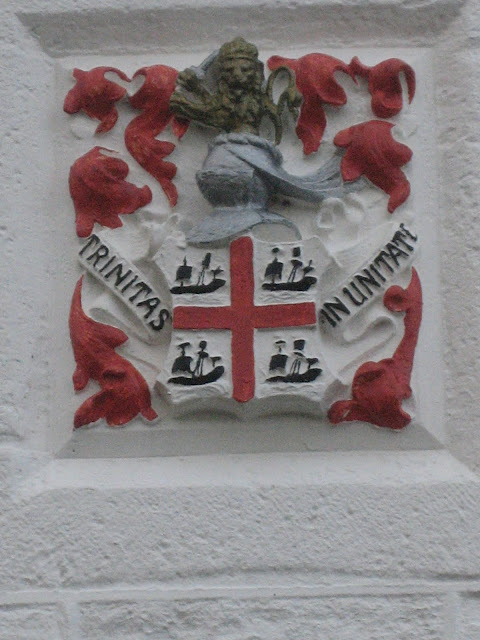 Three in one, the motto of Trinity House, the organisation that is the lifeboat service in Britain. Run entirely by voluntary contributions and fund raising.

We walked on the edge of Bamburgh Golf course to Heather Cottages, fine looking holiday lets by the look. From there to Newtown and across a field to the B1342 which goes to Bamburgh Village. Turning left we walked a few hundred yards on the road before spotting the Northumberland Coastal Path ( An italic N in blue) sign post that sent us across fields with a small wood on our right and a large quarry in the distance. Soon we came to Warren Caravan Park, not surprisingly very quiet. The path is well marked  and soon we reached Spindlestone Mill, formerly exactly that, now a block of "luxury apartments" or flats. 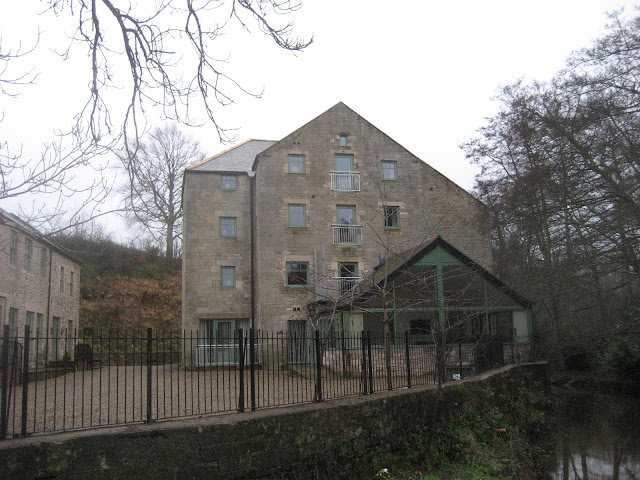 Spindlestone Mill. Inthe 18th and 19th centuries this mill. with Warren Mill were important grain grinders. The produce was exported through a small jettyy in Budle Bay.
From Spindlestone Mill we followed the road uphill to the wonderful Outchester Ducket. Yes,  Outchester was a Roman camp but not for gay legionnaires, the name means "the camp where owls can be seen."
The Outchester Ducket was built as a Dovecot, ducket being the local way of pronouncing that word.
It was built in the 18th century and was also used to store food and manure, not together hopefully.
﻿
﻿ 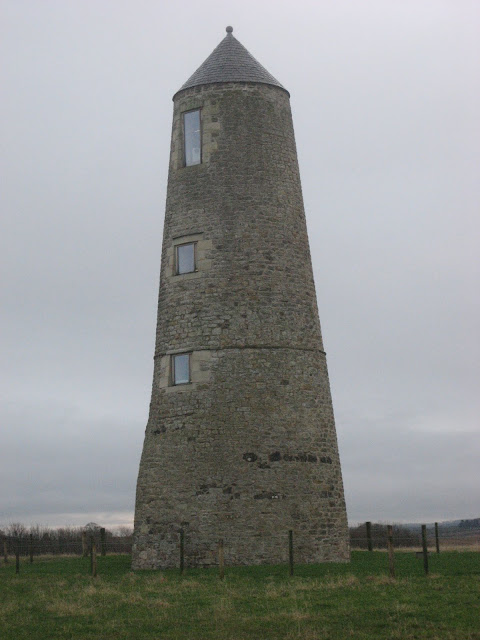 Now a luxury holiday let, descibed as being an ideal Honeymoon spot, the Outchester Ducket has one room on each floor and views out to sea,
Walking west from the ducket, which is incorrectly marked as a windmill on the OS map, we turned right at the next junction, took the left fork after a few hundred yards and then followed the signpost on the left which took us in a very straight line across a field and down to what had been Belford Station. We crossed an old line that had originally been used to bring stone from Easington Quarry to the main line and arrived at the main east coast railway from London to Scotland.
A notice advised us to ring the signal box before crossing the tracks. Brian made a grand job of phoning and we were asked to wait until the approaching train had passed. We did and just as well. it appeared very quietly but at high speed.
﻿ 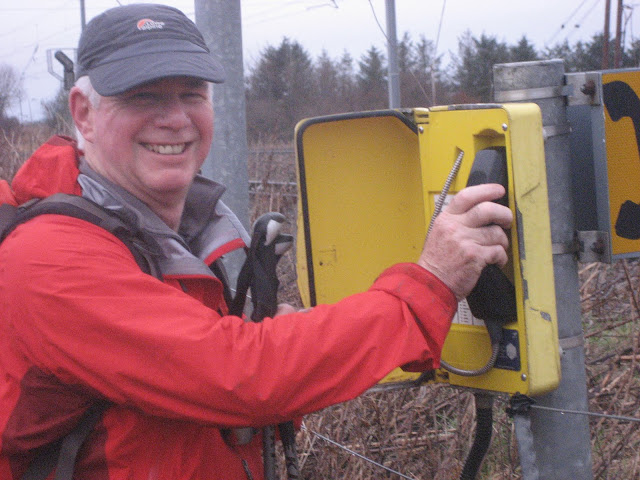 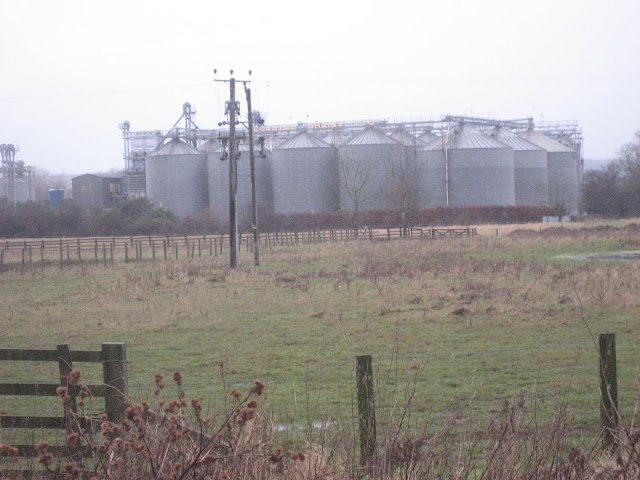 Having crossed the line safely we informed the signalman and continued on our way past the huge Belford Grain Store.
﻿

Belford Granary, almost at the end of the walk.
Beyond the grain store we crossed the A1 and headed for Belford Village to catch a bus back to Seahouses. We were late, had no chance of getting there so waited at a point on the road where a bus could pull in. The bus appeared almost immediately and we flagged it down some of us by assuming a position pf prayer. It worked, the driver stopped and some twenty minutes later we were back in Seahouses, changed and heading for the Olde Ship Inn. An excellent, five barrel pub offering Directors and Farne Island beers among others, and coffee too.
On the drive back we were entertained by a compilation CD called Girls, each track having a girls name in it, like Cathy's Clown, Eleanor Rigby and Sylvia's Mother. a real weepie.
Another good day out, and hardly any of the promised rain.
MATRIX MMXIII
steps                              miles