January brings the snow,
Makes your feet and fingers glow,

But we gadgies don't really mind,
We walk in weather of  any kind.
Except very heavy rain.
The first two lines I have pinched from Flanders and Swan, hope they don't mind too much.
The weathermen have promised that today, January 18th, the whole country will be hit by snow coming in from the west and spreading slowly to our part of the country.  It should arrive in the North East of England by 4pm so we have decided  to have another bus pass walk, from Consett in County Durham to as near Gateshead as we can get before the snow starts.
There are six of us out today, pun, route, vogel, music, halfmarathon and blog. This is another walk you can do without a map but if you insist the walk starts on OS Explorer 307, Consett and Derwent Reservoir, cuts across a corner of 308, Durham and Sunderland and finishes on 316, Newcastle upon Tyne.
A word about photographs; I had been using the macro facility to take close ups of Russian Dolls and forgot to go back to Auto so all the pictures are fuzzy. Actually this is an attempt to represent the day as it really was, with all views distorted, disfigured and purposefully put out of focus as the blinding blizzard struck and blurred our minds and vision.

We caught a bus (No. 46) from the now familiar Eldon Square Bus Station to Consett, high on a hill in County Durham and once a producer of iron and steel for the industries of Tyneside and Wearside.
The Atholl cafe near the bus station in Consett may not be at the top of the culinary tree but it is popular, friendly and does a mean bacon butty. A brown bun, nearly as big as the plate, plenty of bacon and pots of tea. My own, and very personal criticism is that my teapot was a bad pourer, splashing the liquid into the saucer. On the plus side this allowed me to practise for old age by slurping out of the saucer. We awarded the Atholl 5 flitches.
Fed and watered  we walked past the town church, wandered up a street in a north west direction and down a hill to the start of  the DERWENT WALK, the disused railway line, converted to footpath and cycle way, that would lead us back home. It was cold, but bright and sunny. 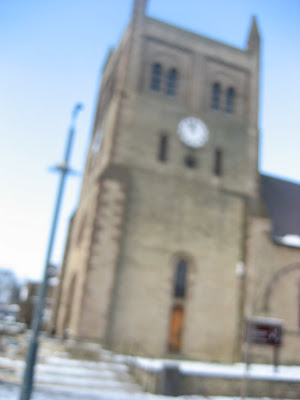 Leaning slightly, this is All Saints Church in Consett,

The walk is a good choice today because it lead gently downhill all the way to Tyneside, it is sheltered by trees on either side and offers vistas across the valley. In spite of going from one old industrial area to another it is nearly all in the country, fields on both sides with wooded stretches offering the chance to spot birds for the vogelmeister.
Shortly after leaving Consett we passed Shotley Bridge Hospital on one side and the Consett Golf course on the other.and soon we were above Ebchester, the village used as a starting point for a walk a few weeks ago. (See To the Boathouse)
So far we had been walking slightly east of north but after Ebchester the old railway turns to the east as it passes Hamsterley.
Naturally as the walking was easy we made quite good pace and chattered in our usual frivolous way as we headed downhill. Mostly we dragged up "one hit wonders" from the late fifties and early sixties, that period between the first appearance of Rock and Roll and the Beat Boom. Bland American singers like Johnny Tillotson, Bobby Vee,  and Fabian. Nobody could remember who sang "Here comes Summer," but some senior gadgies could give a good rendition. 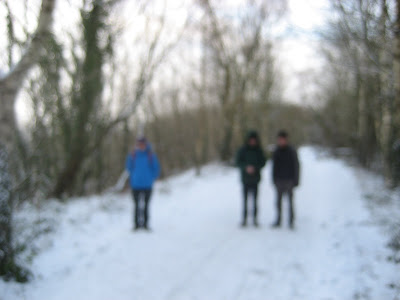 Looking through a glass darkly, or one needing cleaning.
Not far beyond Hamsterley we stopped at the old Linzford station for lunch. A comfortable Herbie Spot with a platform to sit on and a bridge to offer shelter from the storm, should it arrive. 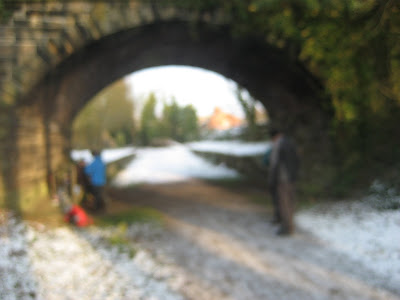 ﻿
Linzford Station, now a Herbie Spot.
Nothing different about lunch today either, sandwiches, pork pies and Ben's homemade ginger biscuits. Harry and Ben almost missed lunch as they had walked ahead, deeply engrossed in a conversation righting the wrongs of the world. Gadgies are not only blessed with bus passes, they are also telepathic and the pair soon returned.
There are several magnificent viaducts on this old railway line, standing as attribute to those great railway engineers. They provide spectacular views as they cross the River Derwent, even in winter when the trees are bare. 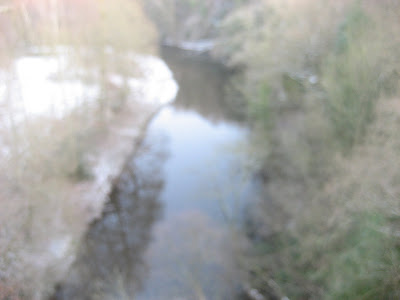 Fuzzy River Derwent taken from one of the viaducts.
There are four Derwent rivers in England, in Derbyshire, Yorkshire, Cumbria and Durham/Northumberland. The name means "The river with an abundance of Oak Trees..

Several years ago Red Kites were reintroduced to this area and they are thriving. We got a fine view of one as it circled above us at Linzford Station as we lunched. Quite low its markings were clearly visible. It was probably after Harry, he's the smallest but it would have got more pickings off me, or Brian.
Near Rowlands Gill there is a kite observation point overlooking the village. Sure enough  some of them were out, we saw five, looking for tea.
At Rowlands Gill the path follows the road past Maguire's Fish and Chip shop, (tempting)  before rejoining the old line. At this point, about 3pm the snow finally caught up with us. Suddenly I shouted "It was Jerry Keller!" The others agreed, he had been the one hit wonder with "Here Comes Summer". The punmeister claimed JK had also sung about a petrol container, Jerry Can.
Snow was falling quite heavily and after about a mile we  turned off and walked through the Derwent Walk Country Park until we reached The Red Kite pub at Winlaton. Yards away was a bus stop and minutes later a bus bound for Newcastle appeared.
Back in the city we headed straight for The Five Swans, a Wetherspoons pub on St. Mary's place near the Civic Centre. The Abbot was in excellent condition so we had another, although some had London Pride.  Five barrells today Mr. Wetherspoon.
Refreshed we set off in different directions through the snow, now falling quiye heavily. Another good gadgie day out! 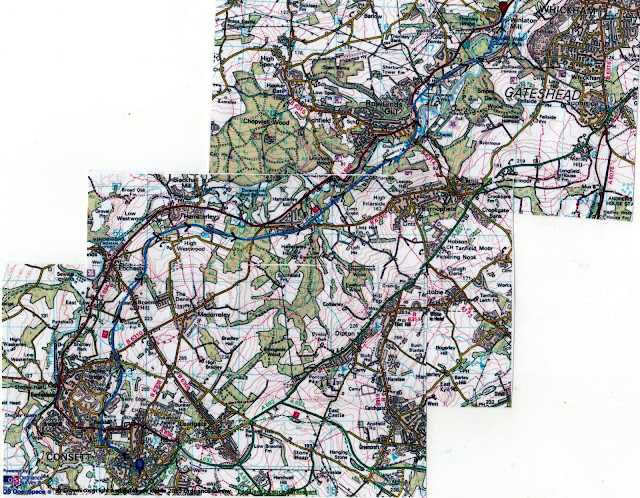