Святой Остров
This was not, strictly speaking, a gadgie walk although there were several bus pass holders taking part. It was a stroll round Holy Island with the "Russians", an ill assorted collection of people who can speak that language or have tried to learn a little. (I have GCSE grade C, and am very proud of it. ) The party included Ukrainian Irina, the lady who tried to teach me, Siberian Irina, wife of Jeremy, the Powells* John and Lizzie (MFA) and daughter Kate, plus several others whose names I have forgotten.
Holy Island is easy to find from Newcastle; take the A1 north to Beale, turn right and drive over the causeway. BUT be careful and read the tide tables for crossing times before you go, otherwise you will finish up as a news item on BBC Look North.
The news reader will put on sad face and tell the viewers that another family or couple have been forced to scramble to the refuge on the causeway as their car was halted and swept away by the tide. Even better if they have a dog. Happy faced newsreader will then inform us that the refugees were saved (unless the dog is lost in which case no happy face) and finally serious face will tell us that this is the 57th time this has happened this year and that people should take more care and that several local councillors are considering forming a sub-committee to discuss the problem before it goes to the environment group who will then take it to the council. How about a huge notice at either end saying; "If you need rescuing it will cost you £500, so read the tide tables!"
There are many books detailing the history of the island but briefly:
Nobody knows for certain where the name Lindisfarne comes from although Eilert Ekwall in The Concise Dictionary of English Place-Names suggests  early inhabitants may have travelled between the island and North Lincolnshire which was called Lindis.
Irish monks founded a monastery  on the island in 635AD, they were invited by King Oswald (See St. Oswald's Way November 4th)  who later made it as a saint.  The monks founded a school,  used nuns to copy out gospels and spent a lot of time converting the pagan Saxons until 793AD when a gang of Vikings arrived, pillaging and raping probably, and generally wrecking the place. I think that at this time the remaining monks left, carrying the uncorrupted body of St. Cuthbert on its way to Durham. In 1083 the Bishop of Durham founded a Benedictine Monastery on the island and this lasted until the Reformation and the dissolution. The ruins of the priory remain. 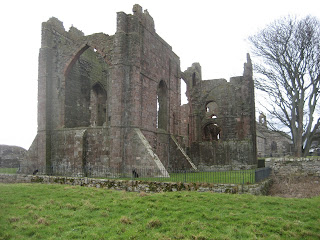 Ruins of the Priory on Holy Island.

Recently on a walk my fellow gadgie Ben, halfmarathonmeister, was telling us that he had once been best man at a wedding on Holy Island. The happy couple were met by a guard of honour carrying shot guns (no escape for him then) and that at one point in the proceedings a cake was broken over the bride's head. I was telling Kate (www.cakepoppins.blogspot.com) about this as it could be a useful sideline, nothing too exotic, easily broken, wouldn't spoil the hair etc.. She said it dated back to Roman times, she had heard of the practice in Croatia and it was fairly common in Eastern Europe. Anybody know about it? Information gladly received.


The walk;
There is a large car park on the left as you approach the village (£4.40 for a day). As it was Siberian Irina's birthday (almost) we started the walk with a glass of champagne and chocolate.
Leaving the car park we turned left and then took the first right followed by another left to take us on a footpath behind the priory. The Priory is owned by either the National Trust or English Heritage and there is an entry fee. Having been at least once we gave it a miss and walked through a boatyard  until we joined the track to the castle. On a good day the views are worth the journey, the Farne Islands and Bamburgh Castle to the south, the Cheviot Hills to the west and the sea to the east, but today was overcast.
Lindisfarne Castle is also a National Trust property. It was built in 1549 and was used until 1819 as a garrison, later by coastguards and then sold in 1902. The owner, Edward Hudson, employed Edwyn Lutyens to do the redecorating. Outside there are some upturned fishing boats, part museum, part information centre. 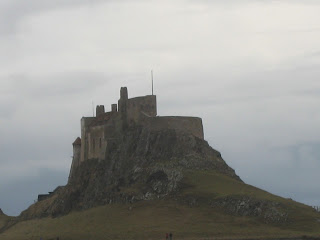 Lindisfarne Castle, built on an outcrop of the Whin Sill. (Obviously still wanting to teach a bit of Geography)

A few hundred yards from the castle, on the eastern side, is a walled garden. It was laid out in 1911 by Gertrude Jekyll as a place for her to hide!  It is quite small with three high walls and a low south facing wall. It is paved, many of the plants growing between the stones.

But a few hundred yards south-east of the castle are the best lime kilns I have ever seen in Northumberland, and there are many. From the top all that is visible are six circular stone lined holes, carefully fenced off of course. Walk past and down the bank and there are the entrances to the whole complex, almost as they were in the 19th century.
A Dundee company built them in 1860, stone was quarried on the north side of the island, coal was brought in by sea and the lime exported from a jetty north of the kilns, some fragments of its timber still visible.  We all went in to look round, it was amazing, I got so carried away I forgot to take a photograph of the outside but here is an interior shot. 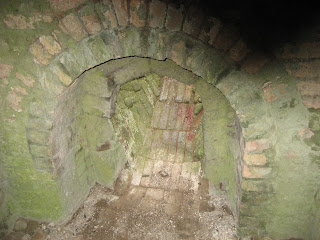 Lime Kilns on the inside.


After the excitement of the lime kilns, John Powell, looking out to sea and with all the knowledge of the sailor that he is, explained to us the different meanings of the buoys we could see. Should he ever join us on a Friday he would have to be yacht/motorcyclemeister.


Continuing along the east side of the island we saw a large flock of Brent Geese on the sea, cormorants and a heron before we came to a small pond with a bird hide. A fine place to watch the moorhens and ducks, an even finer place to knock back the vodka and brandy that were on offer!  By now it was raining so once out of the hide we walked north a little before finding the footpath that brought us back to the village and the Ship Inn. The landlord made us all welcome, he had a locally brewed bitter on offer and some very good lunches, served with chips. For once I was not driving, what  a day out. Short by gadgie standards but very enjoyable at 3.6 miles, which could be extended. And a walk suitable for very small future gadgies too.
* Read John's account of his motorbike ride across Canada at http://nortontranscanada.blogspot.com/2006_07_01_archive.html
Wonderful reading.

Thrilled to see I have some Russian and Ukrainian readers аgain