Martin in the Fields....... May  the 4th.
which happens to be Jedi day, apparently, although Dave and I were the only two people in the western world who didn't know.

If you were to ask someone which famous artist came from the north east of England I suspect, apart from a stunned silence, you would probably get Thomas Bewick as an answer. Thomas did for wood engraving what Simon Ushakov did for Russian icons.
Google them.
Some may answer John Martin.  He was born in Haydon Bridge in 1789, was apprenticed to a coach builder in Newcastle but in 1806, having broken his apprenticeship, moved with his new master, an artist to London.
Martin became one of England's Romantic artists, painting huge canvasses (10 feet by 8!), many with Biblical themes such as the destruction of Sodom and Gomorrah.
Supposedly he was influenced in his work by his walks around Haydon Bridge, particularly along the River Allen. 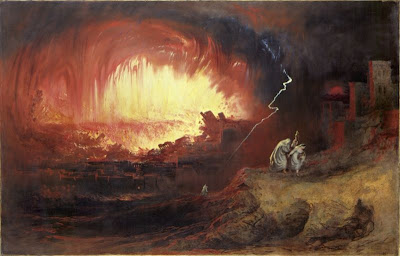 The Destruction of Sodom and Gomorrah by John Martin. Oil on canvas of course.
Now that's art, much better than a pickled fish or an unmade bed.  If you look carefully you can see Mrs. Lot as a pillar of salt and Mr Lot and daughters escaping. Serves her right for not doing as she was told. Paul Daniels likes this picture, not a lot, but he likes it.

Today's walk is following the John Martin Heritage Trail which begins and ends in Haydon Bridge.  There are three of us, vogelmeister, punmeister (who told us it was Jedi day) and me the blogmeister.
To get to Haydon Bridge from Newcastle take the A69 and turn right into the town. You may park in the station car park or turn off to the left before you cross the river and after about a quarter mile find the Shaftoe School where there is a small car park.
We could not find a cafe in Haydon Bridge so the flitch score is a definite zero.
If you need a map OS 43 is the one and the school is at GR844641 but better still go to the newsagent on the street to the station and get a free John Martin Trail brochure which includes a map. And follow the trail markers, they have green arrows and the helpful words "John Martin Trail".
Our walk starts at the school car park. Walk down the track a few hundred yards to the road and almost directly opposite is a lane with a few stone built houses on the right hand side which lead to a caravan park. This is the John Martin Trail and after less than a quarter mile you are at East Land Ends, the cottage where the man was born. 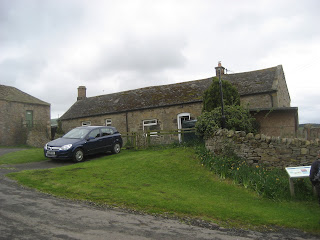 John Martin's birthplace. In his day it was at least two cottages and there wasn't a car.
There is a commerative plaque on the end of the building but my photograph of it is slightly out of focus. On the silo belonging to the farm on the left of this picture is this terrific notice: 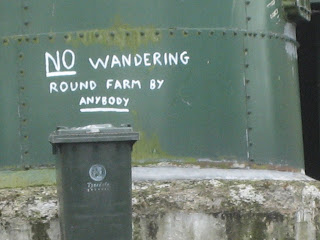 From here the walk continues in a generally westerly direction across a succession of fields mostly inhabited by sheep. Go through the yard at Lees Farm and turn left to walk uphill but still towards the west. After three more fields the walk reaches a minor road, turn left and then at the junction turn right. After a couple of hundred yards a marker (remember they are GREEN ) directs you to the left across a field and then into Morrallee Woods and the Allen Banks Nature Reserve which is run by the National Trust. They too have walks here, marked in PURPLE. The path goes by a small tarn that appeared to be uninhabited and then winds steeply downhill to the River Allen.  The footpath follows the river bank to Plankey Mill which is usually a camp site and picnic spot  but a large sign said simply "Sorry, Closed" 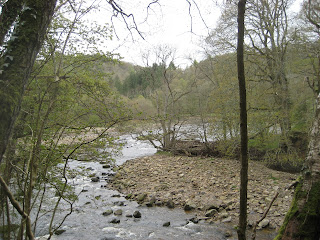 The River Allen near Plankey Mill
Nevertheless we made the stones on the bank a Herbiespot. Dave had brought pork pies, I had Ringtons Ginger biscuits and of course we all had sandwiches.
Plankey Ford nearby was once known as "Planky Ford, alias Nakedale". The Nakedale bit is possibly a reference to flooding in spring, coming from "eal" an island thus formed but I can't find where or who or what Planky was.
Lunch and idle chatter over we carried on. From Planky Mill John's trail crosses a couple of fields before entering a wood. Soon the short but very steep climb to the ruins of Staward Peel. There is an alternative that avoids the climb but the effort is well worth it. On a peninsula, like a mini Durham Cathedral and Castle, Stawards Peel was built in the 14th century and would have been very difficult to attack. 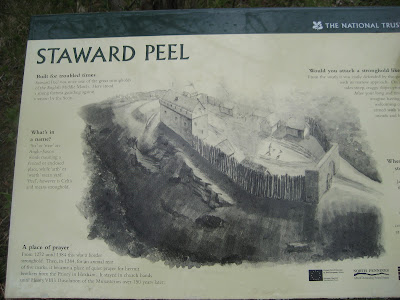 Information board at the peel. In the 17th century it was dismantled and the stones used to build nearby Staward Manor. An early recycling effort. 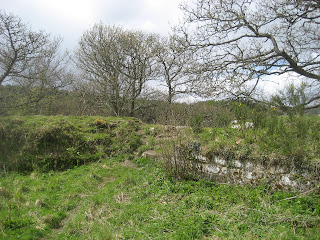 All that remains of Staward Peel
Leaving thre ruins the path is narrow with steep dtrops on either side until it emerges into a field, disappears back into a wood winds down to a stream and climbs up again to cross more fields. 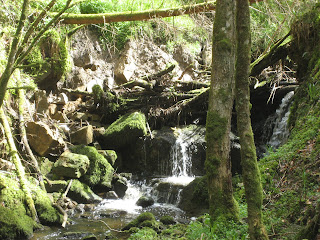 We saw a single solitary deer near here.
I was a bit disappointed at this point that we did not divert to a farm called Sillywrae.
It means the nook where Sallows or Shrubby Willows grow although tradition says it means Happy or Innocent nook. I like it not only for its name but the farm is horse powered, all machinery is pulled across fields by magnificent shire horses.It reminds me of childhood days spent on my uncle's farm near Haworth in Yorkshire. (Yes that Haworth)
Having crossed five fields some alongside woodland that was being cut,turn left on the road. At the junction take the path directly opposite across fields  that lead to the farm at West Deanraw. At the end of the farm lane turn right and walk along the road to Langley Castle. Built6 in 1365, destroyed in 1405 it was remodelled in 1890 and is now a hotel and place for weddings. In the 1970s when it was fashionable to stage mock medieval banquets Langley Castle was a popular venue. 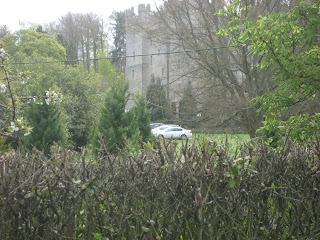 Langley Castle
Just past the entrance to the castle the path is signposted on the left to Threepwood, meaning a wood whose ownership was under dispute. More fields, a small piece of wood land and the trail is back on a road. Turn right then take the left fork, under the road bridge and turn right into a smallpark which brings you jnheatly back to the car park at Shaftoe School.
Dav'e ASDApeds gave an average of  10.5 miles, my Higear said 10.4 and the Outdoor App which worked for once, said 9.9 miles. Using a map measurer Dave and I both got abou 10 miles. The brochure quotes a little under 11 miles but that is from the station. Most of the walk is easy, there are a few steep climbs and after the recent rain it was a little slippy in places, but a good day out.
On the way home we stopped at the Boathouse pub, next to the railway station, in Wylam. A paradise for real ale lovers, I think there were 14 different beers on offer. I chose "Arkwrights: Trouble at Mill", just for the name. And it was, at 4%, an excellent beer, slightly darker than some of the beers produced in microbreweries these days. We plan to have a bus walk that finishes in this pub and catch the last train back to Newcastle if we can.
Nature notes. We saw swallows, blackbirds, a blackcap, yellowhammer, chaffinches, chiffchaffs, sandpipers, grey wagtail, pied wagtail, pheasants, mallard ducks, eggs thatb had probably been taken and eaten by stoats or weasels and herons, plus the deer. 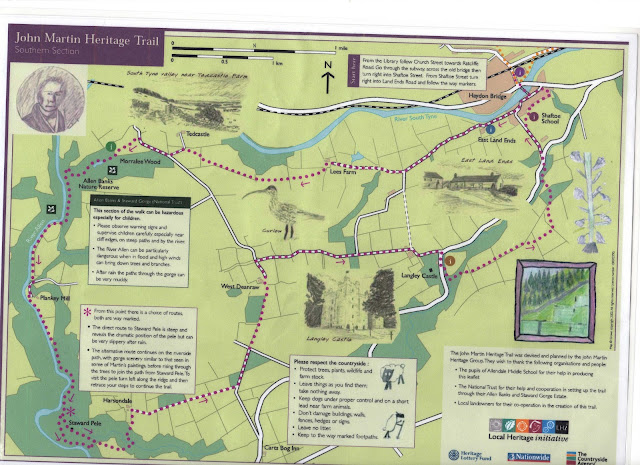 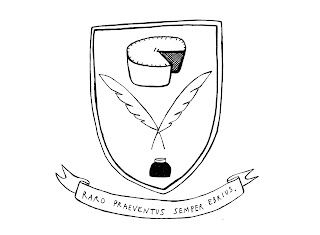